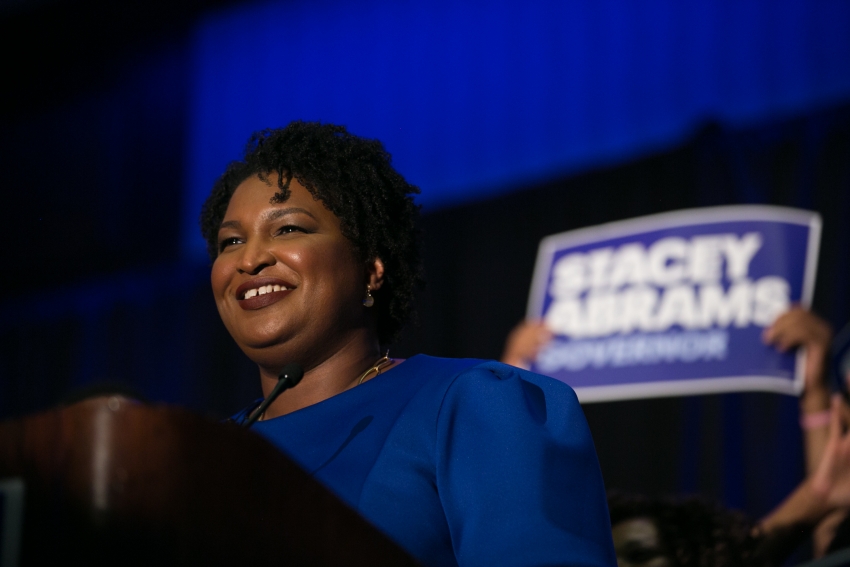 Stacey Abrams had the support of organizations that spanned the gambit of the “establishment” while running on a strong progressive platform. (Photo by Jessica McGowan/Getty Images)

Recent elections show that in 2018, centrists no longer reign supreme.

In many ways, the Democratic establishment has accepted that supporting positions like Medicare for All, legal marijuana and a $15 minimum wage is where the base is at, and has essentially conceded the point.

The elections across the South saw a broad range of outcomes, from Stacey Abrams’ win in Georgia to Laura Moser’s loss and Gina Oritz Jones and Colin Allred’s victories in Texas. Though pundits have tried to impose an establishment versus insurgents narrative on most of the 2018 Democratic primaries, what has largely occurred is that progressives have won the battle to redefine what an “establishment candidate” actually is.

Abrams had the support of organizations that spanned the gambit of the “establishment” while running on a strong progressive platform and her campaign centered mobilizing black and low-income voters, displaying a radically different theory of politics than the dominant view in past elections of courting middle-class moderates, which has largely proved unsuccessful for Democrats. As I noted before the election, there really was no wing of the party that opposed Abrams, making the national media coverage of the race somewhat baffling.

Jones (a lesbian Filipina who supports Medicare for All) and Allred (a former NFL player and civil rights leader) both could be considered “establishment” as each was endorsed by the Democratic Congressional Campaign Committee (DCCC) but in the first round of voting they ousted candidates with more establishment credentials and ties (Jay Hulings and Ed Meier, respectively).

In many ways, the Democratic establishment has accepted that supporting positions like Medicare for All, legal marijuana and a $15 minimum wage is where the base is at, and has essentially conceded the point. Centrist businessmen are out, progressive women of color are in and in a cycle where the party wants to mobilize progressives, women, and people of color, that’s a sensible strategy.

The most obvious lessons from Tuesday are that women continue to dramatically over perform and that progressive candidates are still winning primaries. For example, in Kentucky’s 6th District Amy McGrath defeated Blue Dog preferred Jim Gray, following other upset primary wins in last week elections, such as Kara Eastman in Nebraska and Talley Sergent in West Virginia.

And finally, while these elections all took place in red states, the results show that grassroots activism, a focus on healthcare and a mobilize-the-base strategy could produce big victories, as elections are increasingly decided by whether a party’s supporters turn out to vote, rather than persuading voters of the other party to flip.

Below are highlights from Tuesday’s Democratic primaries across the country.

Governor: This was the marquee race of the night and attracted the most attention, which was always somewhat perplexing. The Democratic primary winner Stacey Abrams, who ran on a progressive platform, locked down support from seemingly every wing of the party—from Our Revolution to EMILY’s List—and given the political climate and the overwhelmingly African-American primary electorate, she was the favorite to win. In many ways, the media was trying to create a race here that never existed. Abrams goes into November as an underdog, but she’s banking on mobilizing black voters and progressives through campaigning on issues like Medicaid expansion, which would insure 240,000 people.

According to recent polling, three in four Georgians support Medicaid expansion, including 57 percent of Republicans, but Republican politicians have refused to expand the program because of racism. Abrams will face off against either Casey Cagle or Brian Kemp, who have been in a competition to see who can embrace more overtly white supremacist rhetoric. The winner on the GOP side will be decided in a July 24th run-off.

GA-01: Our Revolution endorsed activist Lisa Ring won her primary with a majority of the vote, meaning she will take on Earl “Buddy” Carter in November. Trump won this district by 15 points last November.

GA-06: Lucy McBath, whose son was murdered by Michael Dunn in 2012 over loud music, won a plurality in the first round and is the favorite going into the run-off against businessman Kevin Abel. She’ll have more time to establish name identification and fundraising she lacked this round due to her late entrance into the race (making her performance impressive). She’s running on healthcare for all, gun safety and reproductive freedom. Incumbent Karen Handel, whose controversial tenure at Komen for the Cure involved overseeing a debacle that compromised women’s health and served as an embarrassment for the organization, is the perfect foil for McBath, a two-time breast cancer survivor.

Senator Kirsten Gillibrand, an early supporter of McBath, tells me, “I was proud to support Lucy McBath because she will fight hard to make sure no one else loses their child to senseless gun violence the way she did. As a mother, a businesswoman and social justice activist, we need more people with her life experience serving in Congress.”

GA-07: Public policy professor Carolyn Bourdeaux won a plurality of the vote and is the favorite against businessman David Kim in the July run-off. The winner will take on Republican Bob Woodall who has raised bafflingly little for an incumbent in a district where Trump won by single-digits, and he will be vulnerable in this pro-Democratic environment.

AR-02: State legislator Clarke Tucker will face French Hill in this 42 Clinton, 52 Trump district (the ten point disparity indicates some third-party voters a Democrat might be able to win in a favorable environment).

KY-01: Our Revolution endorsee Paul Walker handily won the primary to take on James Comer in November. Trump won this district 72 percent to 24 percent and will be a tough pick-up even in a wave environment.

KY-06: This is a somewhat baffling place for a $3 million Democratic bloodbath, but here we are. This deep red district went for Trump 55 percent to 39 percent, but has some ancestrally Democratic roots (Democrat Ben Chandler managed to survive the Republican wave of 2010 only to lose narrowly in 2012). McGrath raised big money off of an early viral ad and was able to maintain that momentum through the primary.

Down-Ballot: DSA-backed candidate Richard Becker lost in the 3th5 district while Run for Something and Our Revolution endorsee Adrian Wallace will move on to the general election for Lexington City Council at Large.

Kentucky could be ripe for some November upsets: the state has shown a willingness to vote for Democrats (Democrat Steve Beshear served as Governor from 2007 to 2015) and teachers’ strike activism will likely fuel anti-Republican energy. Republican House Majority Leader Jonathan Shell lost to a math teacher mobilized by the recent teacher strike activism (please cherish the following sentence: “Shell did not answer a phone call from The Associated Press seeking comment after the race Tuesday.”). Shell was a McConnell crony instrumental in legislation gutting teachers’ pensions. Democrats ended up with progressives who can speak to that momentum.

TX-07: Lizzie Pannill Fletcher unsurprisingly won this race. The DCCC haphazardly intervened in this primary raising its profile and likely giving the Moser campaign the wind it needed to make the primary. Fletcher will face John Culberson in this district where Clinton narrowly won in 2016.

TX-23 and TX-32: In the 23rd and 32nd, Gina Oritz Jones and Colin Allred easily won their run-offs. These are two of the most exciting progressives this cycle. In November, Ortiz Jones will face Will Hurd, who has been trying to cut a “moderate” mold despite voting with Trump 97 percent of the time while Allred will face Pete Sessions in a district Clinton narrowly won in 2016.

Down-Ballot: Democrats are contesting a dramatic number of down-ballot races, setting them up to take a bite out of the massive GOP majorities in the state.