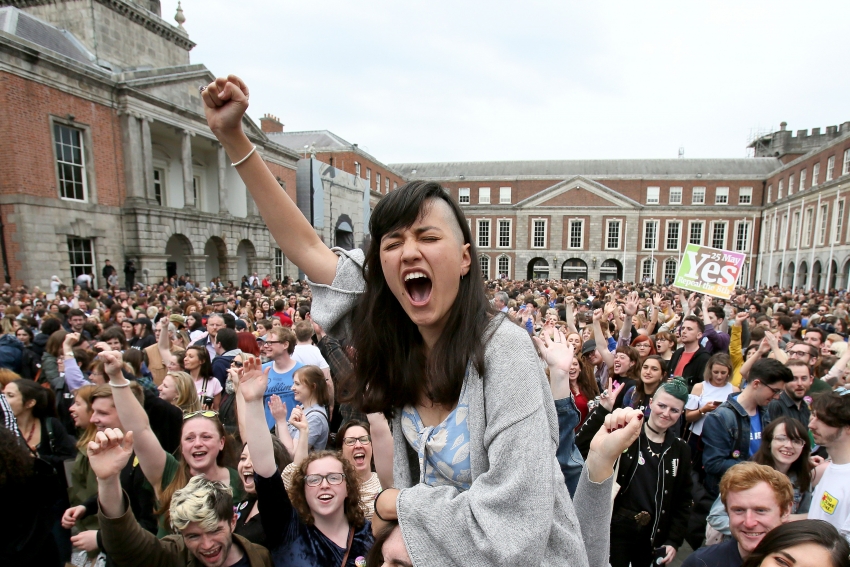 Ireland’s historic vote represents nothing less than a seismic shift for its people. (PAUL FAITH/AFP/Getty Images)

Why Ireland’s “Yes” Vote on Abortion Changes Everything

The historic vote to enshrine reproductive rights is the result of decades of organizing by Irish women—and its impact will be felt in countries across the globe.

The vote may be the biggest news to hit Catholic-majority Ireland since the country gained majority independence from England in 1922.

Crowding Dublin Castle by the thousands, packed so tightly in its cobblestoned square that they barely had room to hoist their “vote yes” placards, Irish pro-choice supporters held their collective breath, then exhaled an emphatic “YES!” when they heard the announcement that they’d finally won reproductive choice. Sobs, screams and whoops of victory rang through the streets. They’re still reverberating through Ireland and its diaspora today.

The decades-long battle to repeal Ireland’s eighth amendment—the 1983 law that gave equal value to the lives of a pregnant woman and a fetus—may be the biggest news to hit Catholic-majority Ireland since the country gained majority independence from England in 1922 (and that battle took 800 years).

The vote, tallied at 66.4 percent for yes, will allow the termination of pregnancies before 12 weeks’ gestation (and later, in some medical cases). It will spare Irish teenagers from committing suicide to escape the stigma of out-of-wedlock pregnancy. It will save women—and the children they’ve already borne—when domestic violence, poverty, or substance abuse make further childbearing too much to bear. It will help rape survivors move beyond their trauma. And it will spare 3,000 Irish women per year from “taking the boat”: making the often-solo trek to England to have a safe, legal abortion (if you can afford the four-day journey, $600 in travel expenses, and an $800 uninsured procedure performed by strangers in a foreign land).

The winning “yes” vote comes as welcomed vindication not just for the 170,000 Irish women who have obtained overseas abortions since 1980, but for everyone who supports human rights.

“This is a celebration of women’s equality,” says Susy Freelove, an artist who lives in Ballydehob, County Cork. She says Irish women who have openly shared their experiences of traveling to London to terminate their pregnancies can now finally feel a weight has been lifted.

“It’s a real sea change in Ireland in terms of how we view sexuality,” says Beth Wallace, a therapist who was born in a Dublin home for unwed mothers. “Generations of shame are falling away.”

“I myself have experienced crisis pregnancy,” adds Deirdre Murphy Youell, who manages a pub in West Cork. “I didn’t choose termination. But choice is the point. I don't have to approve of everyone else's. I should just be able to make my own, and to allow others to also make theirs.”

Comparing notes with these women this week—and reading Irish friends’ exultant emails as they flood my inbox—is hurtling me back 30 years. As a college student in Dublin in the late 1980s and early 1990s, I was involved in Ireland’s burgeoning pro-choice movement. And the vibrancy of that campaign sustained me through the most challenging time of my life, when I myself was a freckled, distraught teenager reeling from an unplanned pregnancy.

The first time I had sex with my college boyfriend, it was awkward and exuberant and the condom slipped off.  Pregnant and panicked, I decided to have an early-term abortion because I had no money or wherewithal to raise a child. The procedure was emotionally harrowing for me (I fainted three times), but its aftermath was even worse. I was 19 years old, and frightened that my Irish-Catholic family would disown me if they discovered I’d been pregnant. I also feared that Boston College—my Catholic, largely Irish-American school—might cut me off financially. My family could only cover half of my tuition, and the scholarship I needed to stay in school was provided by Boston College’s honors program, which was run by conservative priests.

Ironically, it was one of those Jesuits who would ultimately come to my rescue when the abortion’s aftershocks nearly derailed me. Though I begged my boyfriend not to tell anyone that we’d gotten pregnant, he confided in a friend, rumors spread, and gossip hounded me all over campus. Roommates who I thought I could trust whispered about me as I walked into our dorm. Wracked by insomnia, I developed visible hives and a secret eating disorder. When I started losing the grade-point average that I needed to keep my scholarship, I made the terrifying decision to tell my family about my abortion and ask them for support.

Instead of consoling me—or at least forgiving me for what is considered a sin in the Catholic Church—my family had the stereotypical Irish response. Fists raised, my father roared at me and called me a slut before throwing me out of the house. My mother and siblings hovered on the sidelines, offering no words of comfort. Repeatedly getting sick, I no longer knew if it was bulimia or if my nerves were too frayed to keep down the pasta that sustained me through my lean college years.

I told one of my advisors—a Jesuit professor of Irish literature—that I was coming unhinged and might be forced to leave school. Somehow understanding that I needed to be far away from Boston, but discretely asking for no more information, he arranged for me to transfer my scholarship and credits to Trinity College in Dublin. “Academically, it’s a much better school,” he said. “And there, you’ll learn about James Joyce’s Ulysses and its resounding ‘yes’ in a way that you never could here.” He added that he couldn’t discuss what he thought was happening with me, but he assured me that I’d find what I needed in Dublin.

At that tender and turbulent time, did I really need to move to Ireland, where abortion was not only taboo, but illegal? Did I need to return to my grandparents’ homeland, where it was not only acceptable—but expected—that parents would demonize their unwed pregnant daughters? Was it helpful for me to land at Trinity College in 1989, when four of its student leaders were embroiled in a legal battle and threatened with imprisonment for printing information about overseas clinics where Irish women could obtain abortions? Yes, yes and yes.

When I joined Trinity’s burgeoning abortion rights movement, I started processing my heartbreak and rage over my family’s and my community’s failure to respect my reproductive choice. Friends in Ireland, who shared my cultural background, sympathized with my plight. They understood that for me, my boyfriend’s betrayal wasn’t just that he’d spilled my secret. He’d failed to save my reputation by following Irish protocol: proposing marriage, offering to support our unborn child, or at least succumbing to a vigorous beating at the hands of my irate father.

Irish women talked me off my ledge, and they shared their stories, too. One activist friend announced that she’d found a pharmacy where you could buy condoms without salespeople glaring at you. A second had a birth-control mishap, obtained the morning-after pill, and reported to the rest of us that it was safe and effective. A third friend was devastated that her ex-boyfriend bowed out on his promise to accompany her to London for her abortion. She called him “Brian the Wanker”—a nickname that haunted him not just on campus, but for years after graduation.

One day as we pro-choice activists were plotting our next move against the anti-choice Society for the Protection of the Unborn Child (SPUC), someone started waving a freshly-printed copy of that morning’s Irish Independent. There, on the front page, was an image of me in mid-protest. In an iconic shot that I’ve never shown my family, I’m hoisting a banner that reads “FUCK SPUC” (the photographer cropped out the “f” to make the photo publishable). I’m wearing a threadbare poncho, an asymmetrical haircut, and an ineffable expression on my elfin face. Staring off to the side, perhaps into the distant future, I look at once both heartbroken and resilient.

In the years since, Ireland’s pro-choice movement has trudged both forward and back. In 1992, the parents of a 14-year-old rape survivor fought a protracted lawsuit—known as the X case—and eventually won the government’s permission to take their suicidal teenager overseas to terminate the pregnancy stemming from her assault. In 2012, an Indian woman named Savita Halappanavar died of sepsis in a Galway hospital because she was having a miscarriage and doctors denied her an abortion when they could still detect a fetal heartbeat. In 2016, the United Nations Human Rights Committee declared that Ireland’s abortion ban subjected women whose pregnancies carried fatal abnormalities to “cruel, inhuman, or degrading treatment.”

In the fall of 2017, spurred by years of protests, die-ins, and candlelit vigils, Ireland’s government finally moved to put the eighth amendment—which banned abortion except in cases where a woman’s life was at stake—up for repeal. The referendum came before Irish voters on May 25.

In the months leading up to this landmark vote, Irish priests railed from their pulpits and exhorted parishioners to vote “no.” Catholic doctors declared that if terminating pregnancy became legal, they would refuse to refer patients to abortion providers. Irish expats flew home to cast votes. The minister of health wrangled with anti-choice extremists in televised debates. Progressive campaigns—by the X-ile Project, In Her Shoes and the Repeal Project—lit up social media. Pro-choice advocates canvassed, proffered pamphlets, and donned buttons and T-shirts urging, “Yes!”

Three thousand miles away, from my home in New York City, I watched this all unfold with mounting astonishment. To make the case for reproductive choice, Irish women were divulging in public that they’d had abortions. This would have been unthinkable during the three years I lived in Dublin. And it inspired me to speak openly (here, for the first time) about having an abortion when I was a well-meaning, overwhelmed 19-year-old.

Why now? If the Irish activists who helped me heal are taking it to this level, it’s time for me to join their revolution. I’m a dual citizen of Ireland, which has a population of 5 million and a diaspora of 70 million. People of Irish descent need to step up and shed their own taboos.  It’s time to proclaim that yes, I endured this, and yes, it broke me in tender places, and yes, that may make me stronger in the end.

Ireland’s historic vote represents nothing less than a seismic shift for its people. But they’re far from the only ones affected. The success of the “yes” campaign offers hope that other majority Catholic countries could also legalize abortion. And it comes at a time when reproductive rights are under fire in the United States, with Donald Trump enforcing his unconscionable new gag rule and with right-wing state legislators rolling back the protections that should be guaranteed by Roe v. Wade. Ireland, lend us your fighting spirit. Inspire us to do the impossible. Spur us to change the course of history, and to emphatically embrace our own “yes.”