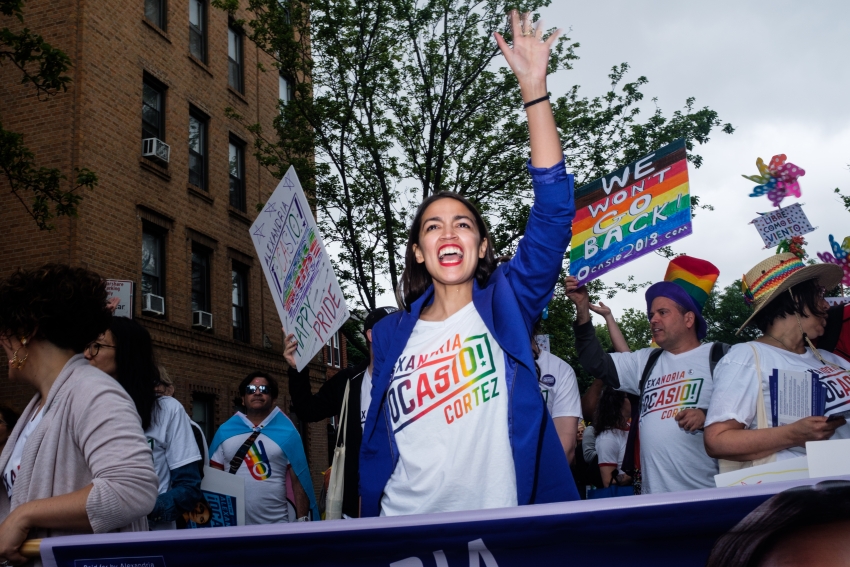 Alexandria Ocasio-Cortez’s shocking upset is the surest sign yet that the Democratic Party’s future lies in its left flank—and in challenging capitalism head-on.

The experts were wrong. A 28-year-old democratic socialist woman of color—Alexandria Ocasio-Cortez—just unseated one of the most powerful Democrats in Congress, Joe Crowley, an incumbent who hadn’t faced a primary challenger since 2004 and was angling to become Speaker of the House. New York’s 14th District is 85 percent Democratic, meaning a Latina millennial calling for the abolition of ICE and the PROMESA board in Puerto Rico, Medicare for All, a federal job guarantee and a Marshall Plan to scale up renewable energy is almost surely heading to Congress.

In the weeks leading up to Tuesday’s primary, the consensus among party insiders—and even progressives with a passing familiarity with New York politics—was that she didn’t have a shot in hell at the seat. The combination of an entrenched incumbent with deep roots in the state party machine, arcane voter registration rules, paltry institutional support and notoriously low turnout seemed like too big a hurdle for a first-time candidate to overcome. Nonetheless, Ocasio-Cortez took a lead out of the gate and won by a 57-42 landslide.

It turns out that conventional wisdom about how the Democratic Party works isn’t much good anymore. And judging by this outcome, the future of the party lies decidedly with its left flank and the army of young voters, volunteers and candidates that help make it up.

In Crowley, Ocasio-Cortez not only defeated a longtime and extremely influential New York incumbent. As Matt Stoller has pointed out, her small-donor-driven campaign also overcame Crowley’s network of supporters which included some of the richest and most powerful corporations in the country such as Facebook, Google, Blackrock, Citigroup, JP Morgan, Lockheed Martin and Viacom.

The shock victory has been compared to the 2014 upset of then-Majority Leader Eric Cantor by Tea Party challenger Dave Brat, a race that’s considered to have shifted the direction of the Republican Party farther to the right. The difference in this case—aside from Ocasio-Cortez being much more charismatic than Brat—is that she’s also an open socialist who ran on an unapologetically left platform, a stance both sides of the aisle have run full-speed away from for the better part of 25 years as the Democrats tacked center.

She also offered a common-sense, values-driven understanding of socialism, helpfully not coming from the voice of a 76-year old white man. Interviewed in Vogue on Monday, Ocasio-Cortez said of socialism: “There is no other force, there is no other party, there is no other real ideology out there right now that is asserting the minimum elements necessary to lead a dignified American life.”

From the start, her uphill campaign emphasized a mix of avowedly left politics and grassroots mobilization. Seventy percent of Ocasio-Cortez’s donations were under $200, compared to just 0.78 percent of Crowley’s. And volunteers worked tireless hours, knocking on doors, making phone calls and canvassing outside MTA stations to help overcome her lack of name recognition in the district and to get people to the polls.

“The message that we sent the world tonight is that it’s not okay to put donors before your community,” she said to supporters at her victory rally in the Bronx. What’s more, without the backing of many legacy progressive groups like the Working Families Party, the campaign itself ran a grassroots campaign backed chiefly by the likes of Justice Democrats and the Democratic Socialists of America (DSA), of which Ocasio-Cortez is a member.

Bill Lipton, Director of the New York Working Families Party—which endorsed Crowley—said in a statement endorsing Ocasio-Cortez that “the old rules about what’s possible have been proven wrong, and we’re delighted.”

All eyes now are on Cynthia Nixon, who’s also looking to take on the state’s Democratic machine in challenging Andrew Cuomo from the left for New York’s governor’s mansion. She and Ocasio-Cortez endorsed one another, and Nixon attended Tuesday night’s victory party. Other upset victories against establishment New York Democrats tonight included Liuba Grechen Shirley, in NY02, and Dana Balter, in NY24, who each ran—like Ocasio-Cortez—on shoestring budgets. That Ocasio-Cortez won on the turf of the Queens Democratic Party, among the state’s most entrenched party operations, could spell a death knell for the state machine.

Socialism in our time—and maybe even in the Democratic Party.