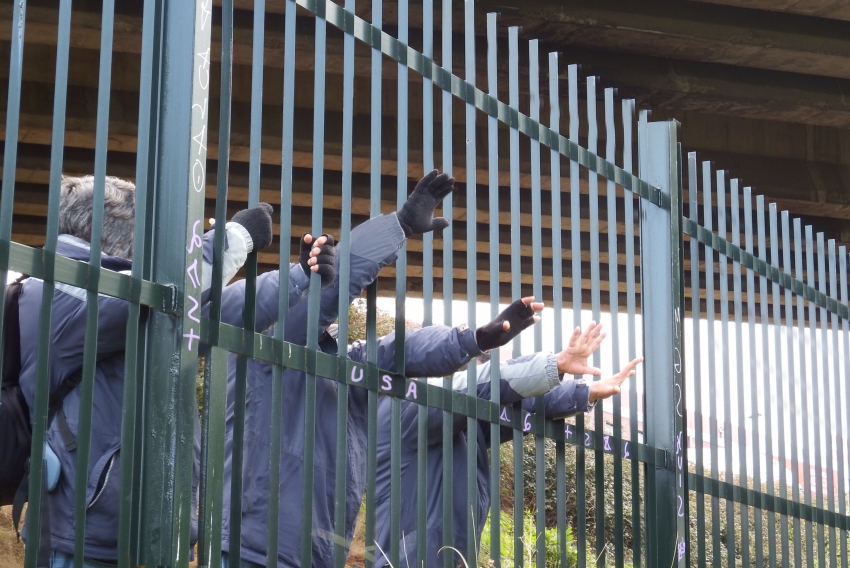 The Root Cause of the Immigration Crisis: The West’s Legacy of Violent Conquest

The Trump administration’s cruel policies towards black and brown migrants stem from a long history.

If corporations can traverse the globe in search of higher profits, why can’t workers cross borders to better their lives?

It is time to clear the air on immigration. For centuries, white people have arrogated onto themselves the right to invade and conquer the black and brown world of the Global South to extract minerals and other resources, including slaves and cheap labor. These invasions foreshadowed relations among countries that would bring us “globalization.” From the time they enslaved Africans for the convenient development of their New World, the purveyors of the emerging world order and their successors always fantasized that they could control the terms of the global movement of people and resources.

Enjoying the fruits of their labor but hating black and brown workers calls to mind early efforts to repatriate freed slaves to Africa, and fuels the current deportation of “illegal” immigrants and use of state terror to achieve it. Separating and incarcerating families as a tool of control, exclusion and domination—what is now playing out on the U.S. southern border—was also used against slaves, Native Americans and Japanese Americans, and fits the standard definition of state-sponsored terrorism. Steve Schmidt, a renowned “Never-Trump” strategist, has resigned from the Republican Party, citing the troubling historical parallels. Anti-immigrant animus exemplifies the desire by western society to have it both ways: We use you when we need you, and discard you when we don’t. We can have our globalization without the demographic shift that we disdain.

Predictably, this self-serving bargain would prove naïve and folly, given the impulse of people to want to better their lives. The view from the street goes like this: If corporations can traverse the globe in search of higher profits, why can’t workers cross borders to better their lives?

Anti-immigrant U.S. political elites and their “aggrieved” white workers have responded by crying foul and demanding strong borders to keep out workers from poorer countries. They ignore the fact that western countries have long created for themselves and their corporate entities favorable terms of participation in the global economy. They did it primarily through conquest (slavery, colonialism), which brought bountiful harvest for them. Writer Vijay Prashad noted that the British literally underwrote the down-payment for the industrial revolution from India though “tribute payments from Bengal and Bihar” that allowed the mills of Manchester and Birmingham to run. They later did it through neoliberal policies that prioritize corporate profits over workers and communities. And their added privilege to afford international travel gives westerners advantage over workers from poorer countries who cannot afford “lawful” international travel with its procedural juggernaut for visas. That’s why they pursue extralegal options.

It must be acknowledged that the dislocation of workers and families is a byproduct of global forces beyond their control. For decades, the interests of entire regions in the Global South were subordinated to the geopolitical imperatives of a Cold War-obsessed superpower and its western allies, with democracy often a casualty. The U.S. government destabilized these regions by backing dictators who immiserated their own people, forcing many to flee to safer countries. The wars that engulfed Nicaragua, Guatemala and El Salvador in the late 1970s and 1980s and the resulting mass exodus and destabilization were a culmination of this interference.

Furthermore, the U.S.-imposed neoliberal Structural Adjustment policy brought harmful deregulation of global markets and privatization schemes that dismantled state assets such as mass transit, weakened trade unions, imposed austerity, exacerbated inequality and sustained unaccountable governments—no matter how ruthless—just as long as they embraced neoliberalism. Many governments in the Global South were subjected to this regime of social and economic deprivation. International lending institutions employed threats of credit denial to enforce compliance, and their client governments in turn used draconian policing to forestall popular revolt. In many places, that meant getting rid of universal healthcare and education programs, often with catastrophic consequences for those facing HIV and other epidemics. These policies alienated people and forced millions to find refuge elsewhere. Who is responsible when the victims of such policies have to migrate to mitigate their suffering?

Furthermore, having dangled the “good life” to these masses through western film and mass media, who would blame them for wanting more? After all, that’s what Europeans and corporations do: continuously find the richest and most profitable lands (like South Africa) to reap fortunes.

The meddling has continued into the 21st century, as dramatized by U.S. efforts to undermine Hugo Chavez in Venezuela and the Obama administration’s support of the 2009 coup d'etat in Honduras. That event continues to destabilize Honduras today, and the proliferation of dangerous gangs cited by refugees is a consequence of this instability. The meddling is most obvious, lethal and disruptive in the endless war-making in the Middle East.

Conquest, extraction and economic exploitation are not the only drivers of population dislocations. Climate change, disproportionately fueled by western consumption, is increasingly implicated. With only 5 percent of the world’s population, the United States produces more than a quarter of implicated greenhouse gases. The UN Intergovernmental Panel on Climate change has warned that by 2050, the there could be as many as 150 million “climate refugees” worldwide. Who is responsible when poor people lose land due to climate change and have to move? It is profoundly cruel for the climate-denying U.S. administration to prevent hordes of “undesirables”—themselves often victims of dislocating forces it unleashes—from entering the country to escape their condition.

One day in the 1950s I woke up to find 250,000 white people in my country which, without my permission, the invaders had renamed “Southern Rhodesia.” Not content, the “settlers” had renamed many of our monuments and historical sites, including our famed “Victoria Falls.” Our uninvited guests comprised a staggering 20 percent of the country’s population. Millions more whites migrated from Europe to South Africa. At their zenith in the 1970s and 1980s, whites in that country numbered 5 million, compared to 25 million Africans. I’m very confident that the hordes of white people who came to southern Africa did not have “papers” permitting them to enter. Their governments in Europe may have sent them, but my ancestors did not invite them. And it is impossible for whites to have reached these levels of migration without the “chain migration” so derided by the American right. So when Americans feel besieged by “illegal immigrants” they would be advised to consider that the 11 million undocumented immigrants in the United States constitute only 3 percent of the population.

But amazingly, amid such pervasive oppression, Africans did not start anti-immigrant movements to expel white people. We did not walk around asking white people to “show me your papers.” We did not call them “illegals,” though in our view their presence was illegitimate, and even allowed them the benign designation of “settler.” In twisted irony, it is the white settlers who imposed a racist regimen of ID requirements on their unwitting black hosts. It is a values difference that despite this despicable behavior, Africans were willing to co-exist with their invaders. I can attest to the fact that I never heard anyone in my family call for the expulsion of white people, even after we gained independence. We just wanted to be treated with dignity and have the right to govern ourselves. Our liberation wars were not about expelling white people, they were about the desire for dignity and self-determination.

It is why I am finding it difficult to understand the ill-treatment of people from Central America, especially the official kidnapping of children to discourage black and brown migration. Westerners need to ask themselves: What would they be without this history of conquest, extraction and economic domination? Where would the United States be without “allies” in the Global South who served as its “bulwark against communism,” often at the expense of their own independent political, economic and civic institutions? Indeed, much of the instability in Africa, Central and South America that has given rise to mass migration can be traced to the missed opportunity to develop these institutions during the 50 years of the Cold War.

This is not necessarily a call for open borders, though there are credible arguments in its favor. Instead, it is an invitation to white Americans to let the history of western colonialism to inform how they treat these desperate immigrants—the least among us.