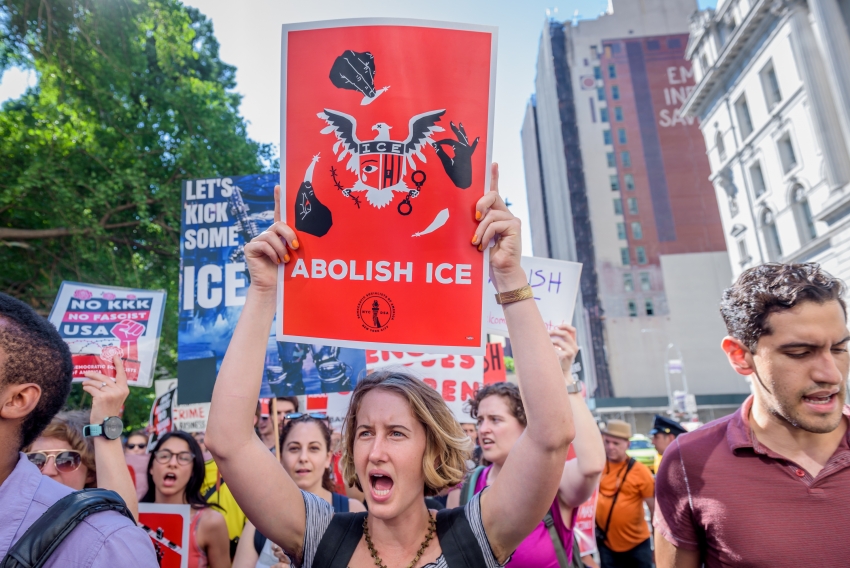 While the call to abolish ICE was absent from official protest descriptions, it was ever-present at the rally. (Erik McGregor/Pacific Press/LightRocket via Getty Images)

As tens of thousands took to the streets this weekend, many marchers joined the growing demand to defund and dismantle ICE.

“The violence that is inherent within this institution cannot be reformed, it cannot be made more human. It must be abolished.”

Chants of “ICE, shut it down; detention centers, shut it down,” echoed across downtown Chicago on Saturday as more than 50,000 protestors took to the streets to demand an end to the Trump administration’s brutal immigration policies, part of a national day of action branded as Families Belong Together that saw rallies in over 700 cities. Scattered throughout the crowd were signs reading, “ICE Crusher” and “Families Against ICE” and some demonstrators distributed actual ice to combat the 100-degree heat index.

While the call to abolish U.S. Immigration and Customs Enforcement (ICE)—the agency largely responsible for separating families and operating child detention centers—was absent from official protest descriptions, it was ever-present at the rally.

ICE, created in 2003 to oversee the detention and deportation of individuals arrested for immigration violations, was the focus of intense criticism from protestors and speakers alike. Several of the organizations involved in coordinating the Chicago rally, including the Latino Policy Forum, Dream Action Coalition and the National Immigrant Justice Center, had previously called for dismantling ICE or diverting funds away from the agency.

“We need wholesale immigration reform to fix our broken immigration system as opposed to an increased punitive policy that increases the reign of terror—and ICE is the leader of creating that fear,” said Sylvia Puente, executive director of Latino Policy Forum, a group that helped organize the march. “We’ve heard from many organizations that we work with that Latinos who are legal permanent residents and some that are citizens are afraid to congregate, they’re afraid to go shopping.”

Protestors voiced similar criticisms of the threat that the agency poses, even to legal residents.

“They’re taking advantage of immigrants who don’t know what’s going on, who are afraid, who as soon as they see an ICE officer are immediately scared,” said Joanna Hernandez, 21, a DACA recipient. She carried a bright pink sign, emblazoned with the words: “Abolish ICE.”

What began as a call from immigrant rights organizations years ago has now become a movement endorsed by potential 2020 presidential contenders and progressive candidates across the country.

Alexandria Ocasio-Cortez, whose June 26 victory in New York’s 14th District congressional primary upset 10-term incumbent Rep. Joe Crowley, campaigned on a promise to abolish ICE. In the past week, Sens. Kirsten Gillibrand and Elizabeth Warren have called for the agency to be replaced while Senator Kamala Harris hedged the issue, suggesting that politicians should “probably” start from scratch on immigration enforcement in an interview with MSNBC.

Despite many marchers’ calls to abolish the agency, however, some community members felt the national day of protest fell short of embracing the change needed to make immigrant communities feel safe.

On Friday, the night before, a smaller march was held in Pilsen, a heavily Latino neighborhood on Chicago’s South Side, that focused primarily on the abolition of ICE.

“In reality, a lot of people from this community want to completely abolish ICE,” said Rosa Esquivel, a member of the Pilsen Alliance Executive Board, explaining that family reunification was not enough in the eyes of community members.

ICE’s 2017 budget surpassed $6 billion and it made a total of 143,470 arrests in the same year. Critics have cited the agency’s role in separating families, aggressive workplace raids and uniform targeting of all immigrants regardless of criminal records as main grievances.

Soon after taking office, President Trump issued an executive order granting ICE officers discretion to arrest all undocumented immigrants, whereas previous policy had prioritized targeting those convicted of serious crimes. As reported by New York Magazine’s Benjamin Hart, ICE’s arrests of undocumented and “noncriminal” immigrants during the 2017 fiscal year rocketed to 37,734, more than double that of 2016.

Other organizing partners for the Pilsen march, which drew over 200 protestors, echoed the need to end ICE activities.

“It’s traumatic to even interact with ICE, it’s traumatic to be detained indefinitely,” said Clara Alcott, Communications Working Group Co-Chair for Chicago Democratic Socialists of America. “We need to continue the conversation until ICE is abolished.”

While growing numbers of progressives have joined in calls to abolish the agency, skeptics also find it unlikely that the movement will gain traction under the Trump administration. In a Fox interview on Saturday, President Trump called ICE agents “much tougher than MS-13” by a “factor of 10,” arguing that abolishing the agency would make the country unsafe.

“Abolishing ICE is not something that either one of the basic parties are going to do,” said John Beacham, a coordinator for Answer Chicago, an antiwar organization. Beacham noted that it was under President Obama that the administration, “changed the policy of ICE and immigration enforcement in this country to an offensive operation.”

At the Saturday march, organizers unfurled an “Abolish ICE” banner behind speaker Irene Romulo, an organizer for Organized Communities Against Deportations, as she addressed the crowd, calling for continued efforts to shutter ICE.

“The violence that is inherent within this institution cannot be reformed, it cannot be made more human,” said Romulo. “It must be abolished.”

Grace Dixon is a summer 2018 In These Times editorial intern.