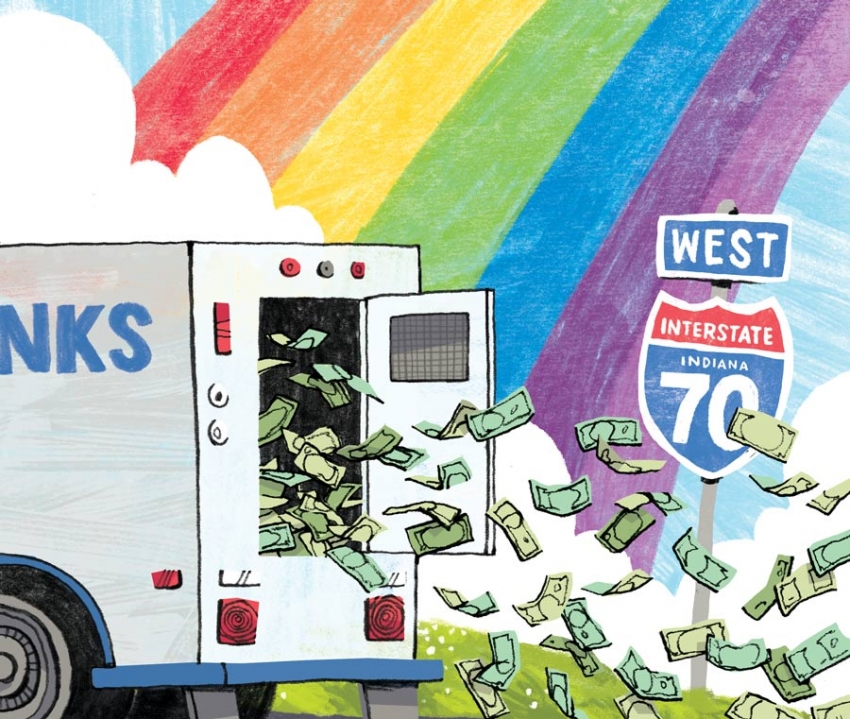 Once upon a time on I-70. (Illustration by Drew Bardana)

Why Dreams of Striking It Rich Are Actually Anti-Capitalist

The quest for buried treasure is a quest to escape the market.

The same sort of magical thinking that goes into the longing for found treasure might also help us challenge the central tenet of Trump’s America—that if you’re not wealthy, it’s your fault.

By all accounts, it was like a scene out of a movie, or maybe a fairy tale. On May 2, the back doors of a Brinks armored truck flew open and $600,000 spilled out onto Interstate 70 in Indianapolis. People stopped their cars in the middle of the road to scoop up the cash. Word spread on social media, and local residents raced to join the fray. As a woman named Jazmyne Danae put it while livestreaming the frenzy on Facebook, “People just came out here, and was gettin’ hella money. … Look at all this money. … This man came and got a bag a money, ya’ll. Look at this. All this money is on the highway.”

Unsurprisingly, national media seized on the incident as a measure of our collective honesty, or lack thereof. The New York Times called it “a moment that instantly tested the core of human morality, the definition of right and wrong.” On ABC’s America This Morning, a sardonic Diane Macedo said, “Legally, finders keepers does not apply here.” She went on to display a screenshot of the following Twitter statement from Indianapolis police: “Anyone who picked up money can be charged with theft.”

But in this, the second year of Donald Trump’s presidency, the incident surely reflects more than America’s failure to pass an ethics exam. Indeed, if that were the case, why bother? The continued national support for Trump in the face of his own penchant for grabbing cash tells us we’ve failed. I would suggest instead that the mad scramble for money on I-70 is a reminder of a persistent American fantasy: that of stumbling suddenly upon a hidden cache of gold or cash. And this isn’t evidence of money worship, or some dream of capitalist orgy. Rather, this is wish fulfillment—the longed-for moment of being freed from the constraints and anxieties of trying to get by in capitalist America.

This theme runs through some of America’s most popular stories. From early buried-treasure tales by Edgar Allan Poe and Washington Irving to recent novels-turned-films such as A Simple Plan (1998) and No Country for Old Men (2007), the story of stumbling upon a cache of money is a veritable genre unto itself. “It’s the American Dream in a goddamn gym bag!” Lou Chambers says of the $4.4 million in $100 bills he and two friends find in A Simple Plan.

The key feature of this genre is that one happens upon the money through serendipity, not thievery; it’s treasure, rather than loot. In countless bank heist films the characters are professional crooks; as the old adage goes, robbing a bank is simply the flipside of owning one. But in the found money genre, the protagonists are economic innocents who exist outside the system. As such, these stories give expression to our collective desire for a relationship to money that isn’t bound up with conventional notions of “success” and “failure” under capitalism. Instead, as the critic Fredric Jameson argues in Ideologies of Theory, Vol. I (1988), the narrative about found money evokes an earlier, pre-capitalist era, one in which fortune and luck, rather than the invisible hand, rule human lives. When Llewelyn Moss finds a suitcase full of drug money in No Country for Old Men, it is akin to Jack’s discovery of the giant’s treasure atop the beanstalk. Jack is no market guru (he sells the family cow for a handful of beans), and Moss, a Vietnam vet and welder, struggles economically. But for each, the discovery of treasure suggests they’ve exited the realm of the market and entered a fantasy space where miraculous, even magical events determine one’s fate.

Moss’ reaction to the money in Cormac McCarthy’s novel is telling: “His whole life was sitting there in front of him. Day after day from dawn till dark until he was dead. All of it cooked down to forty pounds of paper in a satchel.” On the one hand, Moss sees his life’s labor abstract- ed into the pile of money he has discovered. But he has also found the goose that lays the golden eggs, and—much like people on I-70—he grabs at the chance to step out of the workaday flow of modern capitalism.

In Something for Nothing: Luck in America (2003), Jackson Lears discusses the long-standing tensions between two worldviews—one advocating the self-made man who rises through rationality and discipline, and the other championing the gambler and confidence man who embraces the vagaries of fortune. As he puts it, “Longings for a lucky strike have been counterbalanced by a secular Protestant Ethic that has questioned the very existence of luck.” In America, he says, the standard attitude is that “you make your own luck.”

But what if we step outside this relentlessly ungenerous ideology, and admit that we are all subjects under the invisible hand? Lears suggests that the same sort of magical thinking that goes into the longing for found treasure (and that motivates our identification with characters such as Moss) might also help us acknowledge the role of fortune and accident in our lives, and help challenge the central tenet of Trump’s America—that if you’re not wealthy, it’s your fault. Instead, we might admit that both wealth and poverty are more closely linked to luck than to character.

One might say those seeking a windfall on I-70 stepped into a fairy tale. Of course, that world was sealed off almost immediately. The police made sure of that, after which media commentators like Diane Macedo sought to discredit anyone not hewing to the Protestant ethic of market advancement. The unspoken logic here, of course, is that only the rich can be lucky.

Still, for a brief few minutes in early May, there really were people on the highway grabbing handfuls of loose cash. May they live happily ever after.

David Anthony is a professor of English at Southern Illinois University Carbondale. He has written about money and capitalism in various venues, including Paper Money Men (Ohio State University Press) and Something for Nothing: A Novel (Algonquin Books).