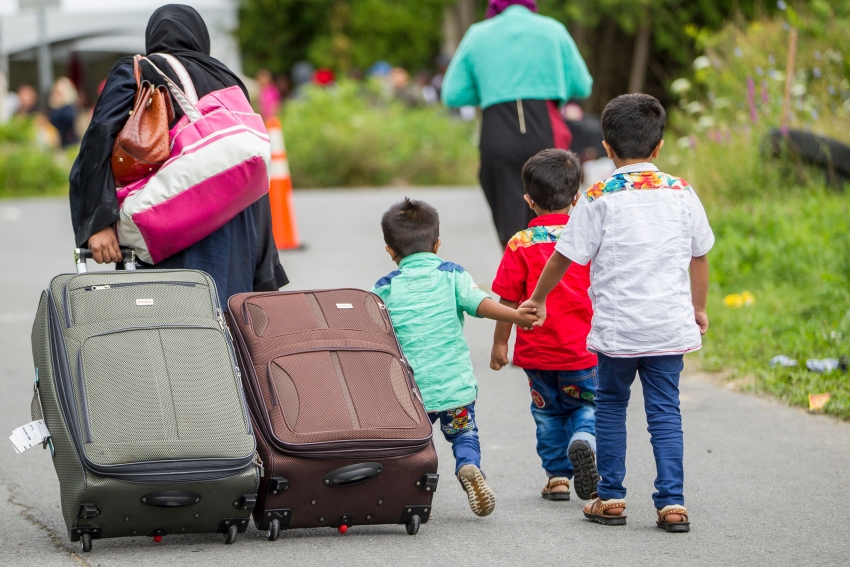 Given What the U.S. Has Done to the World, It Should Be Letting All Refugees In

The U.S. is slamming the door on people forcibly displaced by American interventions.

As with Central America, the United States is committing crimes in Yemen that force millions into desperate circumstances.

People across the United States and around the world have been rightly outraged by U.S. federal agencies’ detention of migrants and separation of their families at the U.S.-Mexico border. Shortly after, the Supreme Court's ruled to uphold the Trump administration’s racist travel ban on several Muslim-majority countries, reviving another fierce reaction to the administration's policy toward immigrants, travelers and asylum seekers.

In middle school, children in the United States learn that the three branches of the federal government are arranged with a system of “checks and balances,” so that no one branch oversteps its power and violates the rights of individuals. But now, the whole world can see that the only thing “checked” by the White House and the Supreme Court is the human right to freedom of movement.

The cases are united by more than one administration's xenophobia. Much of Latin America and the Muslim world share a legacy of U.S. interventions driving the very migration now being cruelly restricted.

Latinx migrants at the southern border have been in the national spotlight. But too rarely has the question been asked: What situation would compel so many people to leave their homes and take the perilous journey north in the first place?

While the Trump administration talks incessantly about its favorite villain, the gang MS-13, it says nothing about the origins of the gang. MS-13 was actually incubated on the streets and in the prisons of Southern California, where so many Salvadoran migrants were incarcerated in the 1990s. Washington's deportation of former prisoners — among other Salvadorans — back to El Salvador was the context for the development of the MS-13.

The Salvadoran community that developed in the United States in the 1980s and 1990s itself emerged as Salvadorans fled a nightmarish civil war. The United States was deeply involved in that conflict, arming and supporting the Salvadoran government and right-wing paramilitary forces throughout Central America.

These death squads committed acts of unspeakable violence that still reverberate throughout the region today. Similar patterns have played out in Guatemala and Honduras, which are also countries of origin for refugees where the United States has a legacy of backing right-wing leaders past and present.

On the other side of the world is Yemen, one of the seven countries whose people are targeted by the travel ban — and the site of a catastrophic U.S.-backed war. We may not hear the cries of Yemeni children the way we heard those of children detained at the border. But many of them are also separated from their families here in the United States because of the travel ban.

As with Central America, the United States is committing crimes in Yemen that force millions into desperate circumstances.

According to the United Nations, the worst humanitarian crisis in the world today exists in Yemen — a striking distinction, given that there's no shortage of other disasters around the globe. There is a civil war in Yemen, in which combatants on both sides have taken actions that have had severe consequences for civilians. But the overwhelming responsibility for the destruction lies with a coalition led by Saudi Arabia and the United Arab Emirates, which has bombed Yemen mercilessly in support of the Saudi-friendly Abdrabbuh Mansour Hadi, whom the Gulf States seek to install as the president.

Their campaign has targeted civilian infrastructure, weddings, funerals and even medical facilities. As a result, tens of thousands have been killed and millions have been displaced. Millions face starvation as well as sickness and death from entirely preventable diseases like cholera. According to UNICEF, 11 million children, or “nearly every child in Yemen,” is in need of humanitarian assistance.

A dropped bomb or exploded missile leaves so much in its wake. But there is a particular and peculiar remnant of the blasts that have wounded Yemen. Yemenis find, again and again, labels on bomb fragments that indicate they are made and sold by the United States.

Indeed, last summer, Trump negotiated with Saudi Arabia to sell the kingdom $110 billion in weapons. The United States also approved $2 billion in arms sales to the U.A.E. last year. The United States is also supplying intelligence to the Saudi/Emirati coalition, as well as mid-air refueling for coalition aircraft.

The United States, therefore, is doing everything but dropping the bombs itself. But even that distinction dissolves when one remembers that the United States did bomb Yemen repeatedly using drone strikes and cruise missile attacks throughout the Obama administration.

The United States has bombed Yemenis. It is supplying the weapons for other countries to bomb Yemenis now. And, as it's doing toward Central Americans in the most callous way, it is denying Yemenis the right to enter the United States.

The beginning of accountability for those actions is letting these — and all — refugees in. But that cannot be the end. Let this time of anguish and outrage be one of a deep reckoning — with what the United States does at its borders, within them, and beyond them.

This article was produced in collaboration with Foreign Policy In Focus.

Khury Peterson-Smith is the Michael Ratner Middle East Fellow at the Institute for Policy Studies.