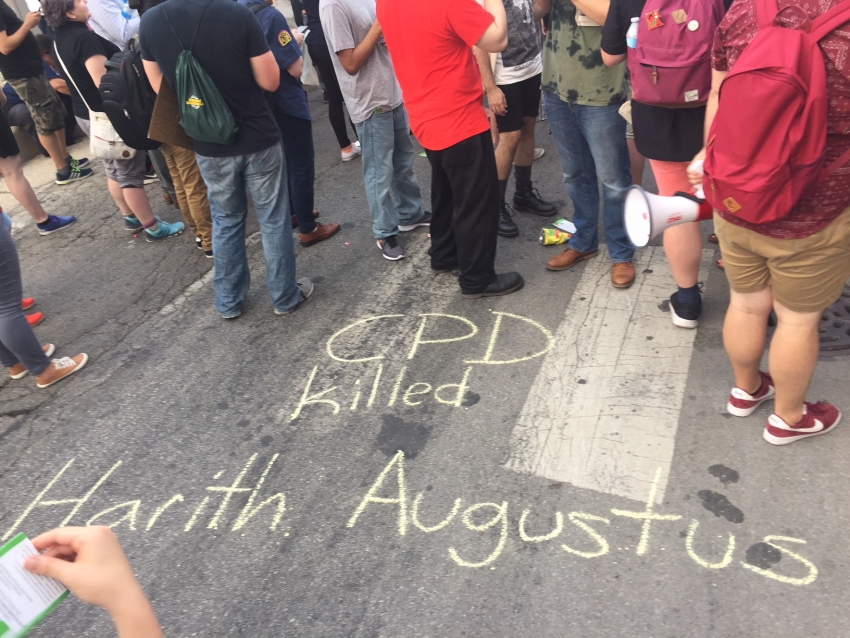 The murder of Harith “Snoop” Augustus by Chicago police is the latest reminder that we must hold our elected officials accountable for upholding a system that devalues Black life.

Chicago Mayor Rahm Emanuel has exhibited a profound indifference to the living conditions in poor, Black communities, but so have many aldermen who have been elected year after year and promote constituent services like speed bumps, but fail to deliver on jobs, healthcare, equitable education and police accountability—which their constituents also desperately need.

In November 2015, the video of Laquan McDonald’s murder at the hands of Chicago police was released, sparking weeks of protests across the city. In the three years since, life for most Black Chicagoans has either largely remained the same or shifted in a bizarre de-evolution of freedom.

Donald Trump is president, Jeff Sessions is Attorney General and the national government is taking major steps backward on police reform. Black folks are facing new threats to their freedoms while the Democratic Party appears unable to learn the lessons from its failures and the Republicans have refined their agendas to include more overt oppression. Meanwhile, the police keep killing Black people with no accountability. Our world is different, and organizers and activists are left to redefine the measures of “progress.”

While we were waiting for justice, Harith “Snoop” Augustus was killed in my neighborhood of South Shore, just around the corner from where I live. The police quickly released official body cam footage apparently showing Augustus carrying a gun, but the footage lacked audio, so the general public is still left without answers. There were community members on the block that day, some of whom saw the shooting happen. I do not know what happened in the moments leading up to Harith’s murder, but I do know that selling loose cigarettes is not a capital offense, and having a concealed, registered weapon is not a crime in Illinois.

I believe that the instigating factor of this murder is a militarized police force that has criminalized Blackness and poverty. Black people have every right to be afraid and outraged. Those activists and community members were enraged and took to heart the oft heard battle cry of progressives: “no justice, no peace.” We can call for peace, but until elected officials actual deliver justice, no one should be surprised at escalating expressions of community heartbreak and anger.

The myriad issues facing Black communities are mounting, and so is the opposition to “politics as usual.” In the years since 2015, demands among Chicagoans for a Civilian Police Accountability Council (or CPAC) are ringing louder and more clearly than ever. The police have to be accountable to the public that they claim to protect and serve because it is the public, in particular the public in low-income communities of color, who have real-time experience and fear of police brutality and harassment.

The entire system of policing needs be re-evaluated, and we are seeing that demands for police abolition from groups like the Black Youth Project 100 are gaining steam on the local and national levels. Groups like the Coalition for Police Contract Accountability (CPCA) have analyzed the Chicago Police Department’s union contract and have identified 14 provisions that make it easy to hide police misconduct and that stand as barriers to long-term police accountability interventions.

Youth-centered organizations like Assata’s Daughters have led the fight to interrupt continued financing of poor policing with their demand for #NoCopAcademy, recognizing that the $95 million the city has proposed for a new police training facility would be better spent on schools and community services. The independent political organization United Working Families, having recently challenged the political machine and won with candidates like Brandon Johnson and Delia Ramirez, are moving forward to redefine progressive politics as a powerful counterweight to the two-party system.

Community organizations have mobilized and activists have put their bodies on the line to fight for justice. But many in City Hall have remained silent or oppositional to their constituents’ demands. Simply negotiating with elected officials who have served multiple terms without delivering justice is not enough.

I'm at a loss for words at where we go from here. I am disappointed by how many progressives (myself regretfully included) resort to the same tired tactics of protesting, marching, winning a small concession and then rinsing and repeating the same process without being intentional about having an electoral representation of our values. There have to be political consequences for inaction of elected decision-makers. I understand that change takes time, and I understand that change happens when we work together, but what will it take to manifest the deep transformation that our dying communities need? I’m working on taking the plank out of my own eye, and in this moment, I am chastened by the wisdom of activists and community leaders who are on the front lines to challenge convention and corruption.

We must be ready to accept that though peace will come at a cost, but not a cost as high as more bloodshed. Many politicians brag about being “tough on crime” but then refuse to prioritize the policies that are proven to actually reduce crime. Locking people up does not make me feel safer, and as a Black woman, more police don’t make me feel safer either. We need to collectively reimagine our safety by deconstructing what “safe” neighborhoods have and making sure all neighborhoods have the same things.

Mayor Rahm Emanuel’s neighborhood is considered “safe,” and it’s because most of his neighbors already have everything that they need to survive and thrive. I would feel safer if all my neighbors had living wage jobs, robust education, quality healthcare and access to legal weed. We are safer when we actually take care of people’s needs instead of criminalizing poverty, Blackness and poor education. If we want to stop crime and preserve life, we need to fix the problems that cause “crime” in the first place.

Mayor Emanuel has exhibited a profound indifference to the living conditions in poor, Black communities, but so have many aldermen who have been elected year after year and promote constituent services like speed bumps, but fail to deliver on jobs, healthcare, equitable education and police accountability—which their constituents also desperately need.

My dear comrade Richard Wallace, Executive Director of EAT (Equity and Transformation), recently stated that “There can be no celebration without affirmation and accountability by our elected officials of the trauma they have caused the Black community in Chicago and a legitimate framework of how to establish Racial Equity in [this city].”

Tanya Watkins, co-executive Director of the Blackroots Alliance, said at a press conference this week that, “ there is no reason that Rahm Emanuel should get to sit in his ivory tower, unscathed and unbothered in this moment. His neighbors, friends, colleagues and community members cannot turn a blind eye to the injustice that is taking place in communities of color.”

We need to work together to flip the script and turn the volume up to 11. We need civilian accountability of the police now. We need to organize our votes, our direct actions, and put in place a long-term strategy to deliver political consequences for any elected official who fails to deliver justice.

We need to act now, because the cost of waiting for peace is too high.