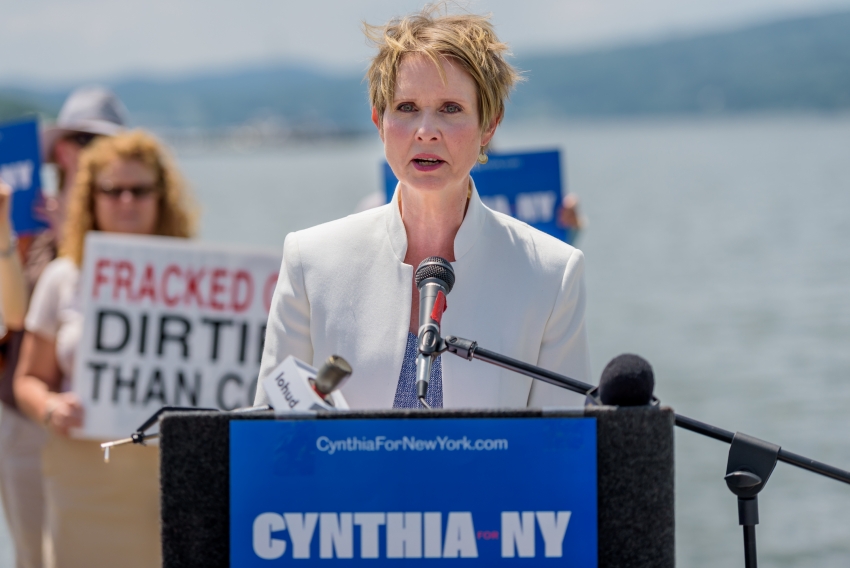 After a lengthy debate, NYC-DSA voted to endorse both Cynthia Nixon and Jumaane Williams. (Erik McGregor/Pacific Press/LightRocket via Getty Images)

Mainstream outlets can’t stop writing about how the NYC DSA’s endorsement of Cynthia Nixon was a model of democracy in action, unlike the Democratic Party.

In mainstream coverage of DSA’s gubernatorial endorsement process, there seems to be as much fascination about the organization’s democracy as with its commitment to socialism.

Since when did the internal debates within a socialist organization become national news?

Over the past month, outlets ranging from Politico to the Huffington Post have been assiduously tracking what they see as a key endorsement in the New York governor’s race: that of the Democratic Socialists of America (DSA). Accordingly, on Sunday, mainstream outlets were on deck to cover the announcement that the New York City chapter of DSA—following a lengthy debate—decided to officially endorse Cynthia Nixon for New York governor, along with Jumaane Williams, a community organizer, progressive City Council member and candidate for Lieutenant Governor.

Incumbent Gov. Andrew Cuomo did not seek the group’s endorsement, nor did his Lieutenant Governor Kathy Hochul.

Asked why her team was eager to receive DSA’s backing, Nixon spokesperson Lauren Hitt tells In These Times that, “Cynthia appreciates and admires the work that DSA has been doing in New York and across the country to create a real volunteer army capable of lifting up critical issues like single-payer and rent control—and then doing the hard work of organizing to elect candidates who champion those issues.”

In a statement, Nixon says, “DSA knows that politics happens at the grassroots level and have shown they are ready to do the work. From being instrumental in Alexandria Ocasio-Cortez's victory to campaigning for universal rent control and single-payer health care, DSA is building a movement from the bottom up. That's why I'm proud to receive this endorsement and look forward to working with DSA's members to knock on doors and organize to defeat Andrew Cuomo and his Wall Street-backed agenda on September 13.”

The rush of attention has been a change of pace for an organization that—now 47,000 members strong—counted just 6,000 people among its ranks in 2015, and whose organizing work has happened in relative obscurity. Following last month’s shocking primary victory of DSA member and DSA-endorsed Congressional candidate Alexandria Ocasio-Cortez, political reporters around the state and the country have come to see the three-decade old socialist group as an electoral force to be reckoned with. In a piece titled “Socialists Divided Over Cynthia Nixon,” Politico’s Albany Bureau Chief Jimmy Vielkland detailed internal divisions when Nixon went before the citywide membership earlier this month, and briefly described the group’s “established endorsement process.”

So what did that process look like? After filling out a lengthy questionnaire—compiling questions from several NYC-DSA working groups—Nixon spoke to around 150 DSA members from across the city and answered their questions, after which an in-room straw poll was conducted where she garnered about one-third support—one-third were undecided and another third opposed.

NYC-DSA also sent out an online poll to all of its members, which showed more than 70 percent support for Nixon. From there, each of the six branches within the larger New York City chapter debated amongst themselves over the endorsement and voted individually. Then, NYC-DSA’s 35-member Central Leadership Council (CLC)—comprised of representatives from each of the six geographic branches, the citywide Labor Branch and the Young Democratic Socialists of America, along with citywide elected officers—voted to endorse Nixon, with around a two-thirds majority. The CLC voted unanimously to endorse Williams.

In mainstream coverage of DSA’s gubernatorial endorsement process, there seems to be as much fascination about the organization’s democracy as with its commitment to socialism. “I think people are really interested and curious about what it means to be a democratic organization, to have these values and a strategy,” Abdullah Younus, co-chair of NYC-DSA, says. “This process has been really eye-opening for people.”

The debate was heated among NYC-DSA’s membership, with lengthy discussions taking place both online and in person. Annie Shields, also a member of the CLC, voted against endorsing Nixon out of concern for how much impact the city’s chapter could actually have on the outcome of the statewide race, among other reasons. Her Bronx-Upper Manhattan branch voted against the endorsement two-to-one. And as a representative to the citywide leadership body, she says, “I felt I had a mandate to vote no.”

Still, Shields feels happy with the way the process unfolded. “Even when you don’t agree necessarily with the outcome, what’s most important to me is that we have a democratic process,” she says.

Younus emphasizes that the endorsement is much more than “just a rubber stamp of approval,” explaining that the chapter sees it as “a commitment to a partnership with a candidate to build working class power in New York State.”

“Electoral campaigning is just a part of our broader strategy to build socialist power and win socialist policies in New York,” he says. “Our work and momentum in this campaign is going to carry us well beyond the primaries in September.”

Younus says NYC-DSA plans to “hit the ground running” for Nixon in the North Brooklyn district of State Senate candidate and DSA member Julia Salazar, who the group had already voted to back. Nixon and Salazar also recently welcomed one another’s endorsements in a joint press conference. “Broadly,” Younus says, “we’re ready to mobilize our significant volunteer base to knock on doors, make phone calls and fundraise for these candidates, because this slate represents the best possible chance to win policies that benefit working people in New York.”

In addition to providing a heightened platform for democratic socialism statewide and at the national level, the phone-banking, door knocking and fundraising DSA members engage in through campaigns help equip them with skills that can boost other grassroots work. DSA members are involved in campaigns on a range of issues, from Medicare for All and immigration to affordable housing and climate justice. Much of that work doesn’t directly engage with electoral politics, and Shields estimates that efforts to support candidates makes up roughly “20 to 30 percent of the stuff that’s going on in any given day” throughout NYC-DSA.

There might be other upsides to the NYC-DSA’s approach to electoral politics. Shields added that mainstream attention to the organization’s endorsement process “shows that the potential authoritarian notions people might have about what socialism is are actually not accurate when it comes to what we’re doing. The way we practice our politics is quite the opposite.”

She contrasted the DSA’s approach to how endorsements take place within the Democratic Party: “The party endorsed Cuomo and I’m not sure what that process looked like, but I don’t think it was as grassroots as ours.”