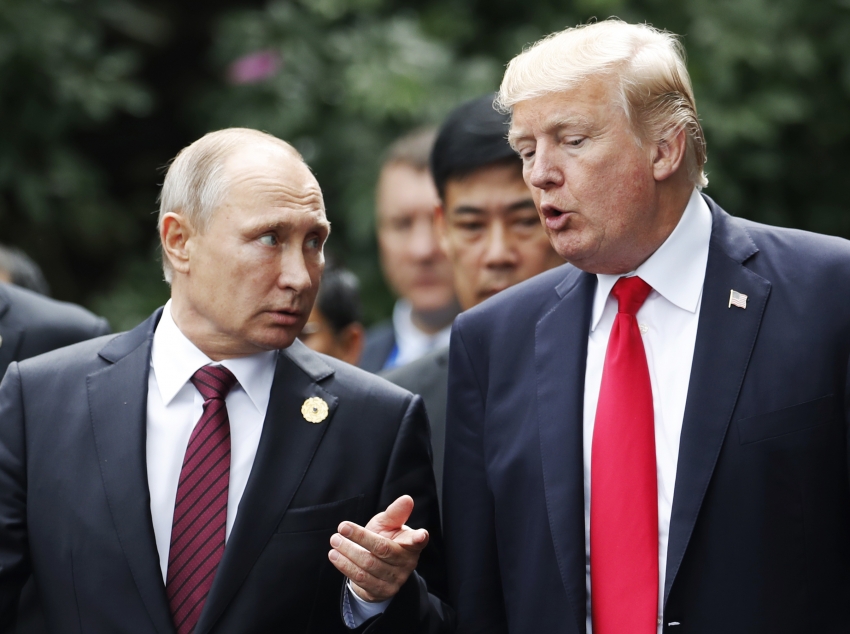 Could it be that reporters like Chait, who are obsessed with finding the next Watergate and tend to err on the side of military intervention, aren’t exercising enough skepticism?

“Why are so many leftists skeptical of the Russia investigation?” wondered New York Magazine’s Jonathan Chait on July 29. It’s a reasonable question, and one with a pretty interesting answer — an answer, unfortunately, that Chait seems unwilling to confront.

According to Chait, left-wing critics of the murky Trump-Russia scandal “consider the issue to be overblown, a distraction at best, and the seeds of a dangerous backlash at worst” — which is accurate. But Chait ties this skepticism to an alleged favorability toward Trump’s “realpolitik alliance with Russia,” rooted in a supposed left-wing hostility to “American sovereignty,” as well as in “frustration with the way the Russia investigation cuts across the electorate … in a way that frustrates their ideological project.” Chait believes, among other things, that the Left is foolish to underestimate “the potential vulnerability the Mueller probe has opened up for the administration.”

This is all nonsense.

There’s little evidence Russia and the probe are a vulnerability to Trump, given relative voter apathy toward the subject, something many on the Left have been saying for a while now. Even Democrats outside of Washington, D.C. say so. A recent Gallup poll found less than 0.5 percent of Americans think the “situation with Russia” is the United States’ most pressing issue.

But Chait’s case here is also weak for the same reason that hamstrings all such think pieces: a refusal to deal with the most compelling case for skepticism.

Take the cyber-disinformation “attack” on the United States. The reason many on the Left don’t take it seriously is because, well, it can be hard to do so. A recent study found that fake news, which made up a pitiful 0.1 percent of Facebook’s daily ad revenue, was a small part of people’s news consumption and was mostly reaching “intense partisans.” An earlier study found that few Americans used social media as their primary news resource during the election, relying far more on cable television. The Facebook ads that were supposedly to blame for Clinton’s loss not only got laughably small engagement, but many—if not most—broadcast progressive messages.

Meanwhile, Chait — who recently speculated that Trump may be a Manchurian candidate 20 years in the making — and others simply ignore the case made by figures like Noam Chomsky, Corey Robin and others: Far from a “realpolitik alliance,” Trump has been significantly more aggressive toward Russia in practice than other presidents, a case supported by such fringe leftists as a former state department official and a fellow at the NATO-financed Atlantic Council. Critics also point to independent (and anti-Putin) Russian journalists and activists, who have been highly critical of Western reporting on the scandal, finding it overheated, flawed and sometimes laughable. They also point to a media climate that has permitted all manner of errors, so long as accusations and conspiracies involve Russia.

Meanwhile, many on the Left have been clear about the dangers of an outsized focus on Russia’s actions in 2016. They’ve warned that it risks reviving a neo-McCarthyite atmosphere that will quickly backfire on the liberal-left. The myopic focus is rehabilitating the public standing of war-hungry neoconservatives and scandal-ridden architects of the government’s ever-expanding national security state. It casts deeply rooted homegrown problems as something simply imposed by an evil foreign hand. It feeds a dangerous post 9/11 chauvinism that treats dissent as disloyalty. And it serves as an obstacle to peace and fuel for militarization, including a startling nuclear arms race that has continued apace under Trump. Helped in part by fear mongering over Russia, the Pentagon is now getting a massive budget, with an extra $6.5 billion devoted specifically to deterring Russia in Europe. The increase since last year alone is more than Russia’s entire military budget.

These critics have also warned that an obsession with what Russia did flattens context. Turning Russia and Putin into a one-dimensional, uniquely aggressive evil risks repeating the mistakes of the early Cold War, and conceals debate about how Western actions have brought us to this mess. This obsession allows the Five Eyes governments to deflect the previously growing public attention on their own spying and cyber activities. It scapegoats Russia while leaving untouched the far more extensive, influential and open influence operations in the United States conducted by Saudi Arabia and Israel. And all of this serves the interests of traditional centers of power, which have been pushing for conflict with Russia for years, but would prefer the U.S. government keep its own foreign meddling capabilities unchecked and forgotten.

You’d be hard-pressed to find a left-wing critic who doesn’t find the U.S. vulnerability to cyber-attack concerning. But their solutions tend to hinge on beefing up U.S. cybersecurity, or reviving the international treaty on internet security that Russia and others put forward back in 2009, only for the U.S. and Europe to refuse.

Here’s a different question one could ask: Could it be that reporters like Chait, who are obsessed with finding the next Watergate and tend to err on the side of military intervention, aren’t exercising enough skepticism?

Chait, like many other pundits, has been caught up in nationalistic, pro-war fervor before. After September 11, he urged Democrats to “maintain their unity behind the war on terrorism and give Bush all the funding for it he needs.” He accused the Left of “looking for reasons” to oppose the Afghanistan invasion, and argued that “humanitarianism … requires more American fighting, not less.” In a now-infamous 2002 column, he argued that “Saddam has provided strong evidence that he will not allow anything to deter him from pursuing weapons of mass destruction,” that a war against him would deter future dictators, and that alternatives to military action in Iraq had “failed for more than a decade.” He asserted that it’s “difficult to imagine that deposing Saddam will not greatly improve the living conditions and human rights of the Iraqi people,” and as late as May 2003, mocked the idea that Saddam had no WMDs, even arguing that their absence “proves that inspections could never have worked.” Chait was, of course, disastrously wrong.

Chait’s catastrophic misjudgement and subsequent events in Iraq didn’t appear to prompt any soul searching. Three years into the invasion, Chait argued that Bush simply “mismanaged” the war. Five years after that, he backed NATO intervention in Libya, with similarly disastrous consequences.

Yet Chait and others continue to cast skepticism and caution as somehow extreme, and prudence as suspect. Maybe instead of asking why many on the Left are so skeptical toward the Russia scandal, it’s time for writers like Chait to ask themselves why they’re not.