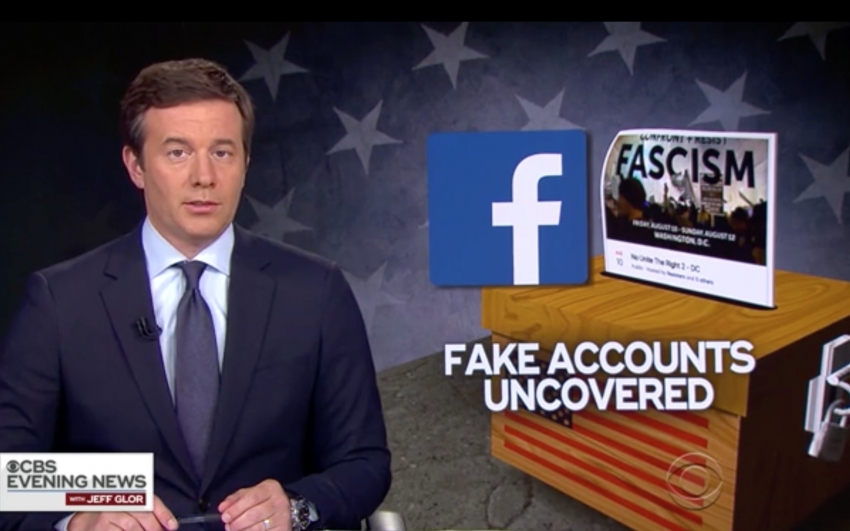 An anti-fascist coalition says its event page was unfairly targeted in the tech giant’s latest crackdown.

This is not the first time left organizations have been targeted—with little media scrutiny—by corporate efforts to weed out “illegitimate” actors.

Facebook announced July 31 that, in a bid to stave off Russian influence in U.S. elections, the company had unilaterally “removed 32 Pages and accounts from Facebook and Instagram because they were involved in coordinated inauthentic behavior.” Yet at least one U.S.-based activist coalition says it was targeted, raising questions about the intent and execution of this new policy.

But instead of interrogating the latest move from the $170-billion-dollar company—arguably the largest and most powerful media organization that has ever existed—press outlets dutifully ran with Facebook’s claims, churning out headlines warning that U.S. voters are being targeted and amplifying the company’s insinuation that Russia is “probably” involved. As a result, Facebook is almost entirely able to control the narrative about its own self-regulation, as it continues to dodge meaningful external oversight and—most troublingly—privately determine the parameters of acceptable political speech.

A Washington, D.C.-based anti-fascist coalition says it was collateral damage of this new initiative.

The company did not definitively link the campaign to Russia. But Facebook officials said some of the tools and techniques used by the accounts were similar to those used by the Internet Research Agency, the Kremlin-linked group that was at the center of an indictment this year alleging interference in the 2016 presidential election.

The “newspaper of record” was not alone. The Washington Post story that ran July 31 regurgitated the company’s framing, with the headline, “Facebook says it has uncovered a coordinated disinformation operation ahead of the 2018 midterm elections.” And a July 31 Vox article leaves the reader all but certain of Russia’s involvement: “Facebook isn’t sure if it’s Russia, but it looks a lot like what Russia did in 2016.”

Mother Jones took a similar approach, warning on July 31, “With just over three months until the vital midterm elections, company officials suspect possible Russian involvement.” That article provided Nathaniel Gleicher, Facebook’s head of cybersecurity policy, an uncritical platform to suggest that the company needs to prepare for war. “We face determined, well-funded adversaries who will never give up and are constantly changing tactics,” he is quoted as saying. “It’s an arms race and we need to constantly improve too.”

Each of these articles names groups allegedly under this ill-defined foreign influence—again, without providing evidence or specifics. The New York Times writes:

Facebook said it had discovered coordinated activity around issues like a sequel to last year’s deadly “Unite the Right” white supremacist rally in Charlottesville, Va. Activity was also detected around #AbolishICE, a left-wing campaign on social media that seeks to end the Immigration and Customs Enforcement agency.

Without even requiring the company to definite its own terms, including the oft-parrotted “coordinated inauthentic behavior,” the press is creating a cloud of suspicion around the legitimate movement to abolish ICE, just as it’s breaking into the mainstream and influencing the national conversation.

Anti-fascist organizers in Washington, D.C., say they were caught in the crosshairs. One event targeted by Facebook’s new policy was “No Unite the Right 2,” a protest against the successor to last year’s deadly white-supremacist brawl in Charlottesville. Facebook acknowledged this removal stemmed from its targeting of the “Resisters” Page, which the company claims “also created a Facebook Event for a protest on August 10 to 12 and enlisted support from real people.”

The Event – “No Unite the Right 2 – DC” – was scheduled to protest an August “Unite the Right” event in Washington. Inauthentic admins of the “Resisters” Page connected with admins from five legitimate Pages to co-host the event. These legitimate Pages unwittingly helped build interest in “No Unite Right 2 – DC” and posted information about transportation, materials, and locations so people could get to the protests.

However, the anti-fascist coalition Shut It Down DC argued in a statement it was unfairly targeted by this action:

We have been meeting for weeks. We took over the Facebook event created by outside groups, in a desire to keep it accountable to local organizers. At numerous points, national groups have organized events in DC, and often demanded the resources of local organizers.

The event was created by Resisters, but was used for legitimate protest organizing and promotion. Specifically, local organizers put our own messaging, graphics, and videos in it. We did not promote anyone’s views except our own.

“It's an absurd moment, where we're trying to figure out how to make Facebook a safer environment, the first people they go after are anti-fascist protesters,” says Dylan Petrohilos, a former J20 defendant and Washington, D.C.-based anti-fascist organizer.

Petrohilos is particularly concerned that the company claims one of its criteria for deeming accounts suspicious was their use of virtual private networks (VPNs), which are commonly used by activists as alternatives to public networks to enhance online security and dodge surveillance. “I use a VPN every day on my cell phone and computer, and that’s because in our political movements, we have mass surveillance and mass data knowing everything about us,” he tells In These Times.

Petrohilos adds that Facebook did not consult with local activists before removing the accounts.

The anti-fascist coalition says the shutdown is so disturbing precisely because the specter of foreign influence was used to undermine efforts targeting the homegrown problem of white supremacy. The coalition states:

White nationalism and supremacy is not a Russian ploy, it's a systemic problem. Jason Kessler [who organized the “Unite the Right 2” rally] is not a Russian bot, he's the foot soldier of the Trump agenda. White supremacy did not start with the election of Trump, and it won't end when Democrats are elected to the U.S. Congress. It started when Columbus arrived in 1492 and robbed, murdered, and raped First Nation peoples, it continued with the chattel slave trade, Segregation and Jim Crow, the Chinese Exclusion Act, Japanese internment camps, and shackled dead black bodies on stolen land.

This is not the first time left organizations have been targeted—with little media scrutiny—by corporate efforts to weed out “illegitimate” actors. As part of a 2017 crusade against “fake news” led by major tech companies, Google modified its algorithms, giving priority to such centrist publications as the Washington Post and New York Times while tanking the search traffic of such sites as Common Dreams and Truthout.

Facebook claims that its decisions are security measures, designed to prevent “abuse” in the wake of concerns over “misinformation” influencing the 2016 U.S. presidential election. But whatever one thinks about Russian influence in the election, press outlets must not surrender all critical faculties simply because a corporate spokesperson insinuates Russia might be involved.

Sarah Lazare is web editor at In These Times. She comes from a background in independent journalism for publications including The Intercept, The Nation, and Tom Dispatch. Julianne Tveten writes about the intersection of the technology industry and socioeconomic issues. Her work has appeared in Current Affairs, The Outline, Motherboard, and Hazlitt, among others.