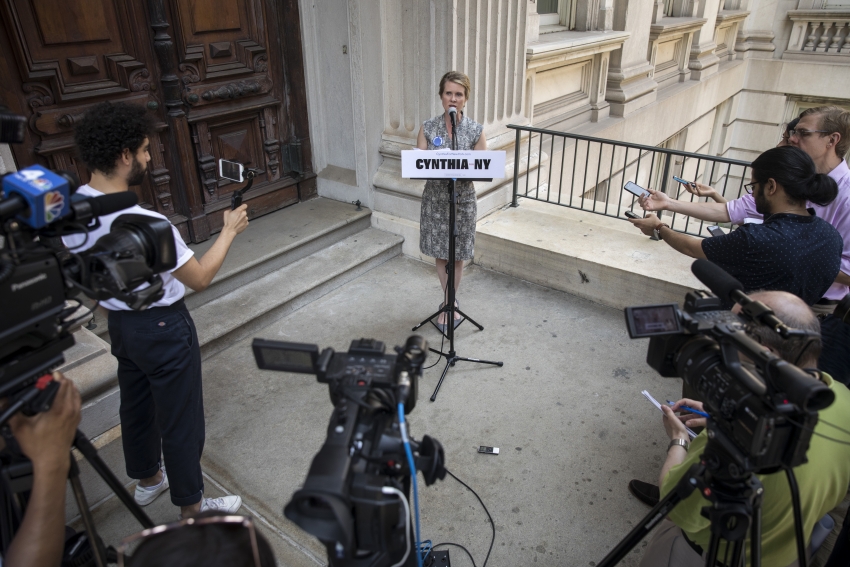 The candidate has a plank to help survivors of domestic violence who are incarcerated for defending themselves.

Nixon, notably, includes a plank to address this social problem, pledging to increase commutations and pardons for domestic violence survivors who commit “crimes” in self defense.

New York Gubernatorial candidate Cynthia Nixon on July 26 unveiled a new platform, #JusticeForAll, to deliver on her campaign promises to stem mass incarceration. The platform calls for an end to: cash bail, the criminalization of marijuana, solitary confinement and the prosecution of children as adults. In her boldest provision, Nixon advocates an expansion of commutations and pardons for survivors of domestic violence who are incarcerated for defending themselves. This is a uniquely feminist measure given that women, especially women of color, are often unable to receive help for domestic violence. Nixon accolades from many activists, but some cautioned that her platform—while far better than that of her opponent, Governor Cuomo—does not go far enough.

Nixon’s plan, which declares that “It’s time for #SchoolsNotJails,” points to the influence of invest/divest strategies reflected in grassroots efforts like the Movement for Black Lives and No Cop Academy. Both campaigns call for money to be funneled away from prisons and policing, and into education, healthcare and other public goods. Nixon has already unveiled several proposals to address the concerns of working-class New Yorkers, including increased investments in affordable housing, education and public transportation. The candidate says her criminal justice platform is intended to decrease state violence against communities that are, in her words, “devastated by a biased and unrelenting justice system.”

In one of the most radical aspects of her platform, Nixon’s parole reforms raise the possibility of extending parole to people who have committed “violent” crimes. This includes permitting the Board of Parole to “evaluate all persons who are over the age of 55 who have served at least 15 years in prison for possible parole release,” even if that person has not completed their minimum sentence. The reforms, targeted at an aging prison population with a very low risk of recidivism, “reflect science and common sense,” Nixon’s chief spokesperson, Lauren Hitt, told In These TImes.

Some argue that, to truly address mass incarceration, it is necessary to advance policies towards rehabilitating—and freeing—people charged with violent crimes. A focus on ending the war on drugs is insufficient, as people charged with drug crimes make up a relatively small segment of the prison population. Activists have long noted that the binary of “violent” vs. “non-violent” charges is itself misrepresentative, as evidenced by the fact that survivors of domestic violence are often criminalized for how they defend themselves, and demonized as “violent offenders.”

Nixon, notably, includes a plank to address this social problem, pledging to increase commutations and pardons for domestic violence survivors who commit “crimes” in self defense. The criminalization of survivors of gender violence is still largely overlooked. Media narratives, as well as policies like former President Barack Obama’s My Brother’s Keeper initiative, overwhelmingly depict the victims of police brutality and mass incarceration as young, black and male. While the #SayHerName movement has drawn more attention to black women killed at the hands of police, the concerns of incarcerated women and LGBTQ people are often not incorporated into mainstream criminal justice reforms.

That is changing, however, thanks to the hard work of organizers from groups like Love and Protect, which, in its own words, “supports those who identify as women and gender non-conforming persons of color who are criminalized or harmed by state and interpersonal violence.” The #FreeThemNY campaign, which is “dedicated to freeing criminalized survivors of gender violence held in prisons in New York,” has also shined a spotlight on the issue, and Nixon’s platform reflects the insights of these activists.

Nixon’s platform also takes aim at reforming the bail system. Abolishing cash bail has been a high priority for criminal justice reform activists and organizations in New York, which see growing wealth inequality and mass incarceration as two troubling sides of the same coin. According to the Brooklyn Community Bail Fund, a New York City-based organization that pays bail for people who can’t afford it, 45,000 people in New York City are incarcerated per year because they cannot afford bail. The inability to afford bail, coupled with a dysfunctional court system, means that many people will plead guilty to avoid spending time in jail awaiting trial — turning poverty itself into a crime.

In January 2018, Governor Andrew Cuomo announced that he would pursue an end to money bail for nonviolent offenders, as well pre-trial reforms, including timely evidence discovery and speedy trial requirements. But Governor Cuomo’s budget bill did not include any of these proposed criminal justice reforms, leaving room for Nixon to challenge him on these issues from the left.

Akeem Browder, the brother of Kalief Browder and an activist who advised Nixon’s campaign on the platform, told In These Times that Cuomo had not fulfilled his promises to fix New York’s profoundly unjust bail and pre-trial system. Browder’s brother Kalief committed suicide after languishing for three years awaiting trial at Rikers Island, in part because he could not afford to pay his $3,000 bail.

In New York, where rampant Wall Street crimes go unpunished and the poor are still subjected to broken windows policing, the injustice of the system is especially stark. Browder told In These Times that his then-teenage brother “spent three years in jail for allegedly stealing a backpack,” while Hollywood producer Harvey Weinstein walked away free from a Manhattan courtroom after paying $1 million in bail on numerous rape and sex-crime charges.

According to some, Nixon’s bail reforms do not go far enough. Rachel Foran, managing director of the Brooklyn Community Bail Fund, says that Nixon’s proposal could be improved by explicitly stating that New York’s cash bail system will not be replaced by risk assessment algorithms. These algorithms, already in wide use in New York City and cities across the country, replace money as the determining factor for gaining freedom with a person’s history of prior convictions.

Critics point out that these metrics reflect and reproduce the racial and socio-economic disparities of the criminal justice system, because poor communities of color are more likely to be overpoliced. “Tools such as these are not solutions to reforming our unjust and broken bail system,” Foran told In These Times in an email. “In fact, they often worsen racial disparities and can increase incarceration rates.”

Another area of Nixon’s platform is likely to catch some criticism from activists. In addition to sending all youth under the age of 18 to family rather than criminal court, Nixon’s proposal closes traditional detention centers (called “secure facilities”) for young people, instead sending them to “non-secure facilities” — small group homes that provide a supportive and less restrictive environment. She plans to funnel the estimated $30.5 million in saved revenue from these closures towards programs that help at-risk youth, including staffing juvenile facilities with experts in trauma-informed care and childhood development. This last provision, however, is certain to be controversial, as many proponents of the divest/invest strategy oppose any funding for carceral facilities, even ones with an explicitly “rehabilitative” mission.

Whatever its shortcomings, the fact that Nixon’s campaign is broadening the Overton window on criminal justice policy is heartening to the activists who’ve chosen to support her. The prospect of a governor who may be responsive to grassroots demands stands in direct contrast to Governor Cuomo’s tenure. The reign of Cuomo — dubbed Governor 1 percent by activists — has been characterized by fiscal conservatism, corruption and personal vindictiveness, in addition to his backpedaling on criminal justice reform. If implemented, Nixon's platform would mark a sharp divergence from the governor, who has been criticized for failing to follow through on his promises to shorten more prison sentences.

For a group like the New York City Democratic Socialists of America (DSA), which voted to endorse Nixon after a period of contentious debate, the stakes are high, and there is a strong sense that Nixon must be accountable to the grassroots organizations that will undoubtedly put in long hours on her campaign. According to DSA Steering Committee member Danya Lagos, Nixon’s plan aligns with demands that organizations like hers have been fighting for for years, like the Campaign to Close Rikers coalition, a 150+ member coalition working to close the notoriously violent and corrupt Rikers Island Jail. The overlap between Nixon’s criminal justice platform and the demands that ground DSA’s organizing speaks to the potential for an alliance between  “electoral and movement politics” in Nixon’s campaign, Lagos told In These Times.

Practically speaking, Nixon needs that alliance as much as anyone. To confront the powerful moneyed interests allied with Governor 1 percent and to win meaningful criminal justice reform, her supporters say she needs a mass movement behind her—and holding her accountable.