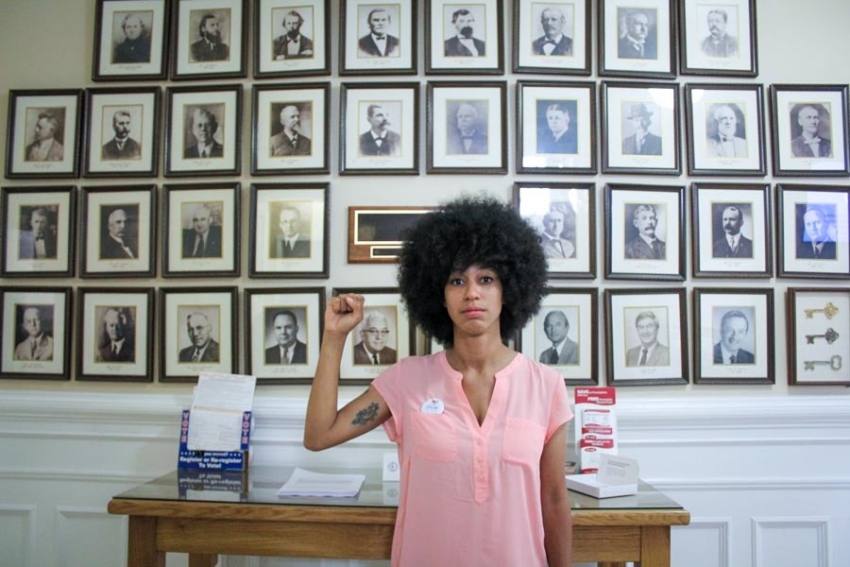 On June 7, after winning by 13 votes, Mariah Parker was sworn in as an Athens, Ga., county commissioner. (Photo courtesy of Mariah Parker campaign)

Meet Mariah Parker, One of the Young, Radical Women of Color Rescuing the Democratic Party

26-year-old Mariah Parker, who won an upset victory for Athens, Georgia, county commissioner, shows how progressive Democrats can bring together the struggles for racial and economic justice.

Parker sees in black Americans’ story a struggle against oppression that is both uniquely their own and one patch in a larger quilt, one made up of tightly knit struggles on behalf of any community that has come under systemic fire.

For Mariah Parker, recently elected county commissioner in Athens, Ga., being sworn into office on The Autobiography of Malcolm X was simply a way of accurately signaling her worldview. It’s a view that’s grounded in a specific vision of what the world could be—one in which people of color, and black people in particular, live free from the grip of racism and economic misery. Of all the volumes in the rich tradition of Black Americans’ quest for such a world, few are as deeply cherished as Malcolm’s towering 20th-century autobiography.

It’s a vision that’s increasingly gaining steam. Progressive and socialist candidates of color, particularly women with the wind of popular movements at their backs, like New York’s Alexandria Ocasio-Cortez, Michigan’s Rashida Tlaib and Minnesota’s Ilhan Omar, are running on precisely these sorts of platforms. And they’re winning.

Photos of Parker’s swearing-in quickly went gangbusters. In widely circulated images, Parker’s afro is piled high and heaven-bound (to borrow a phrase from poet Hanif Abdurraqib), and her right hand clenched in a fist recognized the world over as a sign of one’s commitment to stand alongside the oppressed. Her left hand rests atop the autobiography, a book widely circulated throughout black American communities, and one of the harshest indictments of the country’s long war against them.

Though she had no idea this small act of symbolism would take the internet by storm, it’s hardly surprising that it did. Parker is smack-dab in the middle of two of the Democratic Party’s biggest crises.

First, there’s the widening gap between the priorities of the Democratic Party higher-ups and its popular base. Second, there are the Democratic Party’s awkward struggles to deliver a convincing message for addressing the knotty relationship between racial and economic oppression. The view held from the commanding heights and managerial suites of the party seems to be that, at best, race and class issues must be addressed separately, and at worst, that the two are at flat-out war with one another.

Yet the available evidence suggests black people feel differently. It’s right there in years of survey data, which consistently finds black Americans deeply concerned by both economic issues and the powerful role racism plays in suffocating their chances at a better life. Unsurprisingly, black voters rank among the most economically progressive in the country. It’s also been front and center in the clear-eyed policy platforms of organizations like BYP100 and the Movement for Black Lives. And it was there in Mariah Parker’s campaign for county commissioner.

From Ferguson to Baltimore, and Philadelphia to Chicago, a fresh crop of black movement builders have issued a clear demand: the emancipation of black people from the interwoven harms of racism and poverty. Groups like the Movement for Black Lives and the Black Youth Project have called for reparations on the grounds that this combination has made it easier to exploit and oppress black communities.

After first taking root in the streets, this generations-spanning struggle for racial and economic justice is starting to sweep across campaigns for public office, Parker’s included.

“Racial and economic injustice have been very intertwined historically,” Parker says. “There’s overt forms of violence, like lynching and police brutality, but then there’s quiet forms that are less easy to put your finger on, like the inability to obtain capital to open a business or own a home or the inability to unionize.” Here, Parker is drilling to the core of the black American experience, where both racism and economic exploitation have combined to increase the misery index in black communities, in ways often submerged and thus harder to detect. “Tackling those things at once is so important because they are the hardest things to see from the public perspective,” she says.

The fact that Parker, along with other left-wing candidates of color, such as Ocasio-Cortez, find themselves at this intersection is significant. We rarely hear the voices of those most intensely impacted by policy decision. Women of color, given their very noticeable near-total absence from established media, are the least seen and heard of all.

Parker, who co-founded Athens’ chapter of the progressive Bernie Sanders-aligned Our Revolution, is a 26-year-old rapper, PhD student and openly queer black woman. She ran on a progressive platform that put racial and economic justice center stage, and won by a razor-thin margin of 13 votes. Athens itself is a mostly working-class community with a median income that barely rises above half the state of Georgia’s.

This is even truer for Parker’s district, which the Atlanta Journal-Constitution describes as “an economically struggling swath … that lacks some of the same amenities that other parts of town enjoyed.” On top of the district’s economic woes, it’s also “the most heavily populated black district in Athens,” Parker tells In These Times. She goes on to argue that in a struggling community with a high concentration of black residents, people don’t view racism and poverty as distinct evils with no connection, but rather as twin giants that need to be knocked down simultaneously. In speaking with Parker, it’s clear that many of her waking hours are spent contemplating the two, and that she sees a set of principles in Malcolm’s life and words that might help light the way to a better world.

Parker says that as an officeholder, she hopes to channel Malcolm’s “capacity for being an outspoken agitator that pushed the conversation in a radical direction.” Beyond his sermons of collective black uplift and broader social change, Parker is especially inspired by the fact that “in his later life, he was willing to incorporate new experiences as a means of seeing where the movement needed to go in order for the work to get done.” By this, Parker is pointing toward Malcolm’s personal evolution as a critic of American power. In his earliest days, Malcolm was a fierce but ideologically straightjacketed mouthpiece for the Nation of Islam. That all started to change following his stormy split with the organization. In the months after, which now seem to have always been racing toward his eventual murder, Malcolm became increasingly drawn to the moral force of socialism and expressed a deepening belief in multicultural, working-class organizing as the best weapon for confronting American power. In a May 1964 Q&A hosted by the Militant Labor Forum, he went so far as to say, “It is impossible for a white person to believe in capitalism and not believe in racism. You can’t have capitalism without racism.” And toward the end of his life, he explained that “capitalism needs some blood to suck…and it can only suck the blood of the helpless.” The most helpless in America would always be the communities most menaced by those with power and cheated out of their fair share of it. That condition has defined the black American experience.

Whether he knew it or not, Malcolm was channeling an idea with deep roots in black political life. From small-scale plantation sabotage under slavery to socialist organizing among sharecroppers for workplace democracy in the post-emancipation south, history offers a rich tapestry of black resistance to a world where, as Dr. King once wrote, “the inseparable twin of racial injustice was economic injustice.” A half-century after Malcolm’s assassination, the fight for that better world is still on. And the pathway to it, Parker believes, runs through everyday people recognizing how America’s chart-topping inequality, according to the World Economic Forum, hurts everyone but an elite few. “If we band together to fight against it,” Parker says, “it is to everybody’s benefit.”

Parker sees in black Americans’ story a struggle against oppression that is both uniquely their own and one patch in a larger quilt, one made up of tightly knit struggles on behalf of any community that has come under systemic fire. It’s here that Malcolm’s ability to transform, his ability to stretch his imagination of what’s politically possible when those who have been cast aside band together, echoes loudest. “I do believe that capitalism relies upon social stratification. Be it in terms of ability or gender or sexual orientation or immigration status, it definitely relies upon oppression of a kind,” Parker adds. “In America, that has fallen particularly along racial lines” but it’s important “to build solidarity across different identity groups” to understand that “the system hurts everybody.”