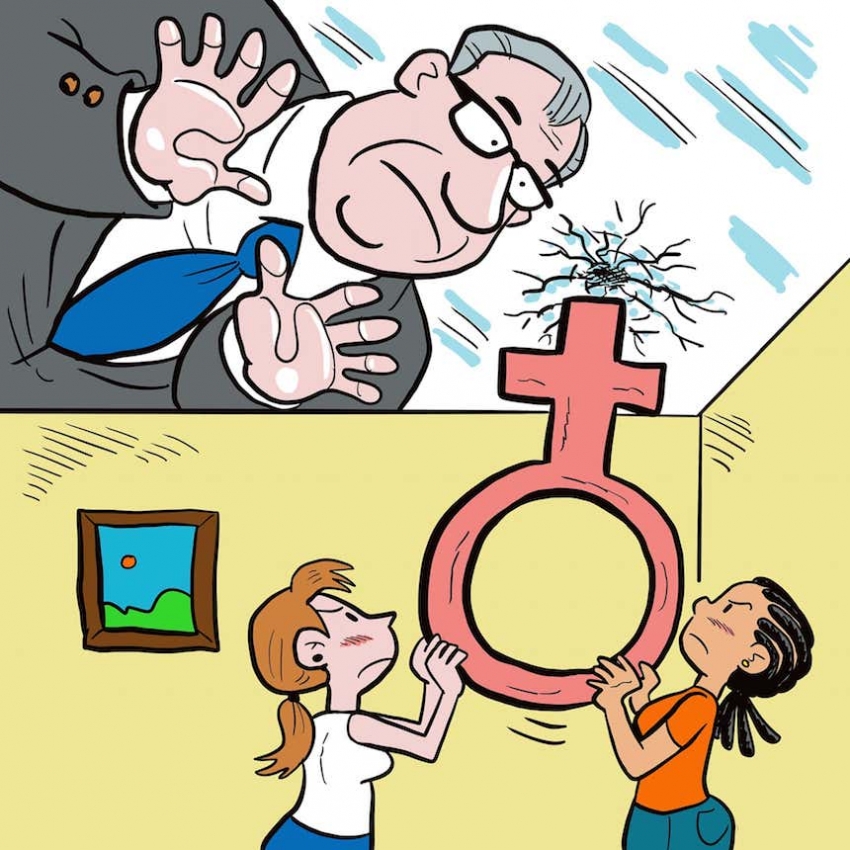 Socialism and Feminism: We Can’t Have One Without the Other

Fighting capitalism and patriarchy at the same time.

1. The principle that we can’t achieve gender equality without overthrowing capitalism—and vice versa

Because economic exploitation and gender oppression are deeply intertwined. The sexist notion that caregiving and domestic labor are “women’s work” is awfully convenient for capitalists: If a woman’s natural role is to care for her children, then who needs paid parental leave or public child care?

As for paid labor, professions dominated by women are assumed to merit lower pay. Take teaching: Once women began entering the historically male-dominated field, pay declined across the board and teachers became a prime target of the Right.

“You are a woman in a capitalist society. You get pissed off: about the job, about the bills, about your husband (or ex), about the kids’ school, the housework, being pretty, not being pretty …” —Barbara Ehrenreich, in her 1976 essay, “What Is Socialist Feminism?”

Can’t we just call it “feminism”?

Would that we could! But some types of feminism aren’t especially concerned with racial or economic oppression. Corporate feminists might be content with a company marketing “The Future is Female” T-shirts and promoting women into management, but socialist feminists want a living wage and full benefits for the women who sew the shirts and care for the executives’ children. (Or better yet, the women who sew the shirts could run things, while enjoying publicly funded child care.)

One great example is Iceland’s 1975 women’s strike. Organized by socialists and radical women’s councils, the strike saw some 90 percent of Icelandic women take a day off from their jobs and chores. Schools and airlines shut down, bank executives had to perform customer transactions and a national newspaper printed at half its usual length for lack of women to operate the printing presses. Today, Iceland has one of the smallest gender gaps in pay and education in the world.

I’m a feminist and I want to be a socialist, but what about the Bernie bros?

This is a contentious question, so let’s just acknowledge that there are men who identify as socialists, and maybe even feminists, and still engage in misogynist behavior—from talking over women at meetings to harassment and assault. In our experience, most socialist groups today address the problem through anti-harassment policies, racial and gender quotas for elected leadership, and socialist feminist caucuses to make sure gender issues don’t get siloed. It’s not perfect, but that’s why feminists need to stake out an active, visible role on the Left: We need socialism to win, and it can’t win without us.

This is part of “The Big Idea,” a monthly series offering brief introductions to progressive theories, policies, tools and strategies that can help us envision a world beyond capitalism. For recent In These Times coverage of socialist and anti-capitalist feminism in action, see, “#MeTooHits Fast Food: Why McDonald's Workers Are Out on a Historic Strike Today,” ”Black Feminism Will Save Us All” and “What #MeToo Can Teach the Labor Movement.”