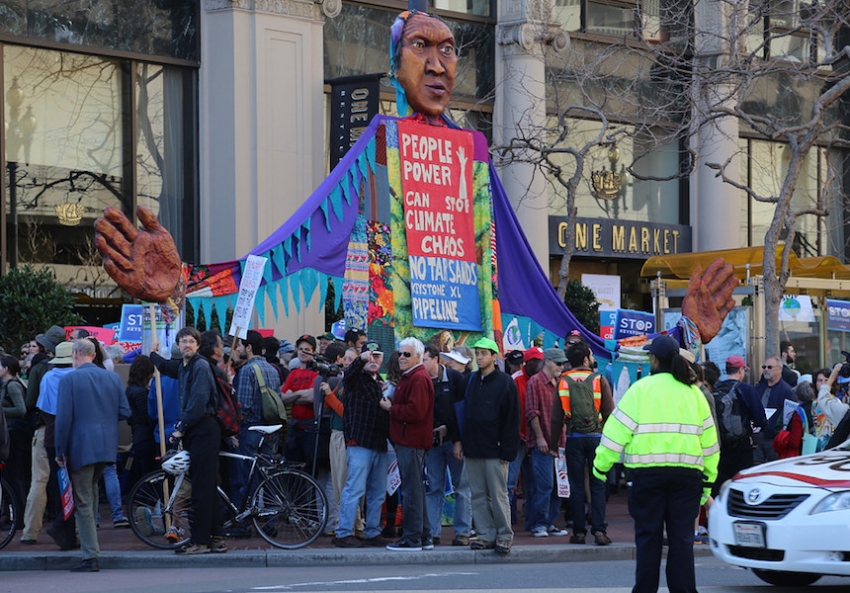 Indigenous organizers protest climate change in San Francisco in 2013. Some of the same organizations are returning for this week's climate actions. (Daniela Kantorova/Flickr)

“Nobody inside the summit wants to talk about leaving fossil fuels in the ground or reducing our energy consumption."

This Saturday, climate organizers from around the world are coming together to embark on a week of radical action in San Francisco.

Solidarity to Solutions Week (Sol2Sol) is organized by the It Takes Roots Alliance in direct response to California Gov. Jerry Brown’s market-based approach to the climate crisis. Brown is the driving force behind the closed-door Global Climate Action Summit being held in San Francisco September 12–14.

“Nobody inside the summit wants to talk about leaving fossil fuels in the ground or reducing our energy consumption,” says Kandi Mossett, the Native energy and climate campaign organizer for the Indigenous Environmental Network, a member group of the It Takes Roots Alliance. “It’s ‘how can we continue to make money while basically pacifying groups [by saying] that we’re working on the climate crisis’—and that’s through emissions trading schemes.”

The goal of Sol2Sol is to expose what they see as false solutions offered by supposed climate leaders such as Brown and to bring together a community of radical organizers to brainstorm ways to combat climate change and leave fossil fuels in the ground.

“We have to be at the table,” says Mossett. “Leaders are going to be making decisions that completely impact our future and impact us now, but we’re not allowed in.” Very few organizers from the alliance have been given access to the summit, she says.

For Mossett, the climate crisis is deeply personal and directly connected to her identity as an indigenous woman. She spent her childhood on the Fort Berthold Reservation in North Dakota, where she grew up thinking it was normal for everyone you know to have cancer. Her home was surrounded by nine coal powered plants as well as uranium mining.

Decisions being made behind closed doors at Brown’s summit will have serious stakes for indigenous communities throughout the country, says Isabella Zizi, 24. Zizi works with Idle No More SF Bay, a grassroots organization formed out of an indigenous grandmothers’ prayer group in Canada that has established a network of chapters throughout California. Idle No More SF Bay is a member group of the It Takes Roots Alliance.

Since childhood, Zizi has been all-too-aware of the recklessness and environmental racism of the fossil fuel industry. Growing up in Richmond, Calif., she lived in the shadow of the Chevron refinery there, which reported 304 accidents between 1989 and 1995 alone. In 2012 the refinery experienced an explosion that sent 15,000 members of the surrounding communities to the hospital. The explosion disproportionately endangered indigenous communities such as Zizi’s as well as other communities of color.

Despite its reputation as a distinctly progressive and green state, California has a history of politicians that Sol2Sol organizers call “climate profiteers.” Throughout his decades in office, Jerry Brown has been a key contributor to this legacy. Although he has worked with the U.S. Climate Action Center and held a prominent role in international climate negotiations, Brown has continuously supported the fossil fuel industry and antagonized climate activists.

Brown, who has taken millions in donations from fossil fuel companies, supports market-based solutions to the climate crisis such as a cap and trade system. Under such a model, overall emissions are limited and companies trade emissions credits, essentially creating a carbon economy. Critics say that cap and trade is a false solution, as the cap on emissions is too high, and fossil fuel companies are given plenty of loopholes.

Sol2Sol organizers are infuriated by Brown’s refusal to consider their demands for more radical action to combat climate change. The Indigenous Environmental Network, for example, envisions workers in polluting industries and frontline communities working togehter to facilitate an immediate “just transition” away from fossil fuels.

Sol2Sol will kick off with a People’s Climate March modeled off of the largest climate march in history in New York City in 2014. This march will be the largest ever West Coast climate march. As it will take place in the Ohlone Territory, it has a clear purpose of uplifting the voices of the Ohlone people, who were enslaved or forced out during the settlement of San Francisco. A prayer ceremony will also be held the following day at the West Berkeley Shellmound, a sacred Ohlone site.

Throughout the rest of the week, several other actions are planned, such as a protest outside of the summit itself, where participants may be risking arrest. Each of these actions will be preceded by trainings to ensure that participants will know how to stay safe.

Sol2Sol organizers will also lead dozens of educational and community building events such as prayer ceremonies, tours to local sustainable farms and a summit of their own where attendees can participate in workshops and plenary sessions.

Standing up to climate profiteers in such a difficult political climate isn’t easy, says Zizi. But she continues this risky work so that when other young people ask “what did you do in this time of distress” she can say she tried her best. “It’s time for all of us to rise together. I’m excited to see thousands of people have the same message and have the same heart.”

Isabel Bloom is a summer 2018 In These Times editorial intern.