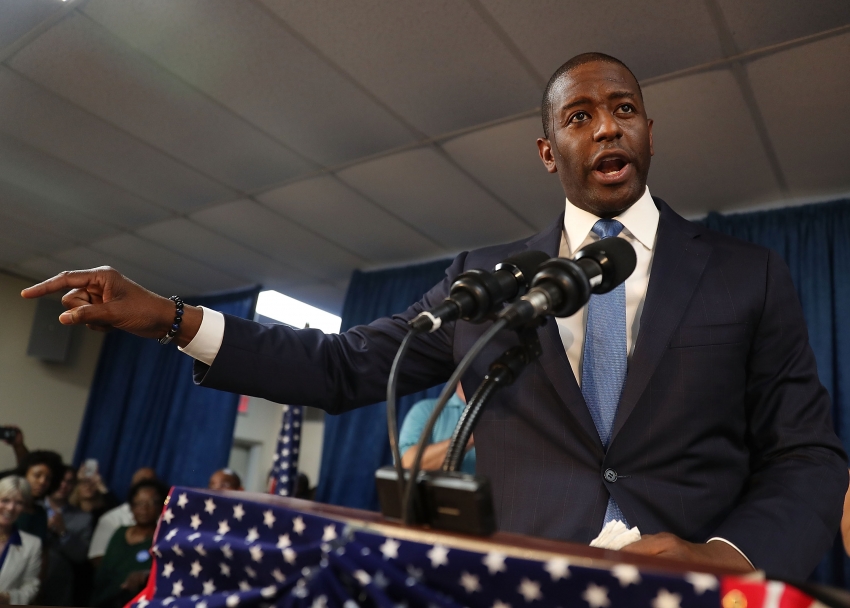 Gillum and other left challengers are winning on an economic agenda pushed for decades by black-led social movements.

While they have yet to call for the total overthrow of corporate power, each of these candidates has drawn from the political and intellectual firepower of those who have.

In the glow of his underdog victory in Florida’s Democratic gubernatorial primary last month, Andrew Gillum was pounced on by his Republican opponent for threatening to upend the economy as we know it. In what's likely to become a barrage of similarly themed attacks, GOP Rep. Ron DeSantis launched an oafishly racist warning about Gillum, the progressive Tallahassee mayor who would be the state’s first black governor. “The last thing we need to do is to monkey this up,” DeSantis said in a charge that even made Fox News blink, “by trying to embrace a socialist agenda with huge tax increases and bankrupting the state…That’s not going to be good for Florida.”

It remains to be seen whether the people of Florida agree. National polls have found overwhelming majority support for policies like Medicare for All, (including a majority of Republicans), raising the minimum wage, and ratcheting up corporate taxes, all touchstones of the progressive left that Gillum vocally championed during the primary in which he railed against an economic system that produces “devastating inequality.”

With such a strong emphasis on economic justice, Gillum joins a growing chorus of progressive black candidates who are challenging establishment-friendly Democrats up and down the ballot. Along with other insurgents like Georgia’s Stacey Abrams and Massachusetts’ Ayanna Pressley, Gillum has offered voters a vision of a more fearless politics that promises head-on confrontation with racial and economic injustice.

None of these candidates have explicitly called themselves socialists. And simply asking corporate titans to return some of their extravagant publicly-financed welfare hardly threatens the foundations of capitalism. But we also shouldn't erase the fact that each is running with the winds of popular progressive movements at their backs. And those movements have inherited the momentum of countless radical black organizers who came before them, many of whom were indeed socialists. So while they have yet to call for the total overthrow of corporate power, each of these candidates has drawn from the political and intellectual firepower of those who have.

Many active organizations, like the Movement for Black Lives, Black Youth Project 100, and Florida’s own Dream Defenders, are part of this larger movement. Each has released detailed policy agendas that argue freedom for black people must include throwing off the shackles of both racial and economic bondage.

Take the Dream Defenders, which was formed in the aftermath of Trayvon Martin’s horrific murder and helped fuel Gillum’s victory. It’s Freedom Papers document states defiantly: “By virtue of being born, each of us has the absolute right to adequate food, shelter, clothing, water, healthcare, effective public transportation, dignified work, living wages, and the right to form unions to protect themselves in the workplace.” The Papers share a lineage with an earlier generation of black activism. In 1967, the Black Panthers released its Ten Point Program, a document of extraordinary economic progressivism. In it, they called for policies like full employment, “an end to the robbery by the capitalists of our black and oppressed communities,” quality public housing and public education, and “completely free healthcare for all black and oppressed people.”

These demands were center stage even in the more established corners of the civil rights struggle. The 1966 Freedom Budget, released a year before the Ten Point Program, put forth its own ambitious vision. Drafted by the black progressives and socialists who had organized 1963’s March on Washington for Jobs and Freedom, the document sketched a practical plan for “wiping out poverty in America.” Among other things, it called for a “nationwide, universal system of health insurance” and a federal jobs guarantee.

The cast of troublemakers included Dr. Martin Luther King who began his “pilgrimage to Christian socialism,” as historian Thomas F. Jackson calls it, at an early age, writing in 1958 of his boyhood realization that “the inseparable twin of racial injustice was economic injustice.” Never far behind, and often out in front, was King’s always instrumental co-conspirator—the openly gay black socialist and lead organizer of the 1963 march, Bayard Rustin. And lastly, there was one of the great giants of labor history, leader of the Brotherhood of Sleeping Car Porters and longtime Socialist Party member, A. Philip Randolph.

Charging that the poor were “not getting their just share of our national wealth,” the authors began by diagnosing what ailed the country and then laid out a prescription of radical wealth redistribution. These demands and more were also echoed less prominently, though no less ferociously, by black feminist activists like Fannie Lou Hamer and Ella Baker.

That legacy is being channeled by a new generation of activists who face a similar set of challenges. More than fifty years later, the Economic Policy Institute finds that on issues from wages to income to family wealth, the economic landscape for black people remains bleak, and their chances for catching up to their white counterparts are almost unimaginable. Jaw-dropping reports from the Institute for Policy Studies have found that “median Black household wealth is on a path to hit zero by 2053,” and that without an intervention of some sort, it would take the average black family 228 years to build the wealth of today’s average white family.

What black leftists past and present have found is that Milton Friedman was dead serious when he wrote that “the social responsibility of business is to increase its profits.” From slavery to slavery by another name in the form of sharecropping and convict-leasing, to the official apartheid of the South and the cloaked apartheid of the North, to the marriage of profit and punishment in the criminal justice system, industry will squeeze profit from wherever it’s easiest to do so. In a country where black people sit on the bottom of pretty much everything, capitalism operates as a system of savage racism.

But what many black people across the country have realized is that there's nothing natural about these arrangements. Each is the product of human choices—and we can choose differently. One way is to harness the already massive power of public institutions to deepen the promises of democracy by freeing people from economic misery.

This continues to be a radical proposition. The issue of healthcare is a good place to pause and examine where past and present struggles meet. It's easy to forget, but before it was a litmus test for aspiring Democratic presidents, Medicare for All was a demand emanating from the streets, with black-led, hellraising organizations often at the front.

As recently as 2016, when the Movement for Black Lives released its policy agenda, including detailed plans for a national health insurance system, they were at odds with prominent figures in the Democratic Party. Just months before its release, Hillary Clinton had pronounced Medicare for All would “never, ever come to pass.” And to this day, a crew of establishment party operatives are dismissing the idea as the equivalent of candidates lighting their own campaigns on fire, facts to the contrary be damned.

The same can be said of a $15 minimum wage, paid sick leave, and free college. These policies may seem like uncontroversial no brainers if you restart the clocks of history from 2018. But each took massive public pressure to become ascendant in the Democratic Party.

So while it's certainly true that these sorts of policies aren’t considered “radical socialism,” as the Washington Post claims, this was not always so, and there was no guarantee that their day in the sun would inevitably come to pass. The demand that the profit motive be torn from the country’s system of healthcare delivery was radical enough to keep it locked out of polite conversation for decades. It’s road—out of the political wilderness and into consideration in the halls of power—was paved, as political science professor Corey Robin describes, by “movements of liberation that seek to undo hierarchy.”

The activists that populate these movements understand this better than anyone. As BYP100’s Founding National Director Charlene Carruthers recently said on Democracy Now!, today’s movement builders are less interested in the promises of charismatic leaders than they are in building an agenda that they can hold officials accountable to. “What we do in BYP100, what we do in multiple organizations across the Movement for Black Lives, is we focus on issues, not candidates. And if the candidate is not about the business of the platform that we need to move for our people, then we’re not going to support that candidate.”

This history makes unsurprising the fact that DeSantis locked in on criticizing Gillum as a socialist bogeyman. However clownishly racist his delivery, he was merely echoing one of the oldest attacks aimed at even the mildest expression of radical black opinion: That to entertain their demands was no different from weighing the demise of the republic itself.

These movements, to be fair to their critics past and present, would have certainly welcomed the annihilation of certain aspects of American life, namely its rigid hierarchies of race and class. The reason is plain: Many black thinkers, activists, and everyday laborers across history have understood that freedom is incomplete without a full-frontal assault on the alliance of private and state power that strangles the opportunity to lead a decent life.

DeSantis’ fear, then, is at least partially well-grounded. Not because Gillum, for however long he holds the national political spotlight, is the inheritor of this legacy, but because the movements that propelled him are.