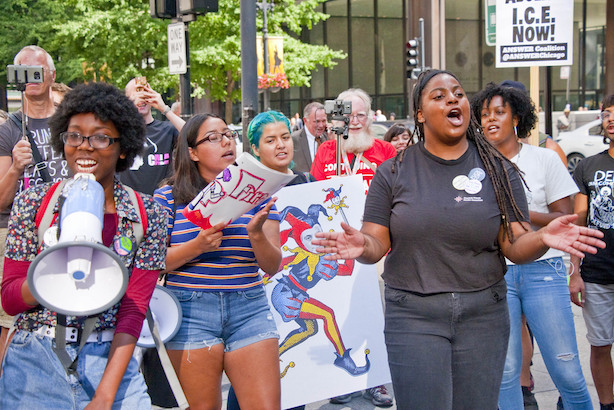 With Rahm Out, Chicago’s Black Youth Demand Mayoral Candidates Side With Communities—Not Police

As the mayoral race escalates, candidates will need to make their stance on the city’s police academy and investment disparity clear.

“I was shocked and frustrated,” says Destiny Harris, 17, describing her reaction last September when she learned that Chicago Mayor Rahm Emanuel was planning to build a $95 million police academy in her home neighborhood of West Garfield Park. Emanuel claims that the academy is a necessary response to the 2017 Department of Justice (DOJ) investigation, which revealed significant civil rights violations by the Chicago Police Department (CPD) and offered 99 suggestions for improvement.

West Garfield Park is a majority black neighborhood on Chicago’s West Side and its young people suffer most from lack of investment in their schools, after-school programming and stable jobs after graduation. Harris was infuriated that the mayor seemed to find funding only for policing and not for other resources her neighborhood needs.

Harris was not alone. This summer, she joined the No Cop Academy (NCA), a self-described “youth-led, adult-directed” nonprofit founded in September 2017.

NCA rejects policing as a solution to violence. Instead, they advocate investment in vital community resources such as education, housing, good jobs and healthcare. In 2013 when the School Board voted to close 54 schools across the city, four of those schools were located in West Garfield Park. Harris says that she and other residents were bewildered; Emanuel “claimed that the city didn’t have any money and then out of nowhere $95 million for a police academy.”

NCA has drawn attention in the past year for its tireless efforts to stop the development of the police academy. They have sued the city for withholding information about the origins of the plan for the police academy and also advocate constituent outreach to bring Chicago aldermen over to their side. Thus far they have the support of three out of 50 aldermen, including the particularly outspoken Ald. Carlos Ramirez Rosa. The City Council will vote on the developer for the police academy project this fall and then aldermen will have one final chance to vote down the plan for the academy.

Last week, NCA youth organizers gathered at a public event in West Garfield Park to present and celebrate their latest endeavor: “The Report,” a 30-page summary of the results of a survey in which they asked West Side residents for their thoughts on the police academy.

NCA volunteers canvassed 500 West Side residents between January and March and asked them four key questions that yielded the following results:

These results contradict Emanuel’s assertion that the police academy fits the desires of “every member of the West Side.” NCA organizers say that he never actually asked residents what they wanted. “We did the city’s job for them and talked to people in the neighborhood,” says Maria Hernandez, a West Side resident and Black Lives Matter organizer who helped to coordinate the community survey.

Proponents of the plan for the police academy, such as West Garfield Park Ald. Emma Mitts, claim that the project will boost economic development in the neighborhood in addition to its goals of improving policing in the city. Last November, City Council approved the use of  Tax Increment Financing (TIF) money from the district to purchase the land for the academy. TIF money is supposed to serve as extra funding for projects that promote economic development in “blighted areas” of the city. While the construction is projected to produce around 100 jobs, these would be temporary and thus would not have a significant economic impact on the local community.

The police academy has been Emanuel’s project since its inception. The upcoming 2019 mayoral race provides the opportunity to elect a candidate with different priorities when it comes to Chicago’s budget and policing methods, especially given Emanuel’s recent announcement that he will not be seeking re-election. Because the plans for the new academy are already in motion, it is an issue that all candidates will have to consider in their bids for mayor.

In These Times reached out to all candidates who had announced their bids by the beginning of September. Of the six who responded, none support the current plan for a police academy—still, very few took a concrete stand on NCA’s demands.

Mayoral candidates Dorothy Brown, Ja’Mal Green, Lori Lightfoot and Garry McCarthy all noted the importance of investing in police training to different extents while still underscoring the urgency of investment in underserved communities. Similarly, Troy La Raviere noted that the DOJ investigation meant that the city would have to rethink and reinvest in policing, but that $95 million was too big a price tag and that the academy alone would not address the DOJ’s 99 recommendations. Ja’Mal Green agreed, adding that we cannot pretend that police training is the same as economic development.

All of these candidates claimed to support NCA’s demands for investment in the West Side and underserved youth in general but seemed wary of taking too strong of a stance against investment in policing. This vague stance is not surprising coming from McCarthy, the ex-chief of police who was fired over the Laquan McDonald case.

Amara Enyia, the most recent candidate to announce her bid for mayor, claimed a position to the left of her competitors. Enyia is a West Side resident who has put in time organizing on the ground with GoodKids MadCity and believes that policing is not the answer to violence. Enyia wants to look beyond the issue of the police academy and reimagine not only the $95 million police academy budget but the entire $10 billion budget of the city. “It’s about critiquing the city’s priorities and about the fact that the way the city invests its resources is a reflection of those priorities,” says Enyia.

Through NCA, youth like Harris are taking concrete steps to promote change in the city. Earlier this month Harris and a friend from BLM organized their own canvass at Ald. Jason Ervin’s Back to School event to warn people about his support of the police academy.

As of today, NCA has endorsements from 80 organizations across the city, and the organization’s visibility and support is likely to spread with the publication of their survey. As the mayoral race escalates, candidates will need to make their stance on the city’s police academy and investment disparity clear. So far, few candidates have taken a strong position on the police academy and now is the time for them to think seriously about how they will differentiate themselves from the pack. Given that Emanuel will not be seeking another term, the race will be a chance to vote in a fresh perspective on how Chicago politicians engage with a legacy of racist budgeting in the city.

Isabel Bloom is a summer 2018 In These Times editorial intern.