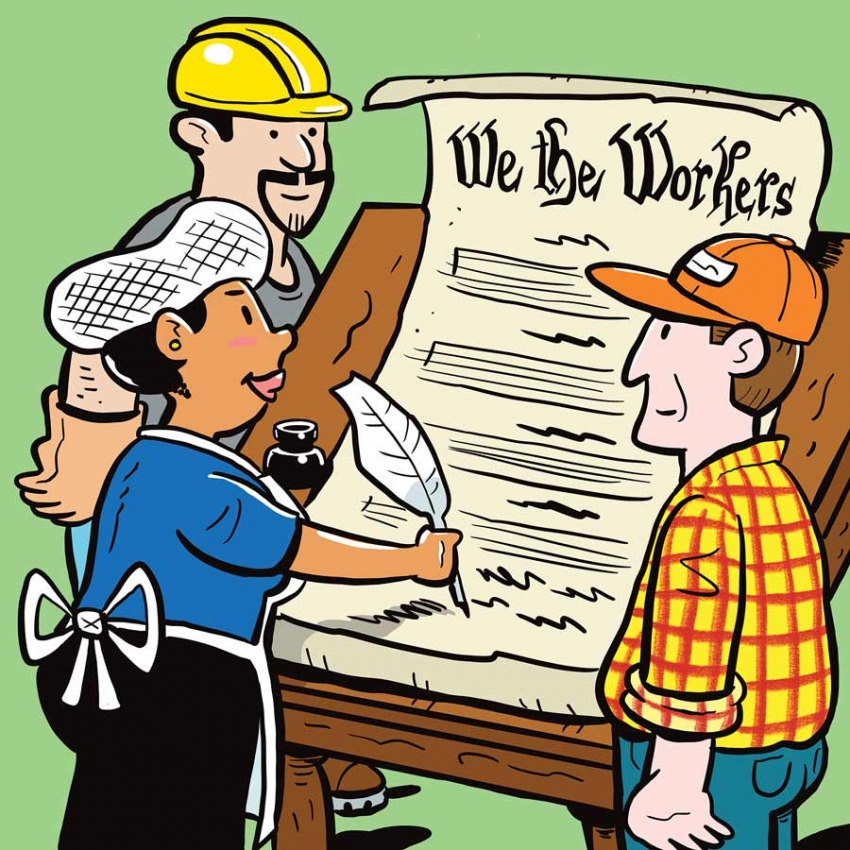 Socialists and progressives have a variety of ideas to bring democracy into the workplace.

1. Worker control of the workplace

“If you believe in democracy, then how in the world can you justify not instituting it in the place where we spend most of our adult lives?”
—Richard Wolff, author of Democracy at Work: A Cure for Capitalism

Are workers really qualified to run a business?

Here’s a better question: Are bosses? Top-down businesses have brought us overpaid executives, terrible working conditions, environmental destruction and, often, poorly made products. Meanwhile, a 2016 study found that, overall, worker cooperatives—where employees own the business and decisions are made one-worker, one-vote—are more productive than their capitalist counterparts. In politics, we take for granted that unaccountable elites can’t be trusted and that everyone deserves a say. The same, socialists argue, should go for the workplace.

So, cooperatives, OK. How else are progressives building workplace democracy?

One important tool is plain old unions. Sen. Bernie Sanders (I-Vt.) introduced the Workplace Democracy Act, which would make it easier for employees to negotiate their wages and working conditions, and require bosses to bargain.

Another is “codetermination”: worker representation on a company’s board. Sen. Elizabeth Warren (D-Mass.) has introduced a bill that would have workers elect 40 percent of the boards of large corporations. Warren is framing it as a way to save capitalism, but it’s still a step toward worker control over the means of production.

Is codetermination something Warren just made up?

Nope! What seems a radical idea in the United States—right-wing media freaked, National Review bizarrely called it a plan to “nationalize everything”—is actually pretty common. Germany and Sweden have had codetermination for decades, contributing to greater job security while keeping growth strong. Codetermination polls well here, too: Data for Progress found supporters outnumbered the naysayers in every polled district, with 52 percent support nationwide.

How do we make this happen?

It’s true neither Sanders’ nor Warren’s bill is likely to pass under Trump. But we can start building workplace democracy from the ground up. Co-op incubators such as Cooperation Jackson and Prospera are helping new worker-owned businesses. Organizations such as the Democracy at Work Institute are helping transition existing businesses into cooperatives. And we can demand our elected officials support unions, co-ops and codetermination. Meanwhile, think tanks like the Democracy Collaborative are sketching out a vision for an entire democratic economy, transforming workplace democracy from the exception to the rule.

This is part of “The Big Idea,” a monthly series offering brief introductions to progressive theories, policies, tools and strategies that can help us envision a world beyond capitalism. For recent In These Times coverage of workplace democracy in action, see, “Bernie Sanders Has a Sweeping Plan to Expand Union Rights and Workplace Democracy,” “Defending Democracy Means Organizing Your Workplace“ and “America’s 200-Year-Long Battle for Workplace Democracy​.”