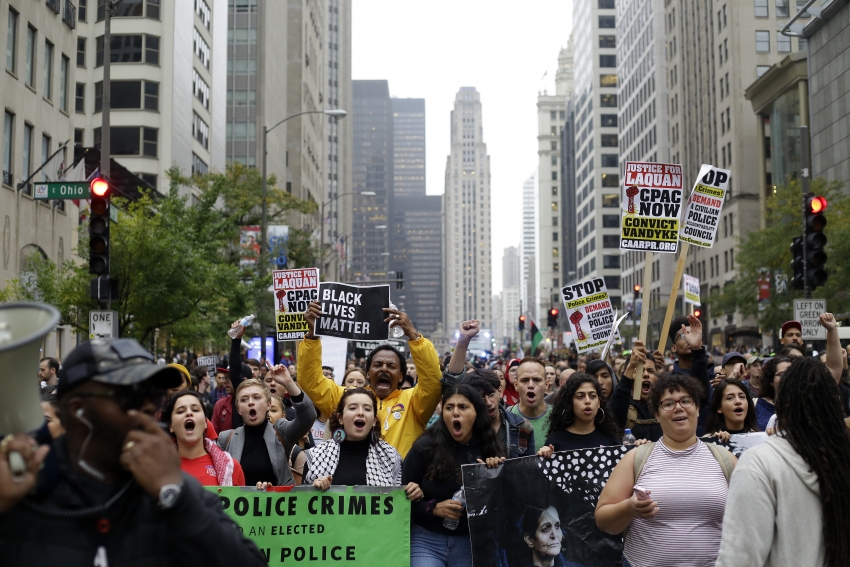 The murder conviction of Chicago cop Jason Van Dyke didn’t happen in a vacuum—it was the result of years of community outrage over police violence.

In both the Jon Burge and Jason Van Dyke cases we see the power of public outrage, community activism and Black-led multiracial movements.

On October 5, 2018, a Cook County jury comprised of one Black woman, three Latina women, an Asian man, and seven whites returned a verdict of guilty of second-degree murder against Chicago police officer Jason Van Dyke. The jury also found Van Dyke guilty of 16 counts of aggravated battery — one for each of the 16 shots that Van Dyke fired into Laquan McDonald’s body over a 14-second period, all but two while he was writhing on the ground. The jury found that Van Dyke believed that he had the right to kill Laquan but that this belief was not reasonable, thereby convicting him on a charge of second-degree murder. The conviction carries a 4-to-20-year sentence with probation as an option. Meanwhile, each aggravated battery count — classified as aggrieved because the batteries were committed with a weapon — carries a 6-to-20-year non-probationable sentence. Hence, according to criminal defense experts, the most likely minimum sentence for Van Dyke would be 12 years, with a very unlikely maximum of 90 years.

The convictions were a victory for activists who waged the “Justice for Laquan” campaign in the streets and at the courthouse for nearly three years after the shocking video of police murder came to public light. Indeed, many Chicagoans applauded the verdict as just. However, the Illinois Fraternal Order of Police (FOP), true to its racist history, called the trial a “sham” and a “disgusting charade,” and the verdict “shameful,” saying the jury was “duped into saving the asses of self-serving politicians at the expense of a dedicated public servant.” In the Southwest Side Mount Greenwood neighborhood, where many of Chicago’s white officers live, blue ribbons supporting the police were tied to almost every tree and light pole, and according to the Chicago Sun-Times, one resident went so far as to call Van Dyke a “political prisoner.”

The verdict was front-page news over the weekend, and the Chicago Sun-Times published an article claiming that “Van Dyke’s trial is now destined to be listed alongside other key Chicago police controversies, including the face-off with demonstrators outside the 1968 Democratic Demonstration, the 1969 police shooting of Black Panther leader Fred Hampton, and decades of alleged torture committed by the so-called midnight crew overseen by Chicago police Cmdr. Jon Burge — who died during the first week of Van Dyke’s trial.”

I came to Chicago in the summer of 1968, a week after what the Kerner Commission called a “police riot,” and have been involved in the legal struggles that arose from the notorious events referenced by the Sun Times ever since. From that perspective, a deeper look into Chicago’s racist police history and its connection to the Laquan McDonald case is warranted.

The Murder of Fred Hampton and Mark Clark

On December 4, 1969, 14 heavily armed Chicago police officers assigned to the office of Cook County State’s Attorney Edward Hanrahan, conducted a murderous predawn raid on a West Side apartment where numerous Black Panther Party (BPP) members were staying. Firing more than 90 shots from shotguns, machine guns and pistols, the raiders murdered the 21-year-old chairman of the Black Panther Party, Fred Hampton, as he slept in his bed. They also killed Peoria BPP leader Mark Clark, and wounded several other Panthers. A massive police cover-up followed, as did outrage in the African American community. The cover-up featured blatantly false police reports, perjured testimony, fabricated ballistics reports, and a slanderous official publicity campaign. President Richard Nixon’s Justice Department, led by John Mitchell of Watergate infamy, investigated but refused to indict any of the police raiders or the prosecutors who planned and approved the raid, but renewed protests led to the appointment of a Cook County special prosecutor.

Hampered by the chief judge of Cook County and a rigged grand jury, the special prosecutor was not able to obtain murder or attempted murder indictments, but rather only indictments for obstruction of justice against the raiders and State’s Attorney Hanrahan, who was running for re-election as Mayor Richard J. Daley and the Democratic machine’s chosen candidate. The case was assigned to a Democratic machine judge, and the raiders waived the jury and proceeded to trial before the judge. The special prosecutor rested his case the week before the 1972 election, and the judge dutifully granted a verdict for the defendants, thereby giving Hanrahan a clean record before the voters went to the polls. As was the case with the brutal police officers who victimized demonstrators and reporters at the Democratic National Convention, none of the perpetrators of the deadly violence went to jail. This reinforced the racist reality that Chicago police officers — acting with Cook County prosecutors, unblinkingly backed by the Police Union, and protected by Cook County judges and the police code of silence — could act with absolute impunity when it came to policing Chicago communities of color.

However, the mass movement in the African American community that had formed around the murders of Hampton and Clark returned its own verdict, voting Hanrahan out of office. Ten years later, this movement was largely responsible for electing Chicago’s first Black mayor, Harold Washington.

Also, in 1972, Chicago police detective Jon Burge and his midnight crew of “asskickers” began a 20-year reign of terror in Chicago’s African American communities, torturing more than 125 people of color with electric shock, suffocation, mock executions, and other forms of racist brutality during interrogations. Prosecutors participated in the interrogations, falsely denied knowledge of the brutality, and used the confessions obtained to send the victims to prison and, in some cases, to death row. Ten years later, in 1982, the state’s attorney of Cook County, Richard M. Daley, who was Richard J. Daley’s son, was officially informed about the torture but chose to ignore it, leading to a second decade of torture and wrongful convictions. For their part, Cook County Judges uniformly rejected the mounting evidence of torture presented in their courtrooms.

In 1989, the cover-up was pierced, thanks in large part to a federal civil rights trial, an anonymous police source, and an investigative reporter. Activists led protests that compelled Burge’s firing in 1993, but no prosecutors, federal or Cook County, sought to prosecute Burge or his crew, and the police department and then Mayor Richard M. Daley suppressed, then rejected, an internal report that condemned the torture as “systematic.” Undeterred, the Fraternal Order of Police continued to defend Burge and his men and held them up as heroes.

The battle to expose the torture scandal and to seek justice for the victims continued, and nearly a decade later, in 2002, a Cook County special prosecutor was appointed, but he had close ties to the Daley machine. After a four-year investigation that cost Cook County taxpayers more than $7 million, the special prosecutor returned no indictments, instead releasing what was widely considered to be a whitewashed report.

Once again, the failure to indict occasioned outrage and disgust, so the Chicago City Council and the Cook County Board of Commissioners held highly publicized public hearings and issued resolutions calling for a federal investigation, a call that was underscored by similar findings made by the United Nations Committee Against Torture. This time the US Attorneys’ Office took heed, but the statute of limitations had long since expired on the torture itself. As a result, in October of 2008, the Feds indicted Burge for lying, under oath, about the torture that he had masterminded, and for obstruction of justice.

In front of a fair and impartial federal judge, Burge and his lawyers, who were paid handsomely by the Fraternal Order of Police, were forced to take their chances with a predominantly white federal jury. Five Black torture survivors powerfully told their stories, and were subjected to a transparently racist grilling by Burge’s lawyers. A Burge associate, testifying under a grant of immunity, demonstrated the power of the police code of silence by backing off from his prior grand jury testimony, in which he had admitted to witnessing Burge torturing one of his victims. Burge, sometimes tearful, denied everything from the stand.

Nonetheless, swayed by the enormity of the underlying torture, the jury convicted Burge of perjury and obstruction of justice in June of 2010. The following January, the judge, while condemning the police department, the state’s attorneys’ office, and the Cook County judiciary, sentenced Burge to four and a half years in the federal penitentiary. None of Burge’s confederates were ever prosecuted for their crimes.

Meanwhile, the struggle against torture continued. An intergenerational and interracial movement formed, and, largely as a result of its activism, the City of Chicago granted a historic package of reparations to the survivors.

Parallels to the McDonald Case

When we view the McDonald case through the lens of Chicago history, we can identify many parallels. We see outrageous and overtly racist police violence; a cover-up that is exposed despite the best efforts of the police involved; and the complicity of police superintendents, mayors, prosecutors and other high-ranking officials in the cover-up. We see the police code of silence reaching into the Burge and Van Dyke trials, with police partners and associates defying the prosecutors who granted them immunity in an attempt to aid their fellow officers. We see racism as the elephant in those court rooms, unspoken by the prosecutors, but fanned at every opportunity by the defense, which depicted the victims at every opportunity as subhuman monsters. We see a powerful and racist police union that has defended the indefensible for the past 50 years, exalting Burge and Van Dyke, paying for their defenses, and intimidating police witnesses in the courtroom when they are summoned to testify against their fellow officers.

But we also see that even a predominantly white jury can summon the courage to do the right thing, at least when the police crime is so enormous and the proof so clear as it is in the Burge and Van Dyke cases. Most importantly, we also see the power of public outrage, community activism and Black-led multiracial movements that march, demonstrate, disrupt and demand a seat at the table. These forces must continue to march forward, so long as the fundamentally racist criminal injustice system represses and incarcerates communities of color.

This story first appeared at Truthout.