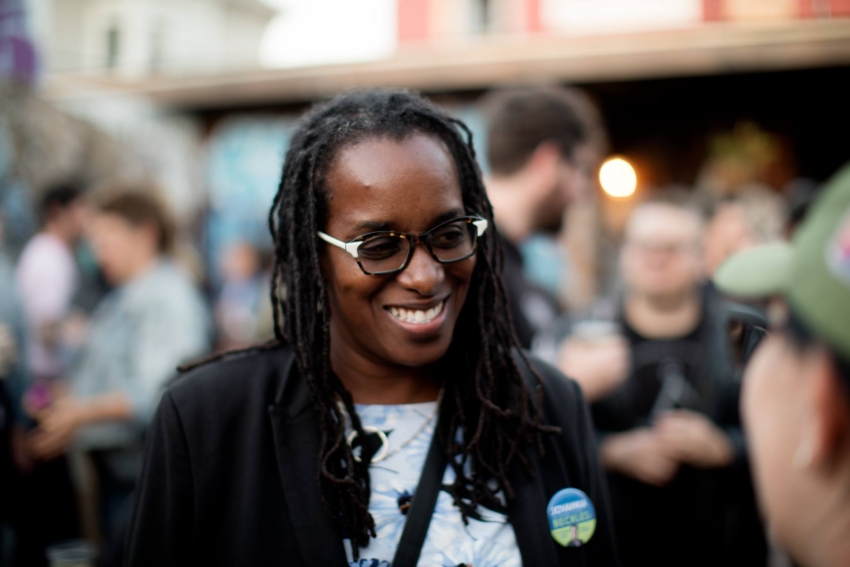 Beckles is running in the East Bay on a solidly left-wing platform and her campaign is gaining steam ahead of the November 6 election.

“My perspective as a black woman on the Left is so important and valuable in this race,” Beckles says.

When democratic socialist Alexandria Ocasio-Cortez won the June 26 Democratic primary for New York’s 14th Congressional District, her election made national news, launching her into the spotlight as the new standard bearer for the Left in the electoral arena.

Since that victory, other open democratic socialists have won primaries across the country, including Rashida Tlaib in Michigan, Sarah Smith in Washington and Julia Salazar in New York City. This new class of left challengers may soon gain company from California’s Bay Area, where another democratic socialist, Jovanka Beckles, is running in a high-profile election for District 15 State Assembly.

Wicks, who during her time as a Clinton state director was referred to as “Buffy the Bernie Slayer” has also been endorsed by former President Obama. Beckles, meanwhile, has the support of Our Revolution, an offshoot of Sanders’ 2016 campaign. The race conjures obvious parallels to the 2016 Democratic presidential primary. But Beckles is quick to point out that it’s all about issues and policy, not re-litigating the past.

“We’re Democrats. We’re working people. We need to not allow others to separate [or] divide us,” Beckles tells In These Times. “For me, this is not about Hillary versus Bernie. This is about money and outside interests coming in and telling us what we need as opposed to allowing leaders, particularly leaders of color, to have to a seat at the table. This is about whether or not we are going to have a top-down kind of leadership versus a bottom-up leadership.”

But Beckles, who came in second to Wicks in the June primary, has the backing of a number of high-profile progressive groups including the Working Families Party and the Democratic Socialists of America (DSA), along with Our Revolution, more than a dozen environmental groups and over 20 labor unions.

Not everyone is on board. Ahead of the primary, East Bay Express, an Oakland based weekly newspaper, endorsed Buffy Wicks and Dan Kalb, claiming Beckles “had the fewest ideas for solving California's problems.”

Beckles, however, is not bothered by these criticisms. “I know that when you’re coming from a place of modern politics, I think it might be hard to give credit to someone who is being a revolutionary [and] being innovative,” she says. Indeed, Beckles is running on a solidly left-wing platform, including Medicare for All, universal affordable housing, a $20 statewide minimum wage, a 36-hour work week, free public college and a Green New Deal.

Born in Panama, Beckles moved to the Bay Area after college in 1989. Witnessing social injustice throughout her career as a mental health professional shaped her decision to get involved with local politics. She became the first openly lesbian member of Richmond City Council when she was elected in 2010. Her campaign was supported by Richmond Progressive Alliance (RPA), a grassroots coalition most known for challenging Chevron’s oil refinery and holding the fossil-fuel giant accountable to the city’s residents. In retaliation for her role reining in the power of Chevron, the corporation spent over $3 million in ads to defeat Beckles and other opponents during the 2014 election cycle.

During her time on the council, Beckles has supported minimum-wage increases, protections for renters and the “Ban the Box” ordinance, which provides formerly incarcerated people with more equal opportunities in employment and education. She has also worked to improve community relations with the Richmond Police Department, an entity she has openly criticized.

Beckles says she wants to gain a larger platform in order to support policies that will help California’s most marginalized communities. Richmond City Council’s progressive policies can only go so far without changes in state legislation. The city passed rent control in 2016, for example, but it faces limitations with current state laws.

Not surprisingly, housing has been one of the focal points of the race. Beckles was the only candidate who ran on repealing Costa-Hawkins, a 1994 law that restricts rent control in California. Skyrocketing rents are an issue plaguing the state, especially longtime residents in Richmond and Oakland who are being displaced by thousands of people who have been priced out of San Francisco over the last decade. Wicks, meanwhile, has called for reforming the law.

The question of whether or not to repeal Costa-Hawkins will be put to voters in November through the Proposition 10 ballot measure. If passed, Prop 10 would allow California cities like Richmond to pass rent control ordinances and expand them to single-family homes and new construction.

Beckles believes Wicks buys into the argument that repealing the law will make housing worse. But Beckles sees the issue differently. “What it’s going to do is stop people, particularly people of color, poor working people, from being displaced,” says Beckles. “When you see people working 40 hours a week having to live in their cars, on the streets, or on the Berkeley Marina, that is a huge red flag. We are in a crisis. Reforming Costa-Hawkins is not going to end this crisis. Repealing it is.”

One of the challenges facing Beckles’ campaign is fundraising, since she does not accept corporate donations. Her largest campaign donations to date have come from labor groups, according to Berkeleyside.

“We’re not going to be able to raise as much money as the other candidate, taking money from the 1%,” she says. “When the greater class invests in a candidate, you better believe they are looking for a return on their investment. They are not investing in me. They are investing in my opponent, and they are doing that for a reason.”

But with all the progressive energy behind Beckles, why was Wicks able to outperform her in the primary?

Steve Early, Richmond resident and author of Refinery Town: Big Oil, Big Money, and the Remaking of an American City, thinks he knows. “There’s certainly a type of Democratic Party voter in one of the more left-leaning districts in the state, who [is] probably more comfortable with a nice policy wonk, Obama administration alum like Buffy rather than somebody like Jovanka,” says Early.

Abigail Gutmann-Gonzalez, Vice Chair of the East Bay chapter of DSA, concurs. “Buffy Wicks is a democratic establishment insider. She knows what to say. She has the policy language down right,” she says.

With just a few weeks left before the election, Early, who followed Beckles’ previous campaigns, predicts Wicks’ big business donors will attempt to smear Beckles. And it wouldn’t surprise him if those whose financial interests were threatened by Beckles’ accomplishments in Richmond seize the opportunity to join in.

Richmond Mayor Tom Butt endorsed Wicks, which was not a complete surprise considering the tensions between him and Beckles. While he has spoken against some of the harassment thrown at Beckles over the years, he has made his disdain for her known through his online newsletter. On April 26, he wrote, “I cannot in good conscience recommend that anyone vote to send her to the California Assembly where she would most surely be an unmitigated disaster.”

Beckles says she sees why Butt would go with Wicks rather than supporting her, given that the two do not agree on most issues, including passing Proposition 10. “He puts profit over people, unlike me. I put people over profit,” she says.

Gutmann-Gonzalez notes that Beckles stood in solidarity with University of California workers (AFSCME Local 3299) during their strike in May. “She is standing up for the interests of working people,” Gutmann-Gonzalez says. Beckles, who is a member of East Bay DSA, was endorsed by the organization in 2017, and they have since supported her campaign with 250 volunteers.

Beckles has been gaining momentum and recently scored the endorsement of powerful House Rep. Barbara Lee (D-Calif.). Her supporters hope that her volunteer-powered campaign, progressive credentials and bold vision are enough to help put her over the top next month.

“Jovanka is a working Teamster,” says Early. “She used to come work in the streets. [She] was part of that, you know, radical group in Richmond that took on Chevron. You can look at the same record and, depending who you are, you get nervous or start cheering her on.”

Beckles’ politics are not the only significant factor in this election. “My perspective as a black woman on the Left is so important and valuable in this race,” Beckles says.

According to the San Francisco Chronicle, current AD-15 Assemblyman Tony Thurmond is the only black representative of the Bay Area in state government. If Beckles doesn’t win in the race to replace him, a demographic that makes up seven percent of California’s population will not have a representative who looks like them.

“I think we [people of color] really need to be able to have a seat at the table if we are going to successfully create the kind of laws that benefit us, level the playing field, and bring about equity and justice for all,” Beckles says.

Keisa Reynolds is a freelance writer.