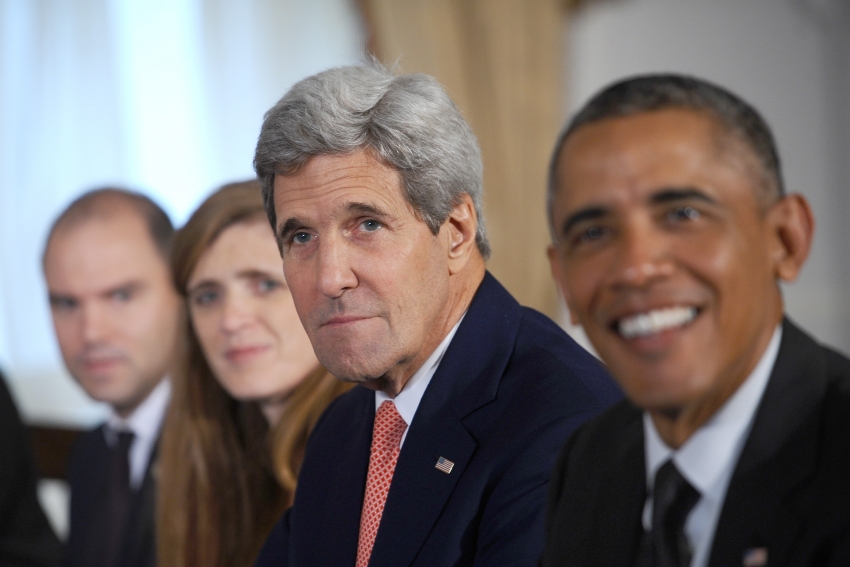 When Will Obama Aides Come Clean About U.S.-Saudi War Crimes?

Now that Saudi Arabia has become a P.R. liability, Samantha Power and Ben Rhodes have quietly condemned the war in Yemen. But when they had the power to stop it, they were complicit.

Understated and self-serving admissions by Power and Rhodes demand an examination of what real accountability should look like when one is complicit in unjust war.

It took the apparent murder and dismemberment of Washington Post columnist Jamal Khashoggi for the violence of the Saudi monarchy to finally register with the U.S. media and political elite. Since March 2015, the United States, Saudi Arabia and other allies have waged a war on Yemen that has killed tens of thousands of people, pushed the poorest country in the Middle East to the brink of famine and unleashed a devastating cholera outbreak. On behalf of its Saudi partner, the United States has shipped arms, refueled bomber jets, deployed troops and provided political cover—all without a congressional vote, serious political debate or meaningful media coverage.

Recently, the dogged work of activists and the war’s undeniable brutality have led to greater scrutiny from some in Congress. Also among the war’s new critics are former high-ranking Obama aides, including former UN Ambassador Samantha Power and Deputy National Security Advisor Ben Rhodes, both of whom got in line behind the U.S.-Saudi war on Yemen and defended the intervention. As U.S. participation in Saudi war crimes becomes a P.R. liability for those who built their personal brands on the Obama administration's supposed moral authority, former aides’ criticisms force us to grapple with what constitutes atonement for complicity in mass killing—and how to distinguish true accountability from a hollow exercise in image rehabilitation.

On September 26, Power tweeted her support for a bill introduced by Rep. Ro Khanna (D-Calif.) to invoke the War Powers Resolution and end U.S. backing of the Saudi-led war. Noting the “horrific, pointless bloodshed,” she acknowledged “we in the Obama admin should have cut off aid.” On October 4, Rhodes called the War Powers Resolution “a much-needed check on a humanitarian and strategic catastrophe in Yemen.” While any acknowledgement of wrongdoing, no matter how understated, is better than nothing, their half-hearted attempts demand a more thoughtful examination of what real public atonement—and justice—should look like when one admits to complicity in an unjust war of aggression.

What we do know is that, when Power in her role as a UN ambassador actually had the power to help stop the war on Yemen, by publicly breaking with her boss and encouraging meaningful action at the United Nations, she did nothing. Instead she embraced a policy of silence—and shielded the U.S.-Saudi coalition from meaningful international scrutiny as it dropped bombs on homes, schools, hospitals and funerals.

Rhodes, for his part, as deputy national security advisor, did not publicly dissent from Obama’s decision to send the United States into the war. Rhodes acknowledged his culpability in a revisionist October 12 piece for The Atlantic, which downplayed the Obama administration’s direct responsibility for atrocities. He wrote of the Yemen war, “Looking back, I wonder what we might have done differently, particularly if we’d somehow known that Obama was going to be succeeded by a President Trump.” In reality, the horrors of the war were fully underway during the Obama administration.

In an eyebrow-raising tweet published October 21, Rhodes claimed that the Obama administration’s relationship with Saudi Arabia grew “chilly.” In reality, throughout his presidency Obama offered the kingdom more than $115 billion in weapons, as well as military equipment and training, and at the end of his tenure, he collaborated with Saudi Arabia on an aggressive war that is still ongoing.

Understated and self-serving admissions by Power and Rhodes demand an examination of what  real accountability should look like when one is complicit in unjust war. Neither’s critique included an exhaustive account of their wrongdoing or a robust plan to make things right. Power and Rhodes are following the well-trod path in which lawmakers and White House officials support U.S. wars of aggression only to admit, years later and with little personal consequence, that they made a mistake. From Sen. Kay Bailey Hutchison (R-Texas) to Sen. Chuck Schumer (D-N.Y.) to Hillary Clinton, quietly acknowledging that the Iraq War was a bad idea has become a political rite of passage. These penitents fail to mention that their actions (or lack thereof) contributed to the deaths of more than a million Iraqi people. And the media allows them to simply issue a vague mea culpa and move on.

Politicians and officials likely make the calculus that it's less politically risky to support bipartisan wars at the time, even if it means having to apologize for it later. (Of course, following the polls is not always a winning strategy over the long run, as Clinton learned when she lost to Obama in the 2008 presidential primary, likely due to her support for the Iraq War.)

Power and Rhodes’ support for the War Powers Resolution is one step toward rectifying the harm they have done. Obama, meanwhile, remains silent. But the architects of war must not be allowed to determine the parameters of their own accountability. The question remains: What would a real public apology for mass murder entail? Vowing to leave public life, dedicating one’s remaining days to ending the war and repairing the damage? Who should decide what reparations mean? Certainly, Yemenis who have been harmed, including those who were children when Obama led the United States into the war in 2015 and must now grow up with a decimated education and medical system, should be at the forefront.

Nothing is stopping Power and Rhodes from giving a full and honest account of who was responsible for advocating, overseeing and covering up the horrors of the Yemen War, starting with themselves. This would provide useful information about how U.S. institutions function, whose interests were served at the expense of the Yemeni people, who is undeserving of re-election and political power, and what keeps the war machine whirring. It would build political pressure to finally end the war, far more than a handful of muted tweets and articles ever could.

But that’s not likely to happen. Far more likely is that former aides will issue vague regrets without providing any real inventory of their own roles, while raking in undisclosed—and presumably high—fees for lectures on human rights and foreign policy. Instead of buying into this ex post facto rebranding, it’s up to all of us to make the launching of unjust wars of aggression politically nuclear—and to ensure that no one can get away with shrugging off the killing of tens of thousands of people as an unfortunate, but forgivable, “mistake.”