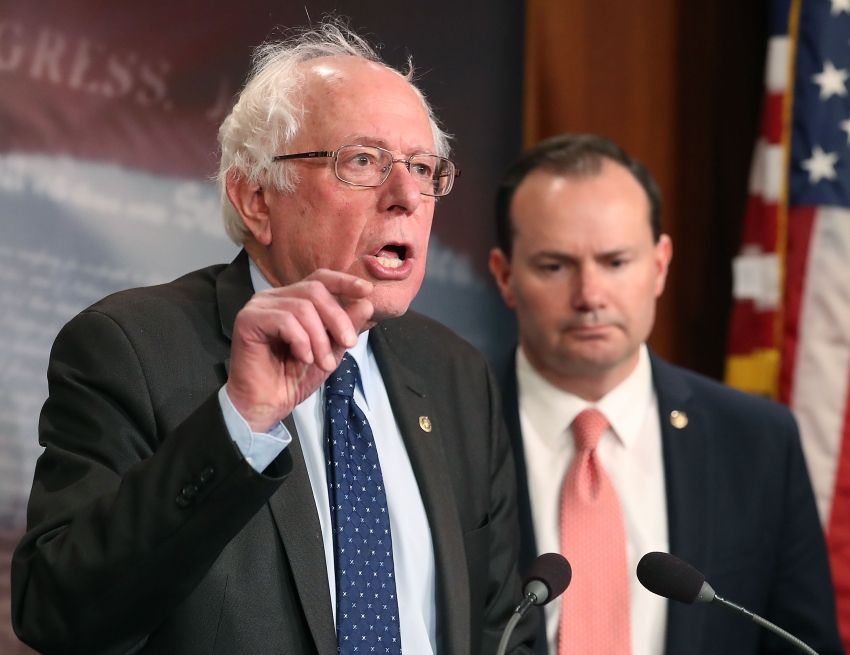 The Senate Just Took the Biggest Step Yet Toward Ending U.S. Support for the Yemen War

After years of protest against the devastating onslaught, the Senate finally took steps to halt the war in Yemen.

The resolution provides Congress its proper authority to answer the question of whether the United States should provide resources to a cruel and destructive war in the Middle East.

After more than three and a half years of participation in the ruthless Saudi-led war on Yemen, the Senate on Wednesday took the most significant step yet towards stopping American involvement in the onslaught, which has killed tens of thousands of people.

The Senate voted 63-37 in favor of holding a debate on Senate Joint Resolution 54–introduced by Sens.Bernie Sanders (I-Vt.), Mike Lee (R-Utah) and Chris Murphy (D-Conn.). The measure invokes the War Powers Resolution of 1973 to force a vote to “remove United States Armed Forces from hostilities in or affecting the Republic of Yemen.” This is the first time a chamber of Congress has advanced a War Powers Resolution, and it marks a considerable victory for opponents of the war, whose previous efforts to debate the resolution narrowly failed in the Senate in March after 10 Democrats came out in opposition.

The development came after opponents of the war staged protests targeting the offices of key Senators. “With millions of Yemenis on the brink of starvation, those of us who've long campaigned for Congress to end the US war on Yemen are anxiously awaiting the vote on S.J.Res.54, which is now finally possible,” said Shireen Al Adeimi, an assistant professor at Michigan State University and activist who mobilized in support of this resolution.

Ahead of the vote on the Senate floor Wednesday, Sen. Sanders said, “The fact is the United States, with almost no media attention, has been Saudi Arabia’s partner in this horrific war. We have been providing bombs the Saudi-led coalition is using, refueling their planes before they drop those bombs, and assisting with intelligence. And in too many cases our weapons are being used to kill civilians.”

While the vote does not, in itself, end the Saudi-led war, it is the latest indication that political winds are shifting against it. The war has pushed Yemen to the brink of the worst famine in a century–leaving 30 percent of the country’s children under the age of five suffering from acute malnutrition, or “wasting,” according to the Under-Secretary-General for Humanitarian Affairs at the United Nations. As a result of the war, over 3 million Yemenis have been internally displaced, the country continues to suffer the worst cholera outbreak in modern history and more than 8 million children lack access to safe water and sanitation. The situation in Yemen is widely seen as the worst humanitarian crisis in the world, and the U.S.-Saudi coalition is responsible for the vast majority of civilian deaths.

The resolution, however, includes a carve-out that permits “operations directed at al Qaeda or associated forces.” This exception essentially greenlights the U.S. government’s ongoing—and deadly—covert drone war, and deployment of a classified number of troops, purportedly to fight Al Qaeda. Notably, the Saudi-led war has allowed Al Qaeda to gain significant territory—and there is evidence the U.S. coalition has fought alongside Al Qaeda affiliates.

The vote follows a spate of high-profile atrocities, including the Saudi-led coalition’s August 9 bombing of a school bus in Yemen’s northern Saada province that killed 54 people, 44 of them children. As momentum turns against the war, even former Obama administration officials such as Samantha Power and Ben Rhodes are coming out against the war, albeit playing down the Obama administration’s responsibility for unleashing and overseeing U.S. participation in the onslaught.

On November 9, President Trump claimed that he would suspend the U.S. military’s mid-air refueling to assist airstrikes in Yemen. However, this decision can be reversed, and it has been insufficient to pressure the Saudi coalition to stop the bombings. As recently as November 26, a mother and her five children were killed in a Saudi-led airstrike.

Trump later affirmed the U.S. alliance with Saudi Arabia on November 20 and cleared that country’s leadership of wrongdoing in the killing of Washington Post columnist Jamal Khashoggi. Khashoggi’s murder, widely seen as a targeted political assassination ordered by Saudi Crown Prince Mohammed bin Salman, sparked international outrage and led many political leaders to call for a more aggressive response from the U.S. government.

And on November 27, CNN reported that “The U.S. has ‘slammed the brakes on’ a United Nations Security Council resolution calling for a limited ceasefire and increased humanitarian aid in Yemen over concerns about angering Saudi Arabia,” according to two sources.

With the Trump administration unwilling to take any steps to end U.S. participation in the Saudi-led war on Yemen, the resolution provides Congress its proper authority to answer the question of whether the United States should provide resources to a cruel and destructive war in the Middle East.

Two of the Democratic holdouts on supporting the resolution were Rhode Island Sens. Jack Reed and Sheldon Whitehouse. David Segal, executive director of Demand Progress and former Rhode Island state representative, was part of a large-scale effort to push the senators to get behind the legislation. “Reed and Whitehouse have received hundreds of calls from constituents over the last few days, and much more pressure spread throughout the year.”

After Sen. Reed announced he would support the resolution on Tuesday night, the punk band Downtown Boys had hundreds of fans join a call to Sen. Whitehouse to demand he too back the legislation. On Wednesday, Whitehouse also backed the measure.

The resolution will now move the Senate floor for debate. If it passes, it will next move to the House of Representatives for a vote, either in the lame duck session or in the new Congress which will feature a larger proportion of Democrats. If the resolution passes both bodies it would then move to President Trump’s desk where he could either sign or veto it. However, vetoing a bill to empower Congress, a co-equal branch of government, to have a say in U.S. foreign policy and invoke its Article 1 powers under the Constitution would likely spark a major backlash from both chambers. As Sen. Sanders said on Wednesday, “Congress has not authorized the war in Yemen and therefore the war is unconstitutional.”

“Three years ago, the notion of Congress voting to cut off military support for Saudi Arabia would have been politically laughable,” said Paul Kawika Martin, senior director for policy and political affairs at Peace Action. “This successful vote in the Senate is a testament to the collective power of a coalition of peace groups, human rights groups, and grassroots activists across the country making calls, organizing rallies, and meeting with members of Congress to make the case for ending the U.S. role in the war in Yemen.”

Miles Kampf-Lassin, a graduate of New York University’s Gallatin School in Deliberative Democracy and Globalization, is a Web Editor at In These Times. He is a Chicago based writer.

Sarah Lazare is web editor at In These Times. She comes from a background in independent journalism for publications including The Intercept, The Nation, and Tom Dispatch.