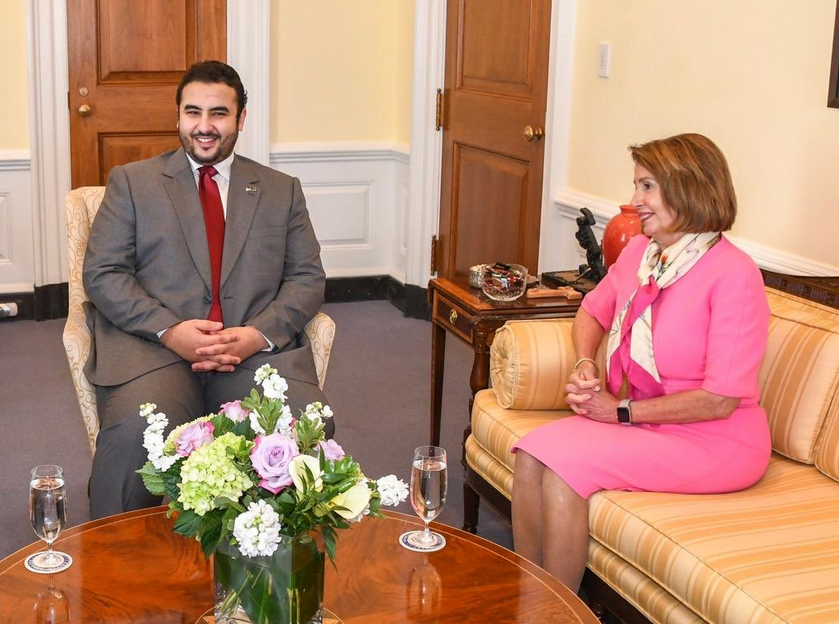 While declining to meet with the Yemeni Alliance Committee, Pelosi has been palling around with the Israeli-American Council and the Saudi ambassador.

Congresswoman Nancy Pelosi (D-Calif.) is refusing to meet with—or respond to—a group of her Yemeni-American constituents who are calling for an immediate end to the U.S.-Saudi War on Yemen. In recent months, however, Pelosi has found the time to speak at the conference of the right-wing Israeli-American Council and meet with the Saudi ambassador (one day after journalist Jamal Khashoggi went missing).

The contrast raises concerns about the priorities of Pelosi, historically hawkish on foreign policy, in a political climate where an end to the U.S.-Saudi war in Yemen is finally within reach. The Senate overwhelmingly voted in late November to advance a War Powers Resolution designed to force a vote on the U.S.-Saudi war and ultimately shut down U.S. participation. The resolution, due to a carve-out, would not prevent the brutalities of the ongoing U.S. drone war in Yemen allegedly targeting Al Qaeda, but nonetheless constitutes the most promising effort yet to end the large-scale atrocities of the U.S.-Saudi War.

A similar effort is playing out in the House, with the most recent iteration, HConRes142, introduced by Rep. Ro Khanna (D-Calif.) on November 29. Now that it is politically safe to do so, Pelosi—who will likely be the next speaker of the House—has vocalized her support for the House resolution. She has not, however, transformed her words into action by publicly committing to whipping the caucus on the new measure, making sure the House moves urgently to end the U.S.-Saudi war.

On November 15, the Yemeni Alliance Committee, a group of Yemeni-American organizers that initially formed to oppose Trump’s Muslim ban, many of whom live in Pelosi’s district, requested a sit-down meeting with Pelosi to discuss the War Powers Resolution. Yet Jehan Hakim, the group’s director, said Pelosi—who, at that point, had not yet endorsed the War Powers Resolution—did not respond to the group’s emails or phone calls. “I'm her constituent, and she has an obligation and duty to sit down with me and our members,” Hakim tells In These Times.

When the Congresswoman didn’t get back, the group decided to stage a protest outside of her San Francisco office on November 20, with one sign declaring, “14m Yemenis face famine while Congress feasts”—a reference to the Thanksgiving holiday. In the midst of the demonstration, the group was informed by Pelosi’s staff that, after years of inaction, the minority leader will support the War Powers Resolution. “This was people power,” Hakim says, a sign of “Pelosi and others realizing how much support ending the war on Yemen was gaining.”

Yet Hakim says that Pelosi still has not agreed to meet with the Yemeni Alliance Committee, a particular concern for the organization given that any future House effort to end the war will likely require urgent action to not just endorse the resolution but fight for it. HConRes138—a similar version of the resolution—was blocked in the House on November 14 after it was folded into a rules measure related to the debate over whether grey wolves should be removed from the list of endangered species. At least two of the Democrats who voted to stymie the resolution later said they did not realize they were doing so, raising questions about whether Pelosi, or Democratic whip Stony Hoyer, were putting muscle behind turning out votes to hasten the end of the war. (Pelosi’s office did not respond to multiple requests for comment from In These Times.)

Pelosi has not responded to the Yemeni Alliance Committee’s multiple queries. In contrast, the staff of Rep. Barbara Lee (D-Calif.) met with the organization December 4.

Yet, one day after Lee met with the Yemeni-American group, Pelosi was a featured presenter at the conference of the Israeli-American Council (IAC), a fiercely pro-Israel lobby shop that is intended as the right-wing alternative to the already right-wing AIPAC. Funded in part by Trump patron Sheldon Adelson, the IAC featured numerous speakers who fear-mongered about “Iranian proxies,” a key—and misleading—talking point used to build support for the U.S.-Saudi War on Yemen.

Pelosi showed her deference to another militaristic U.S. ally October 3, when she met with Saudi Ambassador Khalid bin Salman, one day after Khashoggi was last seen on security footage entering the Saudi consulate in Turkey, where he was almost certainly murdered and dismembered. Just before the Khashoggi scandal broke, the Saudi embassy championed the meeting on Twitter, declaring, “HRH Ambassador Prince @kbsalsaud had an excellent discussion with Democratic leader @NancyPelosi about the historical Saudi-US ties and regional and global developments.” There was no mention, of course, of the 50,000 Yemenis killed by the U.S.-Saudi war over the past three-and-a-half years.

She has also repeatedly vocalized her support for the Mojahedin-e Khalq (MEK), alongside John Bolton, Rudy Giuliani and Newt Gingrich. With virtually no legitimacy within Iran, the MEK is a favorite among neocons because it aggressively lobbies for U.S. military confrontation with Iran, and arguing that its head, Maryam Rajavi, is the rightful leader of Iran. The organization, which supports the U.S.-Saudi war in Yemen, has been described as a cult. According to a Human Rights Watch investigation from 2005, members reported “abuses ranging from detention and persecution of ordinary members wishing to leave the organization, to lengthy solitary confinements, severe beatings and torture of dissident members.” As recently as July, when the MEK held a conference in Paris, Pelosi sent a video message conveying her “warm regards.”

Pelosi’s scheduling commitments reflect her role in advocating for disastrous U.S. military interventions, from Afghanistan to Libya. But her constituents, nonetheless, are holding out hope that, with public pressure, she will actively support efforts to end the ongoing U.S.-Saudi War. While the Trump administration claimed November 9 that the United States has stopped assisting with mid-air refueling of bomber aircrafts used in the war, there has been insufficient evidence to prove this is the case, and the decision can be reversed at any time. Meanwhile, the Saudi-led war continues to take civilian lives, as the Trump administration pledges fealty to the Saudi monarchy.

“This March 2019, the  war will go into its fourth year,” says Hakim. “Yemen was declared by the UN as the world's worst humanitarian crisis in decades. Yemen is on the brink of starvation and famine, and over 14 million Yemenis are at risk of starvation. These numbers are staggering and will only continue to grow unless the U.S. puts a stop to this aggression.”