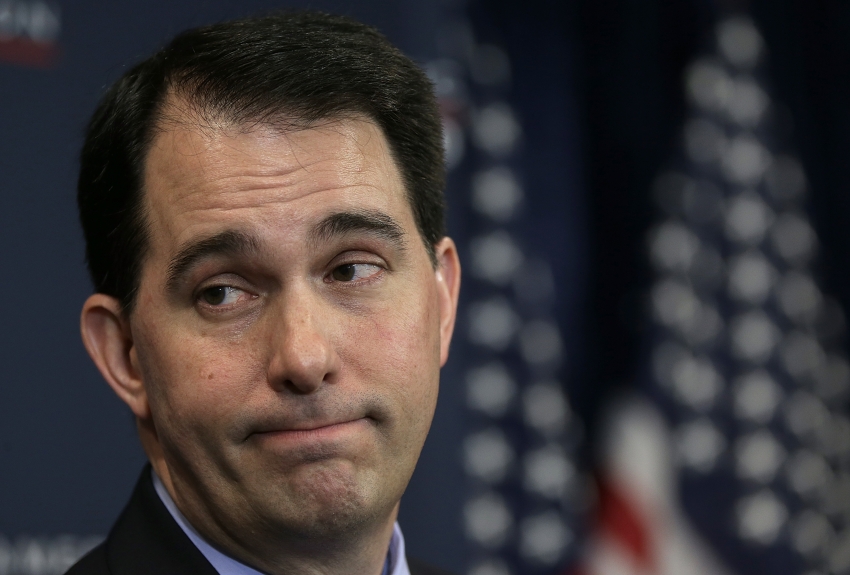 Scott Walker and the GOP have made one thing clear: they are sore losers. (Win McNamee/Getty Images)

After Losing, Wisconsin Republicans Are Trying to Subvert Democracy. They Will Fail.

Scott Walker’s time in office is ending as it began—with an attack on voting rights. But it will only backfire on the GOP.

The GOP attack on early voting stands out as especially egregious because it exposes both a contempt for voters as well as the law.

The final act of Wisconsin Gov. Scott Walker’s quarter-century in public office opened with state Republicans suffering massive defeats in the midterm elections, losing every statewide office on the ballot.

The verdict of the voters was clear, as was the Republican response. On November 6, Wisconsinites said that they wanted change, voting Democratic up and down the ballot. Just days later, meanwhile, the GOP sent a clear message back that the Republican Party doesn’t respect the will of the voters.

In the waning days of their complete control of state government, Republicans convened an “extraordinary legislative session” packed with sweeping measures to undermine the results of elections which they lost—and to interfere with the orderly transfer of power.

The GOP attack on early voting stands out as especially egregious because it exposes both a contempt for voters as well as the law.

In November, over 2.67 million voters cast ballots in Wisconsin—a record turnout for a midterm election. The historic participation was driven in part by the success of early voting. Roughly one of every five ballots cast was done early or absentee.

Communities began offering early voting up to six weeks before the election, on the weekends and in the evenings and in satellite locations like public libraries and community centers.

In response to the results, the Republicans in control of the state legislature adopted legislation to limit the early vote to the two weeks prior to the election. The request for this early voting crackdown was made by Assembly Republican leader Robin Vos’ office a mere eight days after the election, according to drafting records reviewed by One Wisconsin Now.

This isn’t the first time Republicans made such an attempt to rig the rules on voting. And last time, their actions were found by a federal judge to be unconstitutional.

A federal court ruling in the 2016 voting rights case One Wisconsin Institute, et. al. v. Thomsen, et. al. struck down restrictions on the hours and days of early voting imposed after 2011 by Wisconsin Republicans, claiming the constraints were racially-motivated.

In his decision, federal Judge James Peterson found, “Wisconsin’s restrictions on the hours for in-person absentee voting have had a disparate effect on African Americans and Latinos. The court also finds that the legislature’s justification for these restrictions was meager, and that the intent was to secure partisan advantage.”

Attorney Bruce Spiva, who was on the legal team that argued the case, noted the legislature and its Republican leaders could run afoul of the court ruling if they follow through with a new effort to limit early voting.

The display of disrespect to voters and the judiciary is all the more galling because legislators passed the voting restrictions knowing full well what they were doing. The analysis provided to the legislature ahead of the vote by the nonpartisan Legislative Fiscal Bureau specifically noted that the decision in One Wisconsin Institute et. al. v. Thomsen et. al. held the previous GOP limits imposed on days and times of early voting were unconstitutional.

Robin Vos and his fellow Republicans are playing with legal fire as they continue their attempts to rig the rules on voting to give themselves an unfair advantage. Voters have stated loud and clear they’ve had enough of this division by electing Democrat Tony Evers as governor and rejecting Republican rule.

Democracy exists only as long as elected officials do not put themselves above the law.

As the curtain falls on Scott Walker’s governorship, the final act closes much like the Walker saga started, with Republican attacks on the rights of working people—including the sacred right to vote.

Walker’s tale may be finished, but the fight to protect democracy will continue. And when it comes to protecting the right to vote in the state of Wisconsin, we, the people, will write the final chapter.