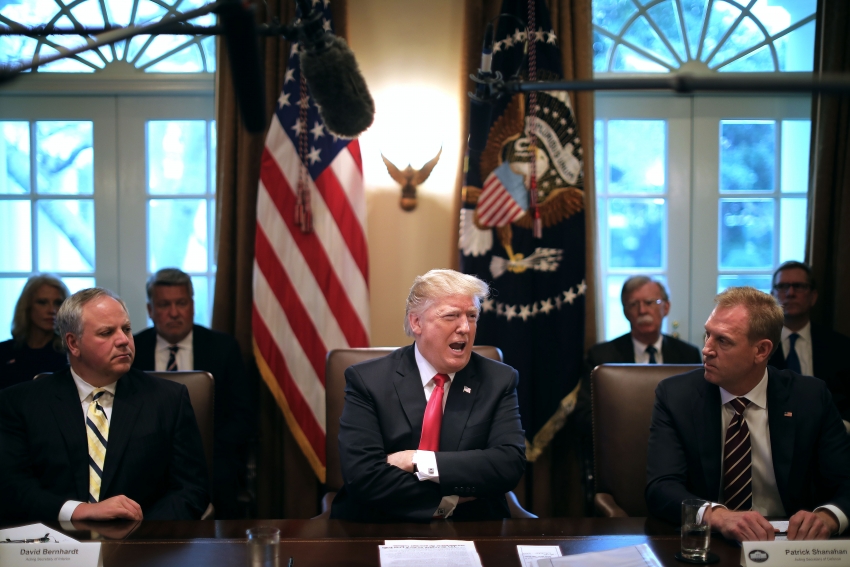 Workers across the country are facing furloughs and struggling to make ends meet. (Photo by Chip Somodevilla/Getty Images)

The shutdown’s impact on the poor is about to get a lot worse.

“I feel like sending Trump my bills so he can pay them for me.”

As the government shutdown drags on past the three-week mark with no clear end in sight, the crisis continues to impact federal employees. From Transportation Safety Administration agents to national park service staff, workers across the country are facing furloughs and struggling to make ends meet while elected officials remain at loggerheads over the federal budget and President Trump’s insistence on more funding for a border wall.

A recent Washington Post report documented how tough the shutdown has been on small towns and cities across the United States, where local economies often rely heavily on the incomes and purchasing power of federal employees. One city profiled is Ogden, Utah where thousands of residents work for agencies such as the IRS or the U.S. Forest Service and, as a result, have suddenly found themselves without an income, at least temporarily.

While some of these workers make far less than the “average $85,000 for government employees,” according to the Washington Post, “those paychecks drive local economies.” This means local businesses are also struggling during the shutdown, as their customer base has dried up.

Theresa Jojola works for the federal Office of the Special Trustee for American Indians in Albuquerque, New Mexico. Although she works full-time as an office support person, answering phones and otherwise helping the office run smoothly, she lives paycheck to paycheck. Jojola also says she has recently been dealing with car issues and a death in the family—situations that have drained her financial reserves.

“I am kind of having a difficult time financially,” Jojola tells In These Times. She often supplements her income by selling traditional Native clothing that she makes, but, since most people in her community are also government employees, she believes that this will not be a viable option. Instead, she says, if the shutdown continues, her bills probably will not get paid.

Jojola is not alone. Many of the nation’s most vulnerable citizens, including children, the elderly, and people who live in poverty, are also likely to pay a steep price during this shutdown, the third one to occur during Trump’s time in office.

Take SNAP benefits. SNAP, or Supplemental Nutrition Assistance Program, provides food stamps to families who live at or below 130 percent of the poverty level, as defined by the federal government. As the shutdown drags on, those benefits are in danger of being canceled for the approximately 43 million Americans who rely on them. SNAP is funded by the Department of Agriculture, which is part of the 25 percent of the government directly impacted by the shutdown.

SNAP is funded through January, but the Department of Agriculture “does not have sufficient funds to cover all of February,” according to Rolling Stone. As of January 7, callers to the program’s 1-800 number will simply hear this message: “We are currently not operational due to the lapse in appropriations which has resulted in the shutdown of many federal government agencies.”

Over half of all families with children who receive SNAP benefits represent the working poor, as they are employed but do not earn enough to cover basic living expenses. Many of these families also include elderly and disabled people, according to research from the nonpartisan Center on Budget and Policy Priorities.

The government shutdown also has the potential to put the brakes on rental assistance provided by the United States Department of Housing and Urban Development, or HUD. A January 2019 update posted to the website of the National Low Income Housing Coalition, a housing rights advocacy group, indicates that HUD officials are scrambling to figure out how to honor contracts between the agency and the landlords that manage affordable housing units across the country—a situation that may put “low-income tenants at risk.”

Rural communities, as well as the elderly and disabled, are also at risk, with no indication yet as to whether or not the government will be able to continue “paying rental assistance or vouchers for low- and very low-income tenants” while the shutdown drags on.

Visitors to the HUD website will see a bright red banner at the top of the screen, carrying this alert: “Due to the lapse in Congressional Appropriations for Fiscal Year 2019, the U.S. Department of Housing and Urban Development (HUD) is closed.” Nationally, over 4 million low income people count on HUD for help with housing costs.

In response to concerns about missed housing payments, the federal Office of Personnel Management has reportedly advised workers to either ask for a reduction in rent or try bartering with their landlords. Other key functions of government that benefit the poor and vulnerable, including Social Security and Medicare, will remain in operation as they have already received funding allocations for this year.

The shutdown is now one of the longest in U.S. history, at three weeks and counting. President Trump has repeatedly attempted to frame the shutdown as a sacrifice willingly made by employees who support his hardline push for more funding for a border wall. That might be a tough sell for the millions of Americans—including the working poor—who depend on help from the federal government to keep food on the table and a roof over their heads.

For her part, Jojola wants nothing to do with the border wall. Instead, she says, “I feel like sending Trump my bills so he can pay them for me.”