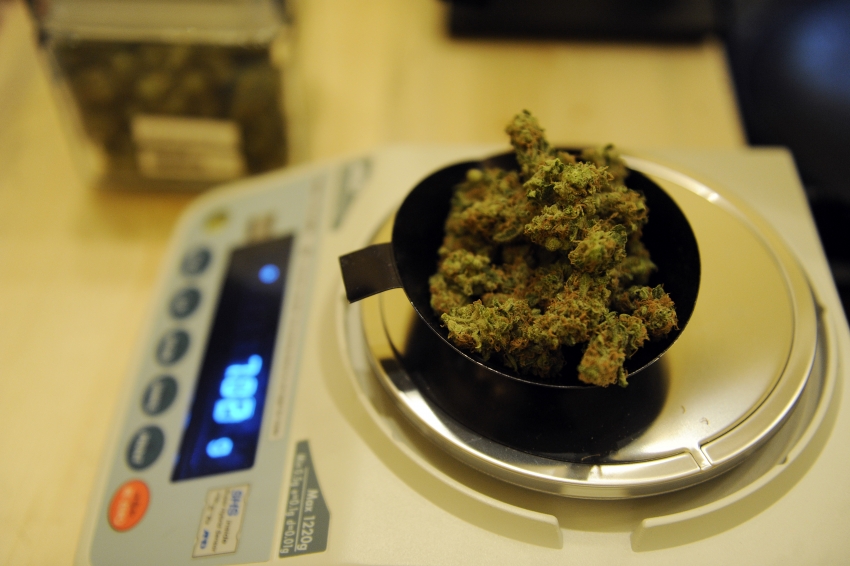 Racial justice should be priority number one in weed legalization. (Photo by Seth McConnell/The Denver Post via Getty Images)

Legal Weed Is Great, But Black and Brown Communities Can’t Be Left Behind

Marijuana legalization must bring both equity and justice for those most impacted by the War on Drugs.

Racial equity in cannabis legislation cannot simply come as lip service from politicians, it has to be a robust policy that’s centered on the indemnity and inclusion of the communities who have suffered while marijuana was illegal.

In March 2017, Illinois State Rep. Kelly Cassidy and Sen. Heather Steans began co-drafting the Tax & Regulate Cannabis like Alcohol bill. In the nearly two years since, Chicago NORML, a local chapter of the National Organization for the Reform of Marijuana Laws, has encouraged Illinois legislators to prioritize social equity and criminal justice in the final version of the bill.

In a January 2018 speech to industry stakeholders, then-candidate and now Illinois governor-elect JB Pritzker promised to “intentionally include black and brown entrepreneurs” in managing legal marijuana businesses in the state in order to address “historically systemic racism.”

Now, outgoing Chicago Mayor Rahm Emanuel has announced that recreational marijuana should be legalized—and that the resulting revenue should go toward fixing the city’s pensions crisis.

While it’s critically important both for Black and Brown entrepreneurs to gain equal access to the burgeoning market and to address pension shortfalls, using marijuana revenue to fill budget gaps and backlogged debt does a grave disservice to the decades of inequity faced by communities of color as a result of the War on Drugs. Illinois lawmakers are facing a historic opportunity to center equity as they craft marijuana legalization legislation, and community groups are mobilizing to make sure that’s precisely what they do.

When organizers with the BlackRoots Alliance, a coalition of community organizations centered on supporting Black leadership and building independent political power, started knocking on doors about this issue, a majority of people they talked to said they felt left out of the discussion around marijuana legalization.

While our elected officials may want to fast track this marijuana legislation to fix the pension crisis, Black communities—which have been disproportionately impacted by cannabis arrests and discriminatory sentencing practices nationally at a rate of 4:1 over white populations (7:1 in Cook County)—demand more from our public servants. We need legalization initiatives that address criminal justice reform and disparities in the cannabis marketplace while also reversing and repairing the most egregious effects of the War on Drugs upon communities of color.

The annual tax revenue resulting from recreational cannabis in Illinois is projected to reach into the hundreds of millions of dollars. The communities hardest hit by poverty and the effects of the War on Drugs should receive a significant portion of that revenue, and they should get it first. Revenue from recreational marijuana sales should be re-invested into restorative justice programs and be used to fund public schools in low-income areas, jobs programs and a variety of equitable on-ramps into the new industry ear-marked for returning citizens and people from low-income communities. Any legalization bill should also provide immediate expungements or resentencing of marijuana-related cases.

Since mid-2018, members of the BlackRoots Alliance and Chicago NORML have been talking to voters in Black and Brown communities as well as thousands of people who have signed petitions, and these residents are clear that they want the recreational marijuana tax revenue reinvested in their communities.

This February, Chicagoans in a number of these communities may have the opportunity to weigh in on how they feel such revenue should be used at the ballot. The BlackRoots Alliance and Chicago NORML delivered signatures in November 2018 to the Chicago Board of Elections demanding that the February 2019 municipal election ballot include a referendum question asking voters in wards and precincts across Englewood, Garfield Park and Austin—neighborhoods of color—if they would like to see recreational marijuana tax revenue reinvested in their communities. Specifically, the petition asks the elections board to put the following question on the ballot:

In the event that the use and sale of recreational marijuana is legalized in the State of Illinois, should the City of Chicago appropriate tax revenue to fund neighborhood reinvestment in low income, disenfranchised communities hit hard by the war on drugs?

If lawmakers are serious about making sure the cannabis industry in Illinois is equitable and fair, they must include earmarks on the revenue from marijuana sales for the communities that have been hit the hardest by social inequities related to marijuana prohibition.

Recognizing the short window of time available to shape the cannabis industry in Illinois, Chicago NORML and BlackRoots Alliance plan to bring the issues of racial equity and restorative justice in the cannabis industry to the forefront of the public’s attention. State legislators have recognized the imbalance of access for minorities in the medical cannabis program and vowed to correct them. But as they consider options to address the lack of equity and minority ownership in the proposed recreational bill, it’s important that all aspects of the legislation and its associated revenue address these challenges.

It’s encouraging to hear elected officials talking about “when” we legalize marijuana as opposed to “if”—but the discourse must shift to “how” we are going to use the money associated with legalization to make our state stronger and life better for our most at-risk communities.

To become the nation’s cannabis “gold standard” we must also be serious about taking adequate time to develop the social equity components that will ensure those who have historically carried the weight of the cannabis industry can come out of the black market and have a fair shot at benefiting from the success of legalized recreational marijuana.

Racial equity in cannabis legislation cannot simply come as lip service from politicians, it has to be a robust policy that’s centered on the indemnity and inclusion of the communities who have suffered while marijuana was illegal. Plain and simple, this equity looks like people getting out of jail, expungements of records, people from low-income communities gaining prioritized access to the market and revenue going towards high-impact community programs that help clear hurdles to prosperity for low-income communities.

Legalizing marijuana is not just another revenue stream, because its prohibition has streamed directly from racist policies. But Illinois now has the opportunity to get it right and turn this moment into a stream of equity and justice, setting us apart as a truly progressive state.

Give Every Child a $1,000 Trust Account and the Next Crisis Won’t Be So Bad