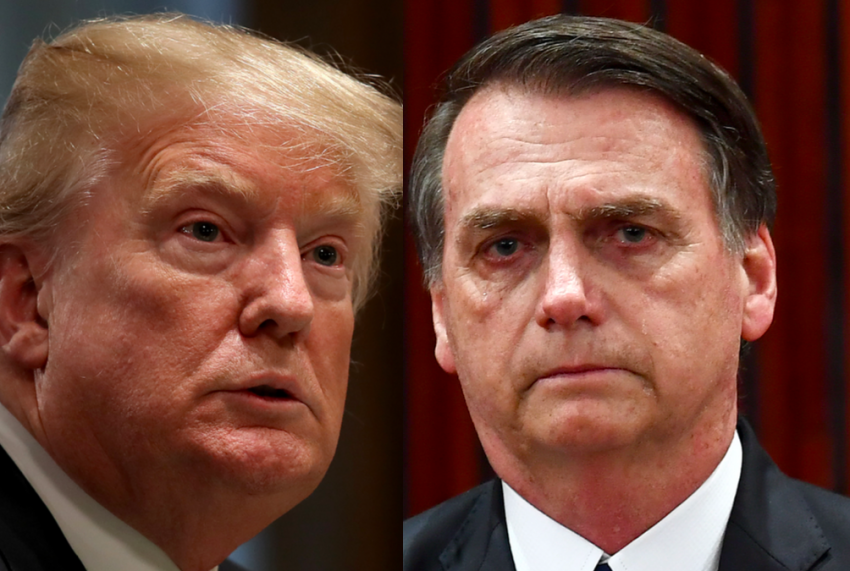 The United States and Brazil are coordinating with right-wing governments across Latin America to declare Juan Guaidó president.

The call to replace Maduro has become a rallying cry for the Latin American right.

Venezuela is facing its most serious political crisis in years. The United States and Brazil—both headed by far-right presidents—are helping to push the country to the brink.

On Wednesday, the head of Venezuela’s National Assembly, Juan Guaidó, declared himself the country’s interim president before thousands of supporters. In a clear sign of coordinated action, U.S. president Donald Trump quickly recognized Guaidó as Venezuela’s legitimate leader, along with Brazil, Colombia, Chile, Peru, Argentina and most of the Lima Group, a multilateral body that includes Canada and a dozen largely conservative Latin American countries.

The problem is that Venezuela already has a president. Nicolas Maduro was sworn in for a second term earlier this month, after winning a reelection vote last year. Because of low voter turnout and an opposition boycott, the Organization of American States (OAS) and the United States called the last election invalid.

After the United States recognized Guaidó on Wednesday, Maduro broke off diplomatic relations and ordered the withdrawal of all U.S. personnel within 72 hours. Guaidó called for them to remain. In an unprecedented move, the United States is set to defy the order and keep the embassy open.

“The United States will take appropriate actions to hold accountable anyone who endangers the safety and security of our mission and its personnel,” U.S. Secretary of State Mike Pompeo told CNN. The Trump administration has refused to rule out military intervention, and announced Wednesday that “all options are on the table.”

The level of the current political crisis in Venezuela would have been hard to imagine only a few years ago during the Pink Tide era, when regional blocs of progressive governments promised to back each country’s self-determination against coup threats and U.S. destabilization.

Brazil’s left-wing Workers Party governments — which governed from 2003 through 2016 —  backed the region’s progressive left and vocally supported Venezuela, among other radical countries. Right-wing congresses still pushed through U.S.-backed coups in Honduras, Paraguay and Brazil. But the threat of U.S. military intervention in the region was largely off the table. Not anymore.

Since the 2016 impeachment of Brazil’s president Dilma Rousseff, in a move that was considered by many to be a congressional coup, U.S.-Brazilian relations have warmed. Under Brazil’s new president, far-right former military captain Jair Bolsonaro, the ties have grown even tighter. Trump and Bolsonaro have traded accolades over Twitter. Trump’s top security official John Bolton met with Bolsonaro at his home in Rio de Janeiro in November, where they discussed Venezuela, among other things. U.S. Secretary of State Mike Pompeo attended Bolsonaro’s inauguration in Brasilia.

The call to replace Maduro has become a rallying cry for the Latin American right. When Argentine president Mauricio Macri visited Bolsonaro last week, Venezuela was high on the agenda, just after discussions of their commercial ties.

More than 10 days before Guaidó declared himself president, the Brazilian government under Bolsonaro had already issued a statement recognizing Guaidó as Venezuela’s legitimate ruler. Guaidó spoke with Bolsonaro’s son Eduardo, himself a congressional representative, and thanked them for the support.

Bolsonaro has multiple reasons to want to push hard against Maduro. Like Trump, the new Brazilian president stands to gain support for the harsh stance on Venezuela. As anachronistic as it may sound — 30 years after the fall of the Berlin Wall — Bolsonaro waged a substantial portion of his electoral campaign last year on the fight against communism. “Today is the day that the people begin to free themselves from socialism,” Bolsonaro said during his inaugural address on January 1.

Bolsonaro pinned the communist threat on Brazil’s Workers Party, which he and his supporters blame for everything from corruption to the financial crisis and even youth pornography. But for Bolsonaro, Venezuela is the kingpin of evil — a specter he prophesied would happen in Brazil, if the left returned to power.

U.S. Security Official John Bolton took it yet to another level, elevating Venezuela, along with Cuba and Nicaragua, to members of what he called called the “Troika of Tyranny.” Bolton said in early November, “This Troika of Tyranny, this triangle of terror stretching from Havana to Caracas to Managua, is the cause of immense human suffering, the impetus of enormous regional instability, and the genesis of a sordid cradle of communism in the Western Hemisphere.”

Under Bolsonaro, Brazil is willing to do whatever necessary to back the United States and strengthen its hand in the region. The two countries have even discussed the possibility of a U.S. base on Brazilian soil, although Brazil’s military has long been reluctant to hand over Brazilian sovereignty to the United States or any foreign country.

Brazil is a powerful country in the region: Its military, while dwarfed by the United States, is by far the largest in Latin America, with over 330,000 active military personnel, and more than 1.6 million individuals in the reserve.

Brazilian Vice President Hamilton Mourão, himself a former army general, told the press on Wednesday that Brazil would not participate in any future military intervention in Venezuela. Bolsonaro, however, has previously said that nothing was off the table—and so has the United States.

For several months, Trump has been floating the idea of a possible military intervention. Now, with most of the countries in the region closing ranks behind it, and the Guaidó-forced political crisis in full swing, the United States, may be looking for an excuse to act.

This is not the first time the United States has tried to influence Venezuelan politics. For the last 20 years — since the election of Hugo Chavez in 1998 — the United States has backed many opposition attempts to overthrow the Venezuelan government, be it by supporting the oil lockout, the opposition’s boycotting of elections and the 2002 coup. The U.S. State Department has propped up numerous opposition groups with millions of dollars, through the National Endowment for Democracy and other U.S. government-funded organizations.

There is much at stake with this latest coup attempt. Venezuela is home to the largest oil reserves in the world. Though production is down from earlier years, the South American country still produces roughly 1.4 million barrels of crude oil a day, shipping more than a third of it to refineries in the United States.

Venezuela has long funneled oil revenues into social programs for the country’s poor, lifting millions from poverty and raising standards of living. It led the charge to reorganize OPEC, unite the Latin American left and stand up to the United States.

“Venezuela is not just an outlier in political terms in the region now, but it is a country that represents a real threat to the right regionally, to the extent that if they recover economically, if oil prices go up again, it can become once again a regional powerhouse as it was under Chavez,” Alex Main, from the Center for Economic and Policy Research, said on Wednesday. “So, I think what’s going on, in part, is a real fear that Venezuela could make a comeback, so to speak.”

Of course, Venezuela is, and has been, in turmoil for many years. Inflation is through the roof, many food items are scarce and products hard to find. The crisis has led to a mass exodus of Venezuelans, with thousands attempting to leave across borders to neighboring countries. The Maduro government has not been effective at combatting the multiple layers of problems. But it has also faced tough U.S. sanctions and an internal economic war that has impeded its ability to function.

Guaidó’s self-proclamation, in coordination with U.S.-backed international interests, is pushing the country to the edge—and dangerously fueling tensions. The high command of Venezuela’s military reaffirmed its support for Maduro as the country’s legitimate president on Thursday. Russia, China, Iran, Mexico, Uruguay and Cuba have all recognized Maduro as Venezuelan president. In particular, on Thursday, Russia warned the United States against intervening in Venezuela, saying it would trigger a “catastrophe.”

As many have observed, decades of bloody invasions and U.S.-backed coups have taught us that regime change always ends badly. In the case of Venezuela, it could lead to civil war and a complete destabilization of the region.