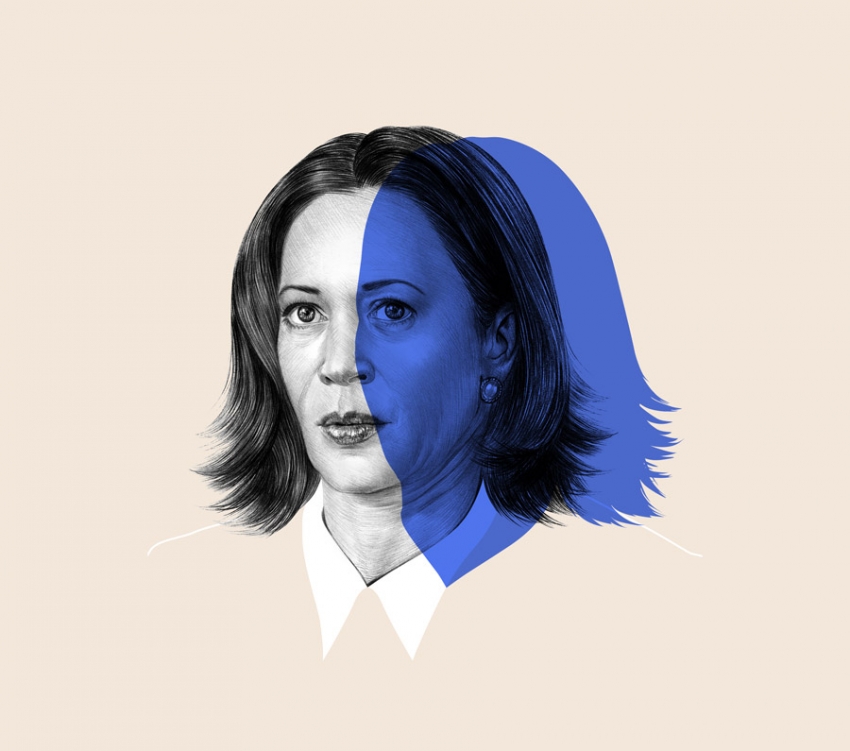 In her memoir The Truths We Uphold, presidential hopeful Kamala Harris casts herself as a progressive prosecutor, but it’s a tough case to make. (Illustration by Aistė Stancikaitė)

The sad reality is that Harris is in step with a troubling Washington consensus on criminal justice reform.

Sen. Kamala Harris (D-Calif.) released a new autobiography in January, The Truths We Hold: An American Journey, to coincide with her presidential bid. It opens with an awestruck account of her first day as a summer intern with the Alameda County District Attorney's Office. That experience during her final year of law school confirmed her desire to be a prosecutor and propelled her successful campaigns to become San Francisco’s district attorney and then California’s attorney general.

Harris writes of striving to be a “progressive prosecutor,” but her vision is comprised of little more than gauzy invocations to wield the powers of her office “with a sense of fairness, perspective and experience,” to “hold serious criminals accountable,” to foster “safe communities” through crime prevention, and to run a “professional operation.” Harris frequently mentions her willingness to fight the good fight, to bring it on, but the battlefield she portrays is largely devoid of specific political interests, trade-offs and opponents (except for primordial sins such as racism, sexism, homophobia and, of course, the bogeyman of President Donald Trump).

When it comes to policy, Harris sits foursquare in the Washington consensus that congealed around the much-heralded First Step Act of December 2018. Instead of reining in the carceral state, that consensus involves trimming around its edges at best and bolstering its long-term viability at worst.

Now coming under national scrutiny with her presidential bid, Harris’s poor record has been hiding in plain sight for years in California. That record, once one looks past her multicultural coming of age story and her attempts at soaring rhetoric, is risk-adverse and mainstream—much like Barack Obama’s at a comparable point in his political career. She has spent little political capital to curb mass incarceration and, like Obama, her biggest political risks have involved the timing of her electoral decisions to challenge establishment politicians rather than wait her turn to run for higher office.

When Harris was elected district attorney of San Francisco in 2003, the problem of mass incarceration was invisible to the wider public. To her credit, she challenged the idea that prosecutors should “incarcerat[e] people for as long as possible, no matter the crime, no matter how much it costs to incarcerate them, and despite the documented fact that our current prison system rarely prevents offenders from committing new crimes when they come back out.” Early in her tenure, she took a courageous stand not to seek the death penalty in the case of a man accused of killing a police officer, and her office was also less likely than many other jurisdictions to deploy California's draconian three-strikes law.

These are early bright spots in what is otherwise a troubling record. A judge excoriated her DA’s office for its “levels of indifference” to defendants’ constitutional rights in its failure to disclose information about a scandal in the crime lab's drug analysis unit that led to the dismissal of 700 cases. A technician had been skimming cocaine and tampering with evidence.

As attorney general, Harris successfully championed legislation to criminalize truancy and punish parents with fines and incarceration. She also sided with Gov. Jerry Brown to stymie implementation of Brown v. Plata, the most consequential prisoners’ rights decision in more than a generation, by repeatedly returning the case to the lower courts. The U.S. Supreme Court had declared that California's grossly overcrowded prisons were unconstitutional and ordered the state to reduce its inmate population. Andrew Cohen of the Brennan Center for Justice characterized these attempts to “weasel out” of the Supreme Court’s ruling as “nothing short of contemptuous.”

In The Truths We Hold, Harris lauds implicit bias training as her weapon of choice to reduce police shootings of people of color. There are much more effective and proven measures, like stricter use-of-force regulations for police departments and mandated independent investigations of shootings—but they are stridently opposed by many police officers and their unions, and Harris has not forcefully advocated them.

Harris has taken similarly troubling positions on many other key criminal justice issues, including the use of solitary confinement, civil asset forfeitures, the criminalization of sex work, and punitive residency and other measures leveled on people convicted of sex offenses. She resisted key efforts to moderate California’s three-strikes law. Harris periodically has touted herself as a fierce opponent of the capital punishment, but as attorney general, she appealed a federal judge's ruling that the state's enforcement of the death penalty was unconstitutional. She continued to come down on the side of the death penalty as the case made its way through the federal courts and took no public position on a 2012 ballot measure to repeal capital punishment in California.

It’s easy to pile on Harris as a would-be reformer who is anything but. The sad reality is that she is in step with a troubling Washington consensus on criminal justice reform. If there were any doubts, just look at the strange career of the First Step Act, which Trump signed into law in December 2018 and CNN commentator Van Jones hailed as a “Christmas miracle.”

The final version of the bill included some modest sentencing reforms that will likely result in the early release of a few thousand of the federal system's 180,000 inmates; it will not affect the release dates of the 2 million people incarcerated in state and local jails.  The legislation also promises to expand the use of compassionate release for gravely ill federal prisoners and improve the conditions of confinement for other federal prisoners by, among other things, prohibiting the shackling of pregnant women and the solitary confinement of juveniles.

Leaving aside the sentencing reforms, the Federal Bureau of Prisons already had the broad authority to implement most of these changes through its administrative powers. Indeed, the shackling of pregnant women has been prohibited in the federal system for about a decade.

The First Step Act was first introduced by Reps. Hakeem Jeffries (D-N.Y.), Bob Goodlatte (R-Va.) and Karen Bass (D-Calif.) in May 2018 and received 16 bipartisan cosponsors, including Keith Ellison (D-Minn.) and Tulsi Gabbard (D-Hawaii). The Leadership Conference on Civil and Human Rights wrote a scorching response, signed by dozens of criminal justice reform and civil rights organizations, including the ACLU, urging legislators to vote no due to several “grave concerns,” including the act’s centerpiece—a “risk and needs assessment” algorithm that risked “embedding deep racial and class bias” into early-release decisions. They also criticized the bill for fostering the privatization of the criminal justice system and for failing to appropriate any funding for implementation.

Another concern was the bill's focus on providing programming and early release measures targeted at the “non, non, nons”—people convicted of nonviolent, nonserious and non-sexual offenses. The legislation excludes a wide swath of people in federal prison who may have committed serious crimes but who no longer pose serious threats to public safety. There are dozens of exclusions, including people convicted of computer fraud, failure to register as a sex offender, and many categories of assault and possession of a firearm.

Harris and Sen. Cory Booker initially joined the opposition to the bill. In November 2018, however, Booker helped reintroduce a revised version that included new (modest) sentencing reforms. The Leadership Conference and many other advocacy groups (including the ACLU) did an about-face, endorsing the revised legislation even though most of their “grave concerns” were still unaddressed.

Some major criminal justice reform advocates, including Patrisse Cullors, co-founder of Black Lives Matter, remained outspoken opponents. In a prepared statement, JustLeadershipUSA, a leading advocacy group for formerly incarcerated people, denounced the measure: “We must avoid further situations like the First Step Act and any type of incremental reform that helps the few and sets up harm for the many. We could not endorse this bill because it contains what Michelle Alexander has aptly termed the Newest Jim Crow—harmful technology and an expansion of the carceral state that will disproportionately impact Black and brown people’s freedom.” Vivian D. Nixon, a leading national voice among formerly incarcerated people, said in a statement, “It’s tempting to support this bill on the merits of its effort to improve the conditions of confinement. But these improvements mean little if they come at the expense of freedom for this and future generations.”

The hoopla surrounding the Washington consensus that has brought together Democrats and the ACLU with the Koch brothers on the issue of criminal justice reform is overblown. It has been self-servingly promoted, especially by the Kochs’ political and public policy machine, as the one bright spot in an otherwise dysfunctional capital. As the criminal justice gaze was fixed on this alleged bipartisan miracle, William Barr, a champion of hardline penal policies when he was President George H.W. Bush’s attorney general, was poised to return as President Trump's next attorney general.

The hoopla also draws attention away from the major advances toward reform happening at the local level. A new generation of prosecutors is willing to take on the Fraternal Order of Police and the statewide associations of district attorneys and sheriffs—some of the biggest obstacles to real criminal justice reform. And powerful local coalitions are emerging to make sure that those like Harris, who aspire to be “progressive prosecutors,” do not pull back once they are elected to office.

Marie Gottschalk is a professor of political science at the University of Pennsylvania. Her latest book is Caught: The Prison State and the Lockdown of American Politics.