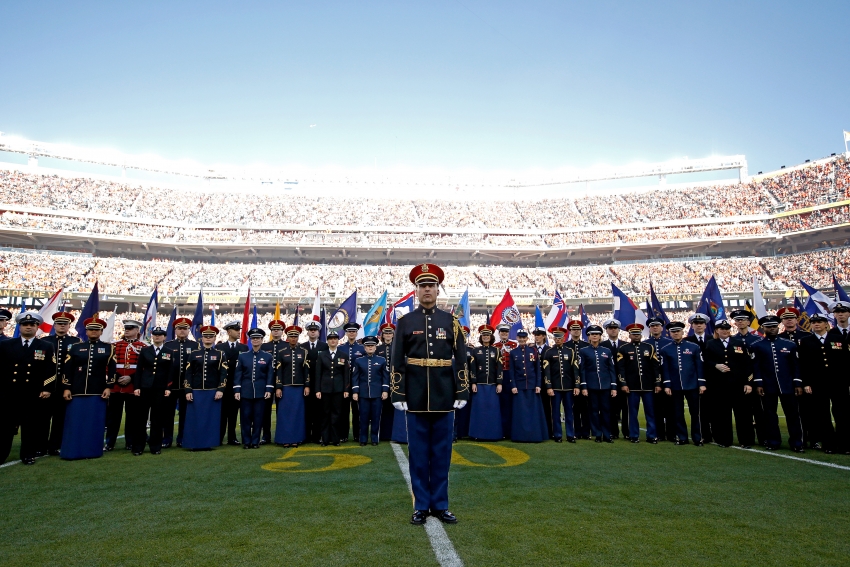 Members of the Armed Forces perform prior to Super Bowl 50 between the Carolina Panthers and Denver Broncos at Levi's Stadium on February 7, 2016 in Santa Clara, California. (Photo by Ezra Shaw/Getty Images)

Does the Super Bowl Feel Too Political? Thank American Militarism.

The staging of professional sports events is deeply political. It’s only when someone breaks character that we notice it.

Make no mistake — even “non-political” celebrations of veterans are deliberately political.

Super Bowl season is like the holidays — a celebration shared by people more accustomed to arguing than sitting down together. As one of the few transpartisan, mass media events left to our tribal culture, the biggest TV night of the year can’t help but channel the political tensions most of us endure all year long.

Meanwhile, advertisers fret that running any ads at all could be read as a statement one way or the other. (Last year, Budweiser faced boycott calls for an ad merely mentioning that one of its founders was an immigrant.)

It’s a normal thing to want a break from arguing. But in a politicized environment, even shutting up is a political act.

In fact, professional football has been deeply politicized for years. Maybe you didn’t notice before Colin Kaepernick took a knee, but the fact that one guy on one knee sparked a national firestorm highlights the politics of the stage he acted on.

It wasn’t until 2009, for example, that NFL players were even required to leave the locker room for the national anthem, much less stand for it.

That year, the Pentagon was gearing up for a major troop surge in the Afghan war, which even 10 years ago was already old, unpopular, and largely forgotten. It needed recruits, and it needed a compliant public.

So where did it look? To sports fans. A Senate investigation revealed that the military dumped tens of millions of dollars into the NFL and other leagues for PR help. This accelerated a post-9/11 trend of increasingly patriotic — and martial — displays at football games.

“Consider the display put on at Super Bowl 50,” recalls writer Stephen Beale for The American Conservative: “A flyover by the Blue Angels fighter jets, and 50 representatives of all military branches singing ‘America the Beautiful’ against a backdrop of a giant flag.”

Some even speculate that the NFL’s national anthem rules were bought by that Pentagon money. Either way, warfighters are now honored at virtually every sporting event. A visitor from elsewhere might wonder what all this has to do with moving a ball around.

Make no mistake — even “non-political” celebrations of veterans are deliberately political. William Astore, a 20-year Air Force vet, has written that the “post-9/11 drive to get an America public to ‘thank’ the troops endlessly for their service in distant conflicts” amounts to “stifling criticism of those wars by linking it to ingratitude.”

Astore quotes the late Norman Mailer, who warned during the Iraq War that “the complete investiture of the flag with mass spectator sports has set up a pre-fascistic atmosphere.” (How prescient that seems now that the president himself sets out to punish political speech on the field.)

It was only in this atmosphere that a simple, silent protest against police brutality and racism could be construed as an attack on “our troops” — as opposed to, say, police brutality or racism. Despite this thoroughly political staging, it was only Kaepernick and his supporters who were attacked for “bringing politics” into football.

The conditioning was so deep that even real-life veterans coming out in support of the quarterback were unable to prevent him from being demonized and blackballed. (In fact, it was veteran Nate Boyer who advised Kaepernick to take a knee in the first place.) Small wonder that rich celebrities and advertisers now have to grapple with it, too.

That’s no comfort to the beleaguered football fan (or their friend who just watches for the commercials). But even if nobody deigns to kneel during the anthem, and even if advertisers and halftime performers play it safe and boring, you aren’t being spared politics. You’re swimming in it.

Somewhere outside that billionaire-owned, taxpayer-funded stadium (hey, that’s political too), your neighbors are living with poverty, racism, and violence. Farther afield, thousands of troops remain mired in countless forgotten battlefields, while innocent people abroad endure another year of war.

Everything we do that affects each other is political — and few acts are more deceptively political than telling the affected people to pipe down.

This article was first published by Inside Sources.