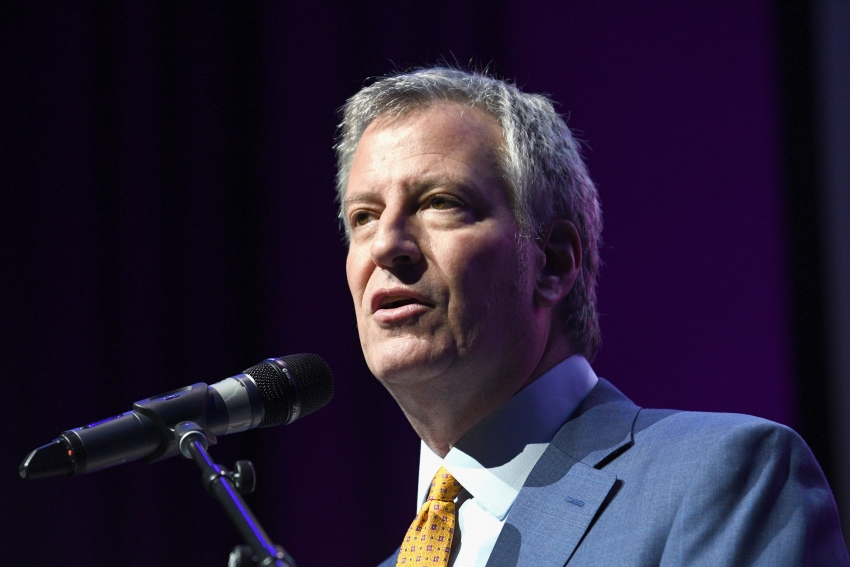 Of Course Undocumented People Should Have Guaranteed Healthcare. NYC Is Making It a Reality.

In early January, New York City Mayor Bill de Blasio announced a new citywide healthcare program he claimed will enshrine universal coverage in the city. “From this moment on in New York City everyone is guaranteed the right to healthcare,” he announced on MSNBC. “We are saying the word ‘guarantee’ because we can make it happen.”

While the plan won’t equate to a Medicare for All policy of the type being pushed on the national level, it nonetheless represents a heartening step forward. “It’s the boldest step that can be taken at the city level,” says Katherine Robbins, Director of the single-payer advocacy coalition Campaign for New York Health. “De Blasio was very clear at the press conference that this proposal is no replacement for single-payer at the state or national level, but it shows there is momentum on this issue.”

De Blasio’s plan also includes healthcare for undocumented city residents—a critical step at a moment the far right has scapegoated immigrants to fire up a racist, xenophobic base.

The plan is two-pronged and geared toward the city’s estimated 600,000 residents currently without health insurance. The roughly half of these residents who qualify for MetroPlus—a managed care plan sold on the state exchanges with a network of public providers—will be targeted for expanded enrollment in that program, which one spokesperson from the mayor’s office dubbed a city-level “public option.” The remaining 300,000 are believed to be undocumented individuals whose immigration status renders them ineligible for most insurance. For them, de Blasio’s plan will strive to connect patients directly with local public providers.

Expanding healthcare access this way is uniquely possible in New York, which boasts the largest city-level public hospital system in the country. While uninsured people can already get care at these facilities without handing over information about their immigration status, such services are neither well coordinated nor publicized. The estimated $100 million budget for NY Care will largely be used to streamline the patient experience, with the mayor’s office promising shorter wait times and an emphasis on on-boarding patients into the system for preventive rather than emergency services, creating a continuity of care for a population that rarely has it.

Few populations are as persistently without health insurance as the undocumented. Their legal status makes it nearly impossible to hold jobs that provide employer-sponsored insurance, which continues to be the primary source of Americans’ health coverage, and programs like Medicaid and Medicare seriously restrict the participation of undocumented adults. Even the Affordable Care Act bars unauthorized immigrants from purchasing policies on the state exchanges, with or without federal subsidies. The result is that coverage rates for undocumented New Yorkers hovers at around 40 percent, a figure representing mostly children and those insured as dependents of legal residents.

Given the undocumented community’s staggering uninsurance rates, incremental measures to expand coverage have long been championed by immigrant advocates. Beyond the obvious good of securing healthcare for people who need it, this serves a practical political purpose. “It makes it easier to deliver on the promise of single-payer if we make incremental steps in the mean-time,” says Claudia Calhoon of the New York Immigration Coalition, which is part of the coalition supporting the New York Health Act—a statewide single-payer bill. “We’re always trying to talk to people about why it’s good for everyone to have insurance, it’s not a zero-sum game.”

Bringing more undocumented people into the system in the short-term will both enlarge the constituency likely to fight to defend those gains while also refuting the right-wing talking point that covering undocumented communities will somehow hobble the American healthcare system.

If the so-called “safety net” hospitals have long been a critical source of care for marginalized people, that role hasn’t necessarily been emphasized by public officials. That the de Blasio administration is outwardly championing healthcare services for undocumented residents is a significant contrast from the rhetoric and policies of President Trump who has made anti-immigration fervor a signature of his political brand.

“In this political climate it’s really important to have pro-immigrant rhetoric from New York State,” Robbins says. “It’s one of the issues that will be used to divide the movement.” This is particularly true given the degree to which an imagined drain on the welfare state is used to stoke xenophobic sentiments, and the demonstrated history of excluding undocumented populations from public insurance programs. Plans like de Blasio’s (and the “Healthy San Francisco” program on which it was modeled) can help set a precedent for immigrant inclusion before these political battles advance at the state or national level.

For now, the impact of the reform on individual lives will depend on the sliding scale pricing mechanism and outreach initiatives, which have yet to be announced. How patients’ ongoing communication with the healthcare system is managed—including cultural competency and clarity—will be key.

“Getting the word out and understanding how it works will be really important,” Calhoon says. “In general, people are really excited.”