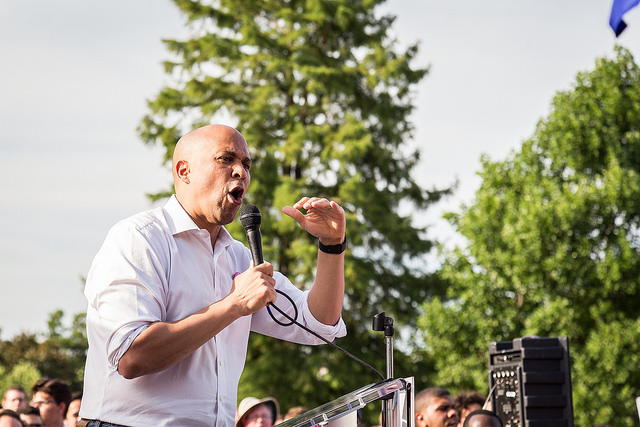 Lots of Presidential Candidates Talk a Good Talk. Look at Their Records Instead.

It’s the only way to tell who actually means what they say.

Have they spent their lives fighting for the causes they say they believe in? Or do they seem to shift positions depending on which way they perceive the political wind to be blowing?

As Democratic Party voters have moved left, so have the prospective 2020 Democratic presidential nominees. Sen. Cory Booker (D-N.J.), who once criticized Barack Obama for being too harsh on private equity firms, is now proposing massive new taxes on inheritance and capital gains in order to finance a large-scale reduction in wealth inequality. Sen. Kirsten Gillibrand (D-N.Y.) confesses she is “embarrassed” by her past fearmongering about immigrants, now aligning with the movement to abolish ICE.

Voters will face a difficult question: If all or most of the Democratic candidates endorse a progressive agenda, who can actually be trusted to fight for that agenda once in office? Every politician makes promises. We know, however, that many will disappoint. Once in office, a president will have to resist pressure coming from many powerful interest groups. Without access to the candidate’s inner psychology, it’s tough to know which promises they’re committed to fulfilling.

One obvious clue as to what a person would do as president: their record. Have they spent their lives fighting for the causes they say they believe in? Or do they seem to shift positions depending on which way they perceive the political wind to be blowing?

In selecting candidates for the most powerful office on Earth, records should be treated as a resume. We can’t just look at their “job interviews”— speeches and platforms. We have to examine what they’ve actually spent their life doing, and whether they have exhibited the values and commitment that suggest they will live up to their promises.

This doesn’t mean that a candidate must have an unblemished history. It’s permissible to evolve as one gets more information. But if someone spent most of their life advancing an agenda objectionable to progressives, and then shifts position when the electorate begins to favor progressive policies, that doesn’t speak well for their moral compass. The only kind of person who can be trusted to hold up against special interests is one who has shown repeatedly that they feel their convictions to their core.

One could argue that personal qualities are altogether overemphasized, that the platform matters more than the person. Indeed, there is some political science research suggesting as much. However, platforms do not become policy unless elected officials fight to implement them, which means voters need to know that they’ve elected someone who is as good a fighter as they are a talker.

For example, Sen. Elizabeth Warren (D-Mass.) is responsible for building one of the most valuable of all federal agencies, the Consumer Financial Protection Bureau. It fights large banks and returns billions of dollars to defrauded consumers. This record gives us some confidence that Warren means what she says when she proposes a wealth tax or an employee co-determination scheme.

Democratic voters may also have had a better sense of how recent presidents would govern if they had scrutinized the first years of candidates’ political lives. As early as 1996, political scientist Adolph Reed warned that Barack Obama, then a state senator, had “vacuous-to-repressive neoliberal politics,” and that his “fundamentally bootstrap line was softened by a patina of the rhetoric of authentic community, talk about meeting in kitchens, small-scale solutions to social problems, and the predictable elevation of process over program.”

But at the 2004 Democratic National Convention, the country fell in love with Obama’s words, and his longstanding tendency to favor “process over program” was overlooked. Indeed, the traits Reed identified—using the rhetoric of community to paper over a lack of real action—turned out to be the central weakness of Obama as president. He showed far more of an interest in “bringing people together” than in taking on the powerful, and appointed a “Goldman Sachs” government featuring architects of neoliberal economic policy such as Larry Summers. If one had taken seriously Obama’s anti-Wall Street rhetoric in 2008, one might have been surprised by this. If one had looked at his long career of caution and centrism (as Reed did), this was exactly what one would have expected.

Voters are going to have to choose carefully in 2020. Based on current polling, it seems as if several Democratic candidates could beat Trump, including Warren, Sen. Bernie Sanders (I-Vt.) and Joe Biden.

But beating Trump is only the first task. The second task is to implement a progressive agenda—a must, considering that the deterioration of U.S. civic and economic life predates Trump. Voters need to demand candidates whose life trajectories and past actions make it clear that they have more to offer than politically convenient sound bites.

For a response to this piece, see “Why We Should Believe Campaign Promises.”

Nathan Robinson is the editor of Current Affairs magazine and the author of Trump: Anatomy of a Monstrosity.