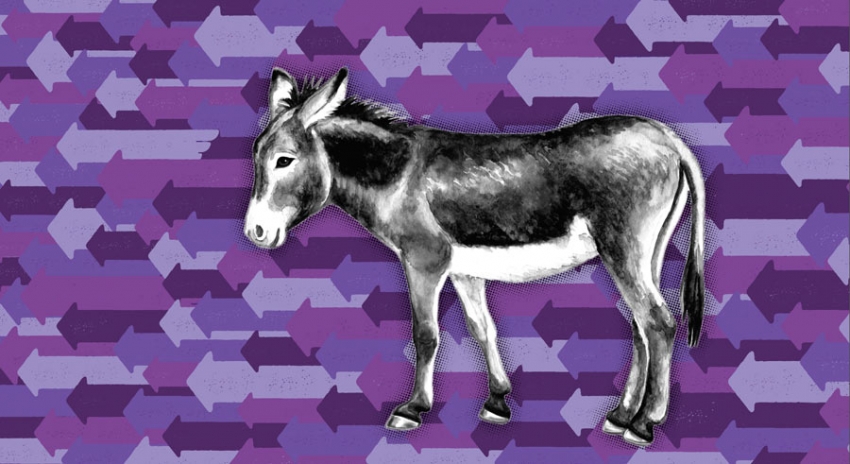 The Democratic donkey is starting to amble leftward. But is it all just talk? (Design by Matt Whitt)

Candidates must treat us not as voters to be won but as partners.

Co-governance means that elected officials are working with our communities—not corporate lobbyists—to draft policies and to move them forward together.

This piece is in response to “Lots of Presidential Candidates Talk a Good Talk. Look at Their Records Instead.” and “Why We Should Believe Campaign Promises.”

The 2020 presidential election, for many of us, will be the fight of our lifetime. We need a president who will take bold action on the issues shaping the lives of people in the multiracial working class.

That means building an economy that works for and is owned by the 99%, not the billionaire class; fighting for our immigrant communities; ensuring everyone has guaranteed access to healthcare, housing and education with no corporate profiteers; and facing the climate crisis head on through a just Green New Deal.

Many of the candidates seeking the Democratic presidential nomination are taking more progressive stances on these issues. This shift began from the bottom, from a people’s movement demanding our elected leaders take bold positions.

But while these politicians’ words might sound right, we can’t afford to fall for sound bites. So, whom do we trust?

Rather than look to a savior, it’s time to reimagine the relationship between politicians and communities. Elected officials need to treat us not as votes to be won but as partners in governance, beginning on—or long before—the campaign trail.

Whom candidates surround themselves with and listen to is crucial. Progressives should look at the structure of candidates’ campaigns: Who is funding them? Who are their advisors? Are they investing in real conversations with voters?

We must insist on representatives who will share governing power. Co-governance means that elected officials are actively working with our communities—not corporate lobbyists—to draft policies and to move them forward together. It’s about finding innovative ways to ensure that the people who are most harmed by structural racism and our profit-first economic system are part of co-creating the solutions.

Last year, community organizing group Colorado People’s Action (CPA), which I serve as executive director, endorsed Jason Crow for Colorado’s 6th District, which covers the eastern part of the Denver metro area. He met with a group of our core leaders monthly during the campaign to discuss issues affecting our community. Throughout those conversations, we saw him significantly strengthen his position in support of immigrant rights.

Now that he’s in the House, we have a commitment to quarterly meetings throughout his term to work together on policy ideas and bring forward community perspectives. If he “forgets” his promises, we are ready to hold him accountable through further meetings, petitions, actions and, if necessary, the 2020 primary.

In Wisconsin, too, we have “one of our own” in office: newly elected Lt. Gov. Mandela Barnes brings experience as a community and faith-based organizer with Citizen Action of Wisconsin, which, like CPA, is affiliated with the national People’s Action network.

The most trustworthy candidates are those with a history of working for justice before they even thought about running for office, so training our community’s strongest leaders to become candidates is a must. Since 2015, People’s Action has trained nearly 700 people on how to manage campaigns and run for office.

There are challenges in scaling up grassroots people power to the national level, but the increased energy and attention around presidential campaigns is also an opportunity. At People’s Action, we’ll be looking at who has a history of listening to and working with the people on the front lines—and who just wants a photo op. We’ll weigh not only what the candidates say about race, class and gender, but what that looks like in their campaigns and in their lives.

We’ll want to hear their bold ideas, and they should ask about ours. People’s Action and its member organizations are co-sponsoring People’s Presidential Forums in Iowa, New Hampshire and Nevada, in which presidential candidates are invited to engage onstage in real conversations with everyday people rather than just deliver a stump speech.

Whichever candidate we support—and whichever one wins—our fight for a country that works for its people will only happen when voters and organizations stop focusing only on election seasons.

Our work must be about building long-term, multiracial, people-powered movements around a shared agenda for racial justice and a people’s economy. We must build permanent organizations that will push bold ideas and raise strong leaders. Only those movements have the power to stand against billionaires and wealthy corporations and produce tangible change in our country.

And they produce the leaders—and the candidates—we can trust.