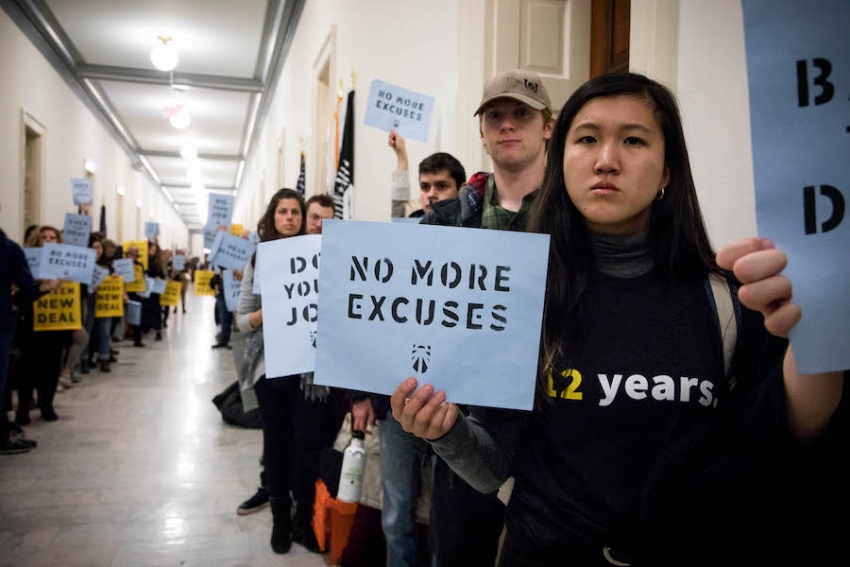 By day’s end, Sunrise had racked up nearly 150 arrests and support from the likely new leader of the House Rules Committee.

WASHINGTON, D.C.—Philadelphians Abigail Leedy, 17 years old and skipping school for the day, and Dwight Wilson, 24, led a group of more than 20 activists to the office of their congressman, Rep. Dwight Evans (D-Pa.), on Dec. 10, 2018. The group, affiliated with the climate advocacy organization Sunrise Movement, was there to demand that House members support a new select congressional committee to draft a Green New Deal.

Advocates say a select committee, which Democrats could create as soon as January, would be the most effective way to prepare such sweeping legislation—the Green New Deal is meant to both combat climate change and boost the economy. The proposal burst onto the national scene in November 2018, when Rep.-elect Alexandria Ocasio-Cortez (D-N.Y) joined a sit-in organized by Sunrise and Justice Democrats at the office of Rep. Nancy Pelosi (D-Calif.), the presumptive next House Speaker. But now, youth activists are beginning to feel the frustration of political reality, many for the first time.

When the protesters arrived at Evans’ office, he was not in. A staffer expressed Evans’ support for their climate activism and recommended they make a formal appointment.

He also had some unsolicited advice. “Why have 40 people here?” he asked. “Why not [target] Republican offices? Show some courage.”

Tensions quickly escalated. The staffer implored the young people to “learn a little about about House procedure and how it works” before making potentially unrealistic demands of Democrats. The Sunrise youth insisted they understood the political complexities, and reiterated the need for urgency.

Ultimately, both sides agreed to talk further, but the young activists left feeling discouraged: “That sucked,” one said. “It felt very rude and infantilizing and terrible.”

Reached by email, a spokesperson for Evans tells In These Times that “Congressman Evans is reviewing the [Green New Deal] proposal, which would constitute a sweeping set of changes.”

The activists made up one of more than 50 delegations to Democratic congressional offices that day to garner support for the Green New Deal proposal.

After the lobbying visits, the protesters sat in at the offices of House leadership. By day’s end, they had racked up nearly 150 arrests and support from Rep. Jim McGovern (D-Mass.), likely new leader of the House Rules Committee, for the select committee. Both Pelosi and Rep. Steny Hoyer (D-Md.), who will become House Majority Whip, demurred; on Twitter, Hoyer voiced support for the protesters’ “passion.” Pelosi has neither endorsed nor dismissed the idea.

As of Wednesday morning, 13 House members had signed on since the action, including Congressional Progressive Caucus chairs Rep. Mark Pocan (D-Wis.) and Rep. Pramila Jayapal (D-Wash.), bringing the total number of supporters in the House to 35.  All 13 were visited by activists Monday, and more visits are planned today and tomorrow.

The Green New Deal is, by all accounts, a bold proposal; Ocasio-Cortez and the youth-led Sunrise Movement compare it to the 1960s moonshot or post-World War II work programs. It would be the first climate legislation to marry ambitious environmental plans—converting to entirely renewable energy sources in 10 years, revamping the grid, modernizing and “greening” homes, businesses and infrastructure—with socioeconomic reforms to ensure equity, such as a climate-oriented jobs guarantee and a universal basic income.

Some members have expressed concerns that the new committee could interfere with other panels working on climate change, such as the Energy and Commerce Committee. But Sunrise plans to be so loud and visible that the Democratic Party can’t possibly ignore them, shifting the Green New Deal from left-wing activist pipe dream to a must-support.

The Sunrise youth made the threat of electoral challenge plain: They will aim to “kick people out of political power if they’re not listening to us and not accountable to us,” Sunrise spokesperson and cofounder Varshini Prakash told reporters.

Prakash said the movement will launch a “massive tour” in the spring, hoping to hold rallies with the “rockstar” power of Ocasio-Cortez and other new Democratic leaders committed to the deal, such as Rep. Rashida Tlaib (D-Mich.).

The Green New Deal strategy has drawn comparisons to the right-wing Tea Party movement, but the Pennsylvania Sunrise group said they’d proceed carefully with Evans, and likened their strategy to something else. How long would they wait, asked In These Times, before reaching out to Evans’ office again?

Amanda Palleschi is a journalist based in Washington, D.C. Follow her @APalleschi.