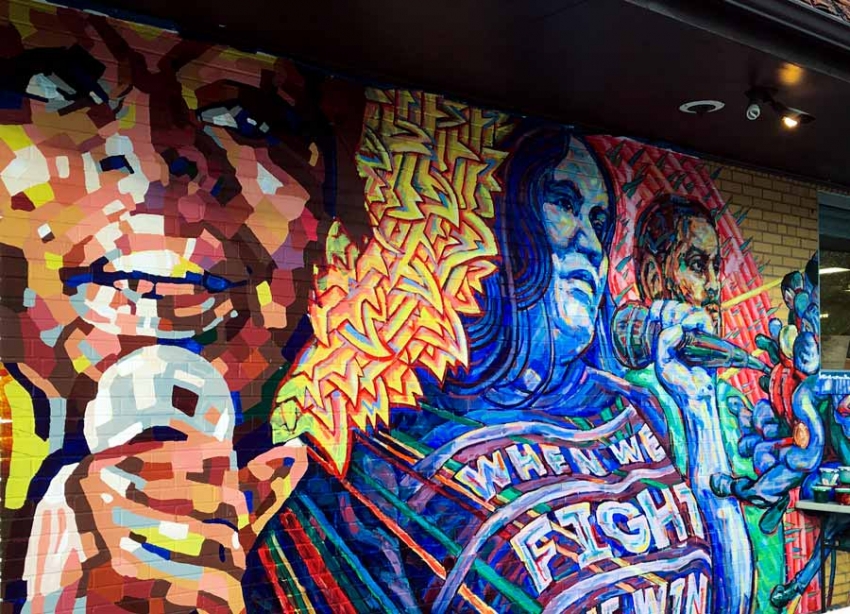 For some artists, the only way to avoid a corporate takeover of the mind, so to speak, is by steering clear of commercial commissions altogether.

Los Angeles, a city once known as the mural capital of the world, issued a citywide mural moratorium in 2002 to crack down on the growing issue of outdoor advertising passing as street art. The ban remained in place until a 2013 ordinance overturned it and set down strict new rules prohibiting commercial messages in street murals.

But in one of the first murals to go up the following year, by famous graffiti artist Risk, onlookers quickly noticed the spade-shaped logo of Miller Fortune beer. The advertisement sparked outrage and was quickly removed for violating the ordinance.

As more corporations and real estate developers across the country turn to murals to hawk their products, controversy follows. In New York City, for instance, Target had to apologize for a mural it installed inside a new store in the East Village. While the mural was designed as an homage to the neighborhood’s history as a home to punk rockers and struggling immigrants alike, it drew criticism for making light of the gentrification that had transformed the neighborhood.

Corporations are “one of the major threats to the modern mural movement,” explained Cory Stowers, a muralist and graffiti artist based in Washington, D.C. “They are co-opting the movement and the aesthetic for the creation of corporate art.” (Stowers, associate director of DC Murals, consulted with Hola Cultura, co-founded by the author, on a project documenting Latino murals in 2017.)

It’s an ironic trend considering that today’s community murals movement has its roots in the New Deal era and the Socialist Realism of the Mexican Murals Movement. A century ago, Diego Rivera and other artists created public art to unify Mexico in the wake of its 1910 revolution, celebrating the country’s indigenous history and its “heroic working class.” That influence can be seen decades later in Chicano muralism in the United States and other muralism around the world, which serve as powerful educational and organizing tools for correcting historical inaccuracies and celebrating shared values.

In the 1930s and 1940s, for example, the U.S. Works Progress Administration hired thousands of out-of-work artists to lift the spirits of a nation in the grips of the Great Depression by portraying the “American scene.” They created more than 15,000 artworks for universities and government The Brand-writing on the Wall Corporations co-opt street art buildings, including murals that depicted people working in factories, farms and tenements, as well as icons of American ideals such as Abraham Lincoln and Walt Whitman.

Today, community murals continue going up in inner-city ghettos, barrios, favelas and shanty-towns worldwide, inspired by those earlier movements and watershed works such as William Walker’s 1967 “Wall of Respect” in Chicago, which honored W.E.B. Du Bois, Nina Simone, Malcolm X and other African-American icons. This mural’s influence lives on in works such as Keir Johnston’s and Willis “Nomo” Humphrey’s 2018 mural, “Remembering a Forgotten Hero,” which celebrates the life of Octavius V. Catto, who fought for voting rights for African Americans only to be assassinated in 1871.

Increasingly, however, corporations have laid claim to public art in ways critics say make muralists accomplices to gentrification and consumerism. Wynwood, an upscale development in a downtrodden neighborhood of Miami, is perhaps the most infamous case of developers using murals to “artwash” a community, as art in service of gentrification is called. Goldman Properties bought up blocks of abandoned warehouses and dilapidated homes, then commissioned graffiti artists to create large-scale murals to beautify the neighborhood.

To tourists, art lovers and those moving into the expensive new homes, the late Tony Goldman, Wynwood’s developer, was a public art visionary. But sociologist Marcos Feldman labels him “a professional neighborhood gentrifier” in the short documentary “Right to Wynwood,” which looks at how the development displaced longtime residents. Filmmakers Camila Álvarez and Natalie Edgar told WLRN public radio that, as artists, they like the vibrancy of the new Wynwood. But, Álvarez said, the murals felt “kind of artificial because a business model was brought and gentrification was planned. It was developer-led, instead of being artist-led.”

Commercial interests have funded the rise of internationally known street artists like Shepard Fairey, author of the Obama Hope posters, along with a Levi’s clothing collection and wall art built around Fairey’s “Obey” trademark. Sometimes the murals don’t include overt commercial messages but help a brand “get their name out there in the subculture,” Man One, a graffiti artist in Los Angeles, told the TV station KCET. His mural, “Elephunktl,” a stylized elephant wearing a feathered headdress on a storefront in Lincoln Heights, Calif., was paid for by Red Bull, for instance. While the mural does not include a direct Red Bull reference, the brand has received plenty of publicity for its video showing Man One’s artistic process.

The ads work because they don’t look like ads, says Francesca Romana Puggelli, who teaches a course on advertising psychology at the University of Southern California. Consumers, particularly younger people resistant to traditional advertising, “don’t think ‘what does this mural want from me?’” she says. “They just see art.”

But some artists worry this type of “sponsored” muralism could damage society’s support for public art, by blurring the lines between art and advertising and making it more difficult for street artists to find walls that haven’t been monetized. Advertisers now routinely pay building owners thousands of dollars a month to rent a wall.

Some street artists, who consider corporate graffiti an oxymoron, have taken aim at those they consider sellouts. Joey Krebs, known as The Phantom Street Artist, is among those who accuse Fairey of ripping off the artwork of genuine political and cultural movements like the Black Panthers “to advance his own market and public relations interests.”

Fairey responded to criticism of his work at Wynwood Walls in an interview with the Miami New Times, saying, “Art can prime the neighborhood for gentrification. Blaming art is the wrong tactic, though. Looking at policies around aggressive business practices is a more targeted approach to the problem.”

Like many artists, Elizaveta Meksin, a New York City-based artist and assistant professor of art at Columbia University, sees upsides and downsides to corporate muralism. “Artists deserve to make a living,” says Meksin. Commissions from corporations often pay much more than the few thousand dollars muralists usually receive from government agencies and nonprofits for community murals.

But for some artists, the only way to avoid a corporate takeover of the mind, so to speak, is by steering clear of commercial commissions altogether.

Aaron Johnson-Ortiz is one such artist. Last year, he finished his first mural on the façade of a Minneapolis building that houses a workers’ center and a tenants’ rights group. The project was commissioned by Centro de Trabajadores Unidos en Lucha (Center for Workers United in Struggle), after the Minneapolis city council voted to raise the city’s minimum wage to $15 an hour by 2024.

When Johnson-Ortiz asked community members what they wanted to see on the mural, they said they wanted to see themselves—the people making their own history by standing up for their rights. So, he used photographs from picket lines to paint real construction and service industry workers.

“There is this big question around what is the role of artists in social justice,” Johnson-Ortiz says. “So for me to do the mural at the workers’ center and the tenants’ union [building] felt really good because it meant I was amplifying the message of the people doing the work.