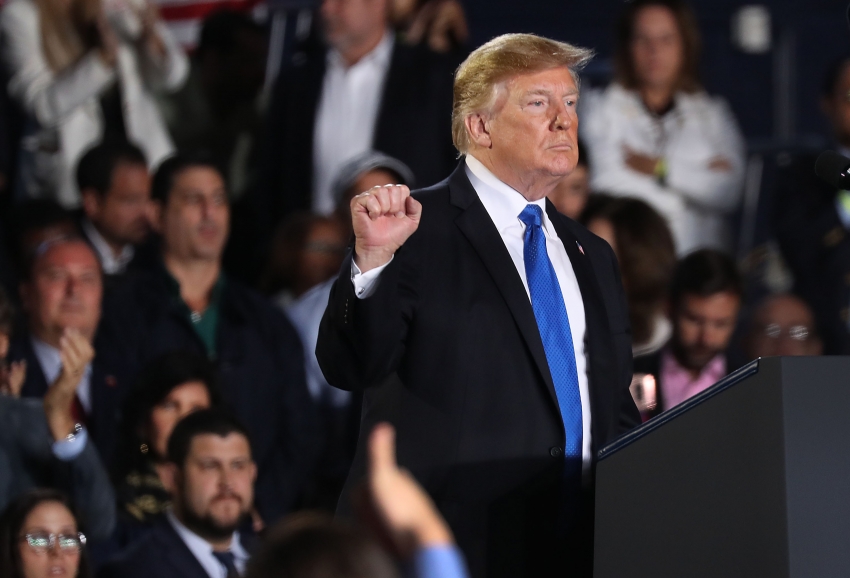 U.S. Invasion of Venezuela Would Be a Nightmare for Its People

Under the pretext of delivering aid, Trump is threatening to unleash military violence.

This is setting the scene for conflict. And that is exactly what the United States and Guaidó are looking for.

On Monday, Trump issued an ultimatum to Venezuela’s troops. Either defect and back Juan Guaidó the United States’ man in Venezuela, or suffer.

“If you choose this path, you will find no safe harbor, no easy exit, and no way out. You will lose everything,” he said during a speech, while he was visiting with the Venezuelan community in Miami.

It’s the latest in a slow-moving U.S. effort to topple Venezuelan president Nicolas Maduro, that has seen the United States back National Assembly president Juan Guaidó in his grab for the presidency, and impose a second round of devastating sanctions on Venezuela, blocking it from crucial oil revenue from sales in the United States.

The latest phase of the coup centers on tons of humanitarian aid that the United States is trying to force into the country. Over the weekend, U.S. military C-17 cargo planes landed in Colombia carrying aid for Venezuela. It’s the second attempt by the United States to carry aid into the country, a move the UN has warned against and which Venezuela sees as laying the groundwork for a U.S. military deployment.

Venezuela’s Nicolas Maduro, who is wary of the true U.S. intentions, has refused to allow the assistance across the border. Juan Guaidó has said the aid will enter Venezuela on February 23, and has called on Venezuelans to mobilize across the country and form aid “caravans” and a “humanitarian avalanche” at the borders.

This is setting the scene for conflict. And that is exactly what the United States and Guaidó are looking for.

“Any actions by the Venezuelan military to condone or instigate violence against peaceful civilians at the Colombian and Brazilian borders will not be forgotten. Leaders still have time to make the right choice,” White House National Security Advisor John Bolton tweeted on Tuesday night, as if laying out the future justification for a response from the United States or its Colombia allies.

Using humanitarian aid as a weapon

Both the United Nations and the Red Cross warned the United States against using aid deliveries to Venezuela as a political tool. “Humanitarian action needs to be independent of political, military or other objectives,” UN spokesperson Stephane Dujarric told reporters in New York in early February.

Venezuela does accept international support. The Red Cross doubled its budget for Venezuela in recent weeks to 18 million Swiss francs. Maduro announced that 300 tons of medicine and other aid would arrive from Russia on Wednesday, although this has been barely been mentioned in the U.S. media.

As Adam Johnson pointed out earlier this month for Fairness and Accuracy in Reporting, the U.S. aid is nothing more than a P.R. stunt. If the United States wanted to send aid to Venezuela, it would be doing it through the Red Cross and another organizations that are already working in the country, with the consent of the Maduro government.

Instead it is looking to create conflict.

“The cost of this blockade is over 30 billion dollars,” Venezuelan foreign minister Jorge Arreaza told reporters at the United Nations, referring to the cost of the U.S. sanctions. “And they're sending this so-called 'humanitarian aid' for 20 million dollars? So what is this? I'm choking you, I'm killing you, and then I'm giving you a cookie?”

The aid is actually not very large. Trump says it will help “the millions and millions in need”, but according to a USAID press release, the figure is in the thousands. A team from The New York Times visited the warehouse in Cucuta and estimated that it could maybe feed 100,000 people for one day.

In the 1980s, the United States used aid shipments to shuttle weapons into the hands of Contras, who were trying to overthrow the Nicaraguan government. The man responsible for those shipments was Elliott Abrams, Trump’s new special representative for Venezuela.

Showdown at the border

Now British billionaire Richard Branson is weighing in. He is planning to hold a Live Aid-inspired concert on Friday in Cucuta, along the Venezuelan-Colombian border, the day before Guaidó’s deadline. He says his goal is to raise more money for aid and to get the shipments across. He admitted that the show came at the request of Guaidó and opposition leader Leopoldo López.

But Maduro says the United States is using the supposed humanitarian crisis as a pretext for military intervention.

This comes several weeks after Bolton appeared at a White House press briefing with a yellow clipboard on which the words “5,000 troops to Colombia,” were written.

Colombian president Ivan Duque was in Washington last week to discuss the Venezuelan situation with Donald Trump. He has called for Maduro to step down and has recognized Guaidó as interim president, though he has been tight-lipped about the question of whether he would allow U.S. troops into the country from which to launch a potential invasion of Venezuela.

“What I can say is that we are working actively, decidedly, for the liberation of the Venezuelan people,” Duque told Bricio Segovia, a journalist with the U.S.-government news service Voice of America.

Last week, Cuba accused the United States of sending special forces to Puerto Rico and other Caribbean islands with the goal of toppling President Nicolas Maduro.

U.S. media have been helping to build the case for invasion by repeating the U.S. government line on Venezuela and failing to point out the complexities of the crisis. Bloomberg went so far as to propose that perhaps there are positive invasions after all. It published an article on Saturday titled “In Venezuela's Backyard, Here's a U.S. Invasion That Ended Well,” which tried to paint the 1989 U.S. invasion of Panama as an example where U.S. military intervention has gone right.

The article left out the death and destruction. The estimated 3,500 killed. The Panama City neighborhood El Chorrillo was so wiped out that ambulance drivers called it “Little Hiroshima.” A truth commission had to be set up to investigate the facts.

Trump’s rhetoric on Venezuela seems to point toward justifying military action by the United States or its proxies. “We want to restore Venezuelan democracy,” Trump told Venezuelans in Miami. “The twilight hour of socialism has arrived in Venezuela and frankly in many many places around the world.”

Any resolution to the crisis by force will not end well. If the the United States goes down this path, it will mean mean devastation for Venezuela and its citizens. Violent intervention could easily unleash a bloody civil war that would have repercussions across the region. Ironically, the louder Trump barks, the less support the United States is going to have in Venezuela for any action it might take. Dictating demands in the name of the Venezuelan people will not resolve the impasse in Venezuela. It will only make it worse.