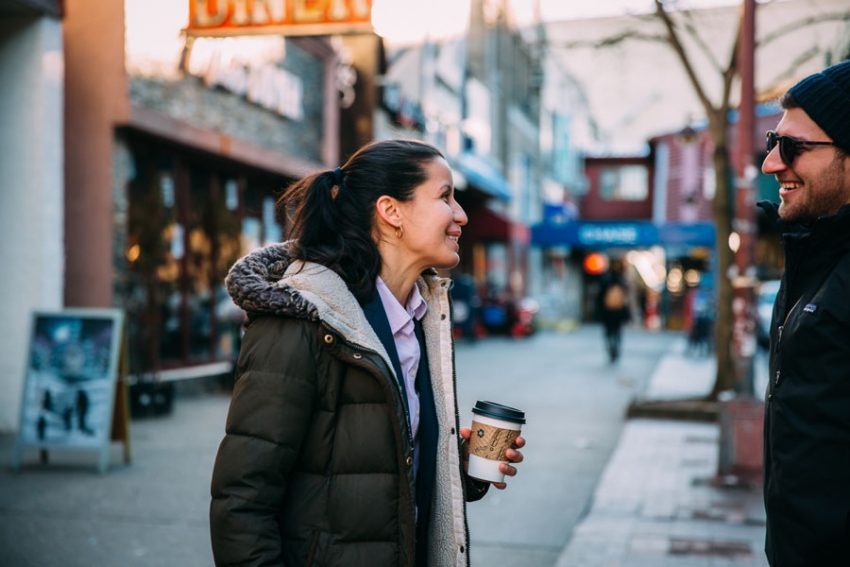 Public defender Tiffany Cabán, 31, who earned an endorsement from Queens DSA on a decarceration platform in the Queens district attorney race, campaigns February 9. (Megan Magray for Caban for Queens)

'When DSA endorses in New York, we bring an army.'

QUEENS, NEW YORK—A city councilman, a state prosecutor and a public defender walk into a forum, seeking the socialist vote. This is not a joke; this is the new Queens. Since U.S. Rep. Alexandria Ocasio-Cortez (D-N.Y.) toppled the old order last year, candidates for the borough’s top law-enforcement office—even those with war chests topping $1 million—now come calling for an endorsement from the Democratic Socialists of America (DSA).

In the first Queens district attorney election up for grabs in a generation, candidates have taken notice of the movement to end mass incarceration and are placing reform at the top of their agendas. In what was once a law-and-order bastion, candidates race to emphasize the crimes they won’t prosecute.

The 60 or so socialists sitting in metal folding chairs at the forum are not an easy crowd. Councilman Rory Lancman (whom the New York Times has dubbed a reform candidate in the vein of Philadelphia District Attorney Larry Krasner) draws eye rolls for repeatedly beginning his answers, “This isn’t academic…” as he delves into policy.

After the moderator-led questioning, DSA members line up at the mic. Should the police oversight agency, the Civilian Complaint Review Board, include elected representatives? (Absolutely, says Cabán.) Should Amazon HQ2 protesters face charges if arrested? (No, says Cabán, who holds “know your rights” seminars for activists.)

The Queens DSA electoral working group, the Queens DSA branch and the citywide leadership committee then considered both the forum and a lengthy questionnaire in deciding which candidate, if any, to endorse. Cabán, daughter of an elevator mechanic and a daycare provider, overwhelmingly won each round of voting. The only holdouts were those opposed to any endorsement in the district attorney race.

Whether movement groups should endorse candidates for district attorney has been the subject of debate. Some prosecutors who run as progressives disappoint once in office. In Illinois, Cook County State’s Attorney Kim Foxx has been chastised by progressive groups for failing to fulfill promises on pretrial release and reduction of petty drug cases. “Wesley Bell in St. Louis County is ‘progressive’ because he won’t prosecute lowlevel marijuana cases, and Larry Krasner in Philadelphia is ‘progressive’ because he won’t prosecute any marijuana cases,” says Derecka Purnell, a lawyer and prison abolitionist. “Is this a progression from the types of prosecution that we saw during the War on Drugs? Yes. Is it enough to combat the inherently racist and classist everyday job of prosecutors, which is to put people in jails and prison? Absolutely not.”

“[DSA] members worry about giving credibility to any part of the carceral state,” says Sasha Weinstein of the Queens DSA electoral organizing committee. “But we respect the goal of harm reduction, and at the end of theday, we recognized the duty to use the tools at our disposal to fight the existing system.”

Cabán says she puts “the collateral consequences of incarceration at the forefront of decision-making,” citing housing discrimination, diminished employment prospects and trauma to families. “We should be doing everything we can to keep people  in their communities,” she says.

Over the past five years, places as far-flung as Corpus Christi, Texas, and Kansas City, Mo., have elected reform prosecutors. In Philadelphia, Krasner swept into office in 2017 on a campaign to end mass incarceration and fired 31 prosecutors in his first week. Under his reforms, Philadelphia’s jail population has dropped by about 30 percent. In Boston, Rachael Rollins won office in November 2018 on a promise to stop prosecuting 15 low-level crimes. In San Francisco, Chesa Boudin, a public defender and the son of Weather Underground radicals, is making a run for district attorney.

When Krasner announced his run to his civil rights law firm’s staff, they laughed. The police union president deemed the idea “hilarious.” That’s not happening in Queens.

“When DSA endorses in New York, we bring an army,” says Aaron Taube, a volunteer DSA organizer. That army helped power the victories of Ocasio- Cortez in parts of the Bronx and Queens, and state Sen. Julia Salazar in Brooklyn. But a borough-wide campaign poses a new challenge. “It’s going to be tough,” Taube says. “It’s a huge borough. … The challenge is not convincing people that it would be good if candidates like Cabán won, but that they can win.”

In advance of the June primary, the field has grown to seven candidates. The Queens County Democrats—led by former U.S. Rep. Joe Crowley, whom Ocasio-Cortez ousted—endorsed borough president Melinda Katz. Street outreach by DSA began February 26, as voters headed to the polls for New York City’s public advocate race. DSA volunteers used  the opportunity to collect signatures to get Cabán on the ballot.

Cabán sees a particular value in having DSA’s “army” on her side: “One thing I have learned over my time with them is they mobilize. Not just trying to share their knowledge, but more importantly, learning—asking the community what it wants and engaging in a dialogue.”

DOUGLAS GRANT is a Brooklyn-based writer and a member of the North Brooklyn DSA (and was not involved in Queens DSA’s endorsement decisions).

Former Leaders of SDS, Meet the Current Members of DSA