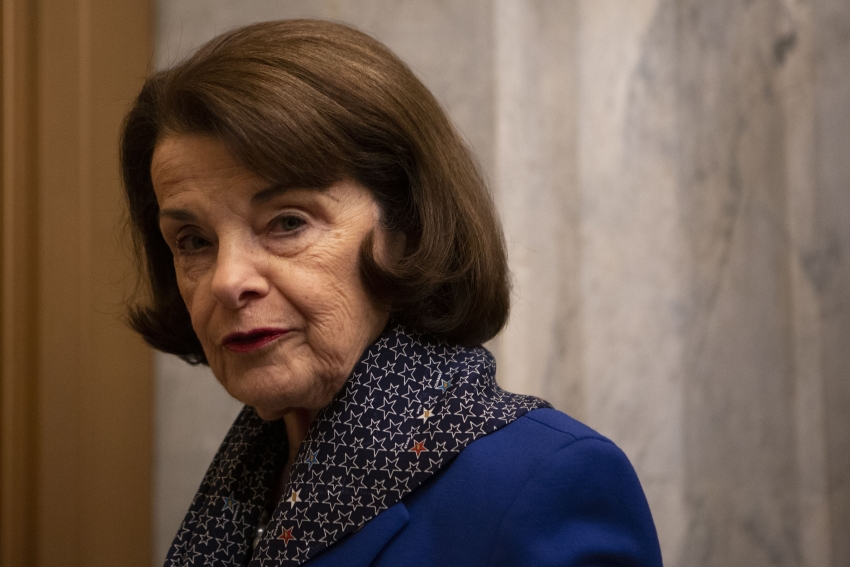 Why Is Dianne Feinstein So Opposed to the Green New Deal? Look at Her Family Finances.

On February 22, footage of Sen. Dianne Feinstein (D-Calif.) lecturing pleading children about her opposition to Alexandria Ocasio-Cortez and Ed Markey's Green New Deal resolution went viral. Several media commentators on both sides of the debate cast the video of the 85-year-old senator dressing down the children as a case of generational conflict.

But the episode was also a reminder of the peril of wealth inequality in politics, with Feinstein, one of the very wealthiest members of Congress, having a personal financial stake in industries whose bottom lines would be threatened by the measures in the Green New Deal resolution.

Feinstein, whose net worth stands at $58.5 million, has been married for nearly 40 years to Richard C. Blum, a wealthy investor who still runs the private equity firm he founded in 1975, Richard C. Blum & Associates, Inc. According to Feinstein's most recent financial annual report, filed in May 2018 and covering the 2017 calendar year, Blum owns 100 percent of Yosemite Investments LLC, through which he has hundreds of thousands of dollars invested in several fossil fuel companies, some of which he has sold off since the Green New Deal began gaining increasing national attention.

According to an amendment filed in January, Blum in August 2017 invested more than $1 million in the Osterweis Strategic Income Fund, a mutual fund run by investment firm Osterweis Capital Management. Among Osterweis’s top ten holdings are logistics firm XPO, a subsidiary of methanol producer Consolidated Energy Limited, a subsidiary of commercial aircraft leaser Avation PLC, and mining company Teck Resources, which holds interests in a number of different oil sands projects across the border in Canada, including the controversial Frontier project.

All of these companies could potentially be impacted by measures proposed in the Green New Deal, such as creating a nationwide high-speed rail network, transitioning to a fully renewable energy grid and shifting to electric vehicles. These measures would not only sharply curtail the demand for fossil fuels, but wean ordinary Americans and businesses off their reliance on air travel and trucking.

The same goes for some of the Osterweis fund's other holdings such as Calumet Specialty Products, NGL Energy Partners and Icahn Enterprises. The latter is the business vehicle for fossil fuel investor Carl Icahn, a Trump ally who helped shape the president’s policy on the Environmental Protection Agency, and subsequently profited from it.

Feinstein and her husband haven’t held on to all of their fossil fuel-related assets. The annual report covering 2017 showed they had over $100,000 invested in oil field service giant Halliburton and industrial conglomerate Danaher, each. Among the many companies owned by Danaher are McCrometer, which provides measurement technology for the fossil fuel industry, and Pall, which supplies the oil and gas industries.

According to transaction reports filed during 2018, Blum sold the Halliburton stock in February 2018 and later sold investments in Danaher. He also sold his over $250,000 investment in oil and natural gas pipeline company Enterprise Products Partners.

These sales don't necessarily point to anything nefarious. As these reports show, Blum regularly buys and sells stock in a number of different companies from month to month. But the disclosures also make clear that Blum and Feinstein have a direct financial interest in companies linked to the fossil fuel industry.

Of course, it may not simply be Feinstein's husband's finances that led her not to “agree with what the resolution says” and threaten to vote “present” on the Green New Deal. There are also campaign donations she has received from companies that profit from fossil fuels. California's Pacific Gas & Electric Company stands as Feinstein's single biggest contributor over the course of her career. And she has long been one of the Senate's more conservative Democrats, meaning that she may genuinely believe “there’s no way to pay for” the Green New Deal even as she votes for ballooning military budgets. (Incidentally, defense contractors have been some of Feinstein's most generous donors over the years).

Still, it wouldn't be the first time Feinstein's work as a legislator has overlapped with her husband's personal finances. Blum spent years heavily investing in China while Feinstein pushed for closer economic relations with the country. In 2007, Feinstein introduced legislation that increased tuition aid for low-income students at for-profit colleges, to the benefit of two such entities owned by Blum Capital Partners. That same year, Feinstein resigned from the Military Construction Appropriations subcommittee after an investigation revealed she had helped drive billions of dollars worth of defense contracts to companies Blum controlled after being explicitly informed about projects involving one of the companies.

The Feinstein episode points to broader tensions revealed by the Democratic Party's continued reliance on wealthy, well-connected candidates. The Intercept reported last year that Democratic operatives regularly ask prospective candidates to be able to raise a minimum of $250,000 from the contacts in their phones alone. As campaigns continue to become more costly, leaning on connected or independently wealthy candidates may produce election victories, but it also runs the risk of producing legislators who are financially invested in the very industries they're meant to be challenging.

“I was elected by almost a million vote plurality,” Feinstein told the down-hearted group of children after assuring them environmental catastrophe was “not going to get turned around in ten years.” Indeed, Feinstein beat back her progressive challenger Kevin de Leon last year even after the California Democratic Party abandoned her.

With Feinstein’s open opposition to the Green New Deal, her voters may well question whether her family’s personal finances are helping to drive her more timid positions around the life-threatening issue of climate change.