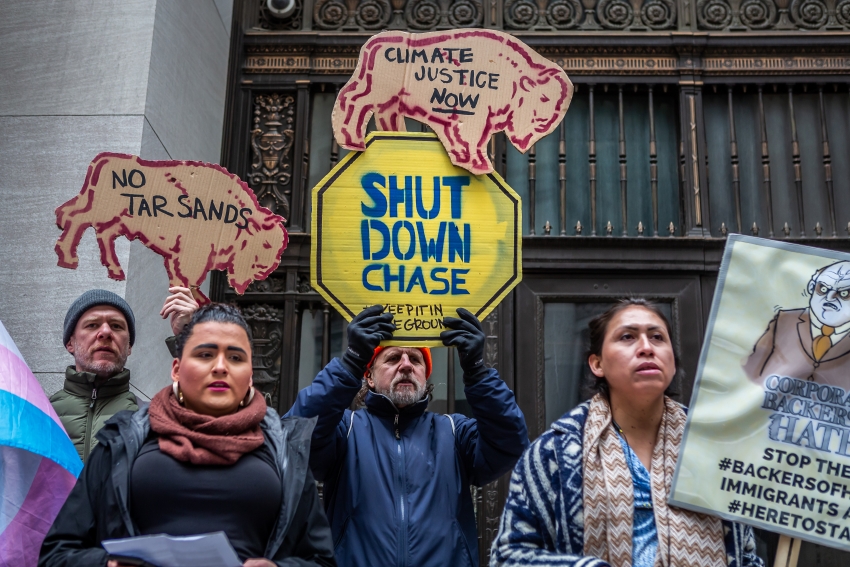 Private banks have been underwriting the expansion of the fossil fuel industry for years. It’s time for a public model.

Major world banks have issued $1.9 trillion in loans for fossil fuel projects since the Paris agreement was adopted in 2016.

NEW YORK CITY—Wall Street bankers in expensive suits stopped and snickered on their lunch breaks June 5, 2018, as an eclectic group of New Yorkers with megaphones and banners called them out for investing in socially destructive industries—including private prisons, predatory lending, weapons manufacturing and, of course, fossil fuels.

This rally marked the launch of the Public Bank NYC coalition, more than 20 grassroots groups seeking a banking alternative. Because public banks are not run for the benefit of private shareholders, the banks can offer lower rates and fees, and profits can be reinvested into the community rather than trickling up to the already-wealthy. The banks can also be structured to make only socially and environmentally responsible investments.

Big banks, meanwhile, are essentially underwriting the expansion of the fossil fuel industry.

“There is no question that the big banks are a key driver of climate destruction,” says Andy Morrison, campaigns director for the NYC-based New Economy Project, a member and co-founder of Public Bank NYC.

A 2019 Rainforest Action Network report found that major world banks have issued $1.9 trillion in loans for fossil fuel projects since the Paris agreement was adopted in 2016, with U.S. banks JPMorgan Chase, Wells Fargo, Citi and Bank of America leading the pack. The amount the banks invested in clean energy was “swamped by the volumes they funnel into fossil fuels.”

But without publicly owned alternatives, our cities and states have no option but to hand over the management of public resources to these for-profit institutions.

New York City’s “short-term deposits are sitting in big Wall Street banks making low returns,” says Stephan Edel, project director of New York Working Families, a member of Public Bank NYC. In a public bank, that money could reap higher returns at lower fees and go to work for the common good. Edel adds that a public bank could eventually take investments from the city’s $200 billion pension fund, and even help fund the transition to a zero-carbon economy—which will require billions in public investment—without raising taxes or adding on more government debt.

This is because of the unique ability of banks, under our financial system, to multiply their deposit money, explains Edel: “If a bank has an average of $30 million in capital, the bank can lend out several times that amount.”

Public banking has already been implemented to great success in Germany, where the third-largest bank is state-owned and has underwritten energy efficiency upgrades for more than 3.5 million homes. Rep. Alexandria Ocasio-Cortez (D-N.Y.) and Sen. Ed Markey’s (D-Mass.) Green New Deal resolution draws from this model in its proposal for the formation of a system of new public banks. A 2011 report by public policy research organization Demos examined the effects of the Bank of North Dakota, the sole public bank in the continental United States (established 1919), and found the bank’s lower-cost loans and municipal financing not only saved money for the state but helped small businesses and spurred economic and job growth.

In New York City, “financing is a big barrier” for solar conversions, says Noah Ginsburg, director of the Here Comes Solar program at Solar One, a nonprofit provider of technical assistance for local solar projects. This is because of the “shortage of mission-aligned financial institutions.” Transitioning a multi-family building to solar can still cost as much as $100,000, Ginsburg says, more than an affordable housing provider may be able to finance, even if the system pays for itself in five years.

Public banking initiatives offer a next step for the powerful divestment movement that began in 2011 on U.S. college campuses—which has successfully pressured some institutional funds to withdraw their money from destructive industries and the banks that prop them up—and they’re gaining steam.

The U.S. territory of American Samoa established a public bank in 2016. Revolution LA, a group that started as just five organizers in 2014, grew into a sizable force that convinced the city of Los Angeles to divest from Wells Fargo and then, on a shoestring budget of $44,000, nearly passed a 2018 ballot measure to create a city-owned bank (with 42 percent of the vote). Now, Revolution LA is joining the California Public Banking Alliance (CPBA), a coalition of nine other California cities committed to funding a Green New Deal and ending taxpayer-facilitated financing of the fossil fuel industry. In March, two California legislators introduced an assembly bill backed by the CPBA that would enable cities and regions to charter their own banks.

Public Bank NYC is gathering input to shape a public banking proposal to be introduced this year. “Our effort is rooted in racial justice and community organizing and base-building,” Morrison says. “We’re fighting for a bank that would promote community-led development and democratic participation. And we think that’s perfectly in sync with the aims of the Green New Deal.”

Aaron Fernando is a writer based in Ithaca, N.Y., covering alternative economics initiatives.