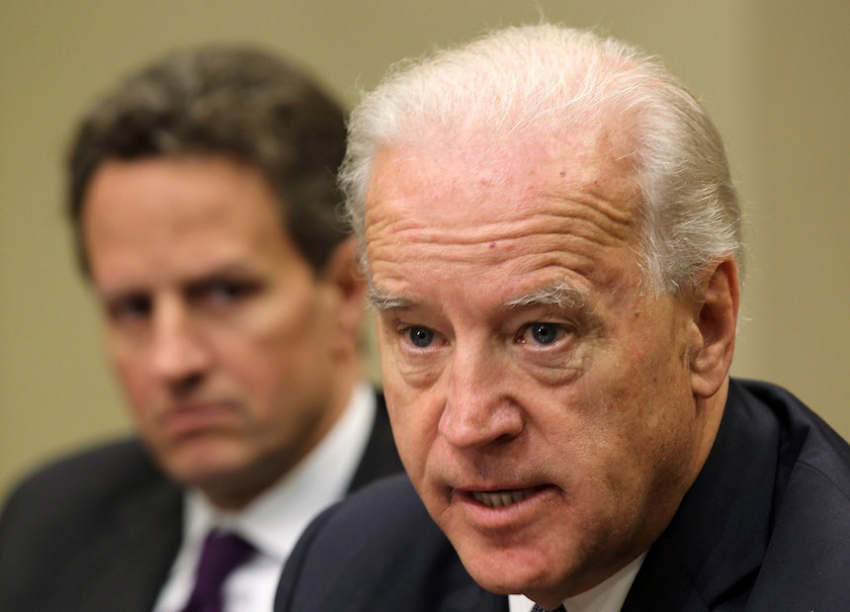 Biden Says He’s the Workers’ Candidate, But He Has Worked To Cut Medicare and Social Security

Former Vice President Joe Biden, who officially announced his presidential campaign on Thursday, is positioning himself as the defender of the embattled working class: giving speeches to union audiences, tapping organized labor for early support, walking the Stop & Shop picket lines, and pairing his announcement with a reportedly impending endorsement from the International Association of Firefighters, who have pledged to help him raise money.

However, an episode from the not-so-distant past cuts against this “friend of the working man” image: Biden's leading role in the Obama administration's 2011 efforts to slash the deficit by offering Republicans spending cuts to Medicare and Social Security.

At the time, the GOP had just finished giving then-President Obama a “shellacking” in the 2010 midterms, with a brand new majority in the House to show for it. Obama was largely focused on three things: raising the debt ceiling to avoid a looming and potentially catastrophic debt default; avoiding a government shutdown; and reaching a “grand bargain” with Republicans over spending, including to so-called entitlement programs like Social Security and Medicare that had long been in the crosshairs of the GOP and other deficit hawks.

Obama had been open about his plans to take on Social Security and Medicare, pledging to the staff of the Washington Post only a few days before his 2009 inauguration that he would “spend some political capital on this.” He tasked Biden, a veteran of congressional wheeling and dealing, with spearheading negotiations.

Biden had an ambivalent relationship with government spending. Considered in the 1980s to be one of the Democratic Party's new “neoliberals,” Biden called then for a spending freeze on Social Security and a higher Social Security retirement age. In 1995, he cast his vote for a balanced budget constitutional amendment, despite his earlier criticisms of it. The choice was, he said, “an imperfect amendment or continued spending.” When he ran for president 12 years later, he again called for the Social Security retirement age to go up.

In journalist Bob Woodward's 2012 book The Price of Politics, he portrays Biden during Obama’s first term eager to sacrifice Social Security and Medicare for the sake of bipartisan compromise and achieving what would be, in the eyes of Washington, a political victory.

Biden first displayed his friendliness to GOP entitlement hawks when he appointed former Wyoming Sen. Alan Simpson to co-chair  the president's National Commission on Fiscal Responsibility, created in February 2010 via executive order. Simpson was one of Congress's most high-profile foes of entitlements and a proponent of Social Security privatization. In Woodward's telling, Biden even had to lightly pressure a somewhat reluctant Simpson to take the role.

Sure enough, the Simpson-Bowles Commission, as it came to be known, recommended cuts to Medicare, Medicaid and Social Security, leading liberal economist Paul Krugman to label the commission “terrible.” Failing to secure enough votes from the commission to recommend the plan to Congress, the proposals were never taken up.

But Biden took a far more direct role in undermining Social Security and Medicare when he headed tax policy negotiations with Senate Minority Leader Mitch McConnell in December 2010. In Woodward's telling, Biden's eagerness to cut a deal with the Republicans sometimes elicited outrage from his fellow Democrats, who felt he was giving too much away.

An Obama priority was to end the Bush tax cuts on top earners. Woodard reports that, to achieve this, Biden's team at one point considered dropping the poorest citizens—anyone who didn’t pay income taxes—from the Obama stimulus payments of $400 a year. Economist Gene Sperling, then a counselor to Treasury Secretary Timothy Geithner, strongly objected, calling the idea “immoral.” At Sperling’s urging, Biden’s team instead proposed a holiday for payroll taxes, which are used to fund Social Security and Medicare.

The final deal extended the Bush tax cuts, cut payroll taxes by $112 billion and met a host of other Republican demands: a lower estate tax with a higher exemption, new tax write-offs for businesses, and a maximum 15 percent capital gains tax rate locked in for two years. In return, unemployment insurance was extended for 13 months and the Opportunity Tax Credit for two years.

House Democrats were furious at both the estate tax provision and the Bush tax cut extension, partly because, according to Woodward, Biden had failed to mention the extension was on the table when he briefed Democratic leaders during the talks. Even conservative Democrats like House Whip Steny Hoyer had strongly opposed the extension, and the deal drew consternation from across the party. Dianne Feinstein balked at its size, and Bernie Sanders and two other senators interrupted Biden's presentation of the package. Sanders later vowed to “do everything I can to defeat this proposal,” including filibuster it. However, enough Democrats eventually capitulated, with some grumbling, for the deal to pass, overcoming an eight-hour filibuster by Sanders.

At one point, Biden suddenly called for $200 billion more in cuts that had never been discussed, which, according to Woodward, led then-Maryland Rep. Chris Van Hollen—also involved in the negotiations—to believe Biden had gone over to the Cantor-Kyl side. Biden again crossed Van Hollen when he offered to take revenue-raising out of the “trigger”—a combination of revenue raising and spending cuts meant to be equally unpalatable to both parties, which would automatically kick in if a deal failed to be reached.

Later in the negotiations, Biden dangled the possibility of Medicare cuts in return for more revenue—meaning higher taxes. Soon after, he suggested Democrats might be comfortable raising the eligibility age for entitlements, imposing means testing and changing the consumer price index calculation, known as CPI. (Means testing is often seen a Trojan horse for chipping away at these programs, because their universality is one of the reasons they've remained virtually untouchable for almost a century. It’s also been criticized for imposing an unnecessary and discouraging layer of bureaucracy.)

At one point, Biden reportedly called the Medicare provider tax a “scam.” “For a moment, Biden sounded like a Republican,” Woodward notes. Biden’s team was forced to remind him that such a move would force states to cut services to the poor, to which he replied, “We're going to do lots of hard things,” and so “we might as well do this.”

As Woodward writes, “this was a huge deal” for Cantor (“Biden had caved”), and showed the administration had adopted the Republican view on the matter of the Medicare provider tax. Despite this giveaway, the Republicans continued their stubborn opposition to any revenue increases in the proposed deal.

The negotiations were ultimately scuttled by Cantor, after Biden inadvertently revealed to him that then-Speaker of the House John Boehner was secretly holding his own “grand bargain” talks with Obama. But the Biden portrayed in Woodward's book continued this pattern of bending over backwards to achieve the Republicans' cooperation in subsequent negotiations.

When Obama later in 2011 put forward what he called the “big deal”—$4 trillion in deficit reduction, namely through “bend[ing] the cost curve” of Medicare, Medicaid, and possibly even Social Security—Biden insisted to Republicans this approach was the best way forward on cutting spending. According to Woodward’s account, Biden later appeared to offer Boehner a deal of one dollar cut from Medicare and Medicaid for every dollar of revenue.

Months into the negotiations with recalcitrant Republicans, Biden admitted that he and the administration had given away everything in their attempt to strike the “grand bargain.”

“We've given up on revenues, we've given on dollar for dollar,” Woodward quotes Biden telling McConnell. “All the major things we're interested in we've given up. So basically you've pushed us to the limit.”

Ironically, the fact that the “grand bargain” never happened—and that the Obama administration failed to team up with Republicans to cut Social Security and Medicare—was a result of a stubborn GOP's refusal to give ground on just about any issue.

Yet there are indications that another “grand bargain” may be in the cards should Biden win the presidency. In a speech last year at a joint event held by the Brookings Institution and the Biden Foundation, Biden said, “Paul Ryan was correct when he did the tax code. What’s the first thing he decided we needed to go after? Social Security and Medicare. We need to do something about Social Security and Medicare.” At the event, Biden suggested the programs should be means tested, and would require “adjustments.”

Biden’s willingness to go after the last remnants of the New Deal may well win him points from the political establishment, which has long treated such an approach as a mark of seriousness. Whether it wins him points among voters, who are overwhelmingly supportive of such programs, is another story altogether.