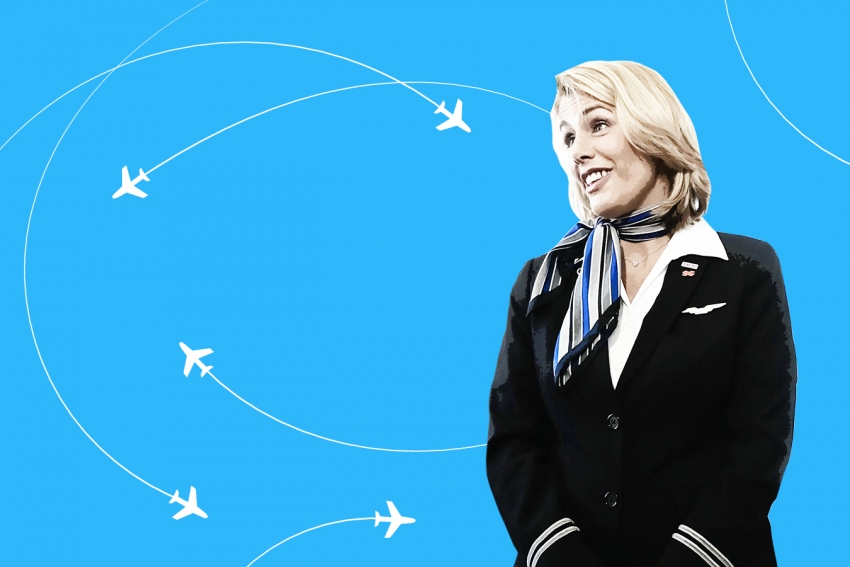 The Green New Deal Needs Labor’s Support. We Asked Sara Nelson How To Get It.

The president of the flight attendants union says stopping climate change and defending workers are part of the same fight.

Despite widespread support for the Green New Deal, an ambitious resolution to transform the economy and society to address the climate crisis, the labor movement is not uniting behind it. On March 8, the AFLCIO’s Energy Committee released an open letter to Sen. Ed Markey (D-Mass.) and Rep. Alexandria Ocasio-Cortez (D-N.Y.) criticizing the plan on grounds it “could cause immediate harm to millions of our members and their families.”

In contrast, some union locals have come out in support of the resolution, including the San Diego and Imperial Counties Labor Council, which noted in January that “climate change poses an immediate and long-term threat to all working people.” Groups like Climate Workers, a membership organization of rank-and-file workers, the Labor Network for Sustainability, a labor group that fights for ecological and economic justice, and the BlueGreen Alliance, a coalition of major unions and environmental groups, have spent years trying to bridge the labor movement and the movement for climate justice, but rifts remain.

The labor movement is divided precisely at a moment when it could ensure the passage of a Green New Deal rooted in justice, self-determination and union rights. The resolution’s call for a just transition emerges from the environmental justice, labor and Indigenous rights movements of the 1980s and 1990s. It is premised on the principle that the shift away from a fossil fuel economy must ensure workers play a lead role in the transition—and that workers are not abandoned in the shift to zero emissions. A jobs guarantee, universal basic income and protection of union rights—all floated as components of a Green New Deal—could play key roles.

In These Times called Sara Nelson, president of the Association of Flight Attendants-Communications Workers of America (AFACWA) and a rising star among union leaders, to discuss the idea.

Nelson captured national attention when she issued a strike threat in the midst of the Trump administration’s infamous government shutdown over border wall funding. Five days later, when some air traffic controllers on the East Coast did not show up for work, she told New York magazine that flight attendants were “mobilizing immediately” to strike. Hours later, Trump announced he’d reached a deal to temporarily reopen the government.

Nelson’s very public challenge has made her a leading contender to replace Richard Trumka as president of the AFL-CIO if he retires as expected, at the end of his term, in two years.

Nelson was born in Corvallis, Ore., to a teacher and a lumber mill worker. She majored in English and education, and applied for a flight attendant position in 1996 to pay the bills. She recalled to the New York Times that her six-week training included “make-up” day for women to learn how to apply mascara while men took the day off. An early pay dispute turned her into a union activist, and she became the union’s president in 2014. One of the few international union presidents who publicly aligns herself with Bernie Sanders, Nelson now works about one flight a year, devoting the rest of her time to her union.

Nelson hails from an industry that poses a problem to the goal of zero emissions: Passenger airplanes account for 1–2% of global carbon emissions, and air travel is expected to double in the next 20 years. Finding alternative energy sources for airplanes has proven trickier than for cars or electrical grids. At the same time, Nelson represents workers whose conditions have already grown more dangerous as the climate crisis has escalated. “Extreme weather is increasing instances of turbulence, which is a serious occupational injury threat,” Nelson notes.

The Green New Deal calls for us to “achieve net-zero greenhouse gas emissions through a fair and just transition for all communities and workers.” As a labor publication that cares a lot about climate change, we have been asking ourselves what a “just transition” could actually be. What do you think?

What would it take to build more labor movement support for the Green New Deal?

SN: Make labor central to the discussion, including labor rights, labor protections and labor expertise. We must recognize that labor unions were among the first to fight for the environment because it was our workspaces that had pollutants, our communities that industry polluted. Let’s not dismiss the labor movement. Let’s recognize and engage the infrastructure and experience of the labor movement to make this work.

The point here is that we need to build a broad coalition, and to do that we can’t start from a position that assumes opposition. If we bring everyone to the table, recognize the efforts to date, draw on the expertise from each affected field, and mobilize a united effort, then we can create allies where we otherwise might have had enemies.

Is increasing fuel efficiency enough? Because of more flights, total airline emissions are still expected to rise. Must flights decrease, and if so, how do we protect workers?

SN: I think … [laughs] I think that we have to be pretty clear that interstate commerce in the United States, international trade and transportation just don’t work without air travel, right? We can advance technology to help the airlines use an alternative energy source and there is both a moral and a cost incentive to do that.

What are the biggest lies opponents of the Green New Deal tell workers?

SN: The biggest lie is that the Green New Deal resolution is legislative policy and that it imposes certain strict requirements—for example with air travel, that every plane will stay on the ground in 10 years. There is not a flight attendant or pilot or anyone in aviation who actually believes that aviation is going to be grounded. That’s simply not true. The opposite is true. This resolution seeks to promote technological advancements and policies that will keep flights in the air. Today, airplanes are grounded because of severe weather events, sometimes for long periods because these events destroy infrastructure that is necessary to take off and land. Or, destroy the demand for those locations—there is nothing to fly to.

How can climate campaigners build bridges with organized labor?

SN: First and foremost, there has to be a recognition that labor has never seen an actual “just transition.” You can say those words all day long, but what people hear is “a couple hours of training and then you’re going to leave my community devastated and alone—like a ghost town.” So, there’s zero trust.

If you want to build trust, you need to do two things. One, you need to shore up the wasteland that’s already been created where there was no just transition. When new environmental regulations promoted low-sulfur mining, collection of coal moved from union mines in Appalachia to nonunion surface mines out West. No one addressed the communities that were hurt in the process. So miners are understandably skeptical.

Now coal companies have filed for bankruptcy and stopped contributing to healthcare and pension funds. We need to push to adopt legislation that keeps America’s promise to coal miners of pensions and healthcare, as well as addresses black lung— that’s the bare minimum to show good faith that this process of taking on climate change will focus on making coal miners’ lives better, not worse. Bipartisan legislation to fund pensions has had support for years, but Mitch McConnell has stopped it from getting to a vote. We can demand H.R. 934/935 and S. 27 get passed now, and show miners and others working in the fossil fuel industry that we’re on their side. My union, AFA-CWA, will be on the Hill with the United Mineworkers of America on May 8 to do just that. Everyone should get behind securing those pensions.

Second, a just transition needs to talk about how we start the transition process early. We need to get into these communities, talk with them about their needs, and get to know them. It’s important that we not write them off and say, “They just have to get over it.” Nobody is ever going to get over not being able to provide healthcare for their families and watching people die in poverty or lose their homes. So, let’s talk with the people about the jobs that are there and what those jobs also support in the community. Every good union coal mining job supports another five jobs in that community. So, we need to start talking about how we are going to put some of these jobs back into those communities. With new technology? With training? And how are we going to support people in the meantime? Who is going to be able to get retrained and learn a new career?

Is there anyone doing it right—centering on the needs of impacted workers?

SN: There’s the BlueGreen Alliance—people in labor who understand these issues and have been through the real horrific impact of lopsided trade agreements and the destruction of jobs, exacerbated further by the horrific tax bill, which created incentives for corporations to move work out of the United States. Both the United Steelworkers and CWA have tons of experience, and have long-standing records on addressing environmental issues in a meaningful way, hand in hand with the Sierra Club.

You mentioned fair trade—what would an international component of a Green New Deal look like?

SN: Taking on climate change is a global necessity. The United States can prioritize the principles of the Green New Deal in trade agreements. We should be clear that tackling climate change and promoting labor rights for good jobs is our priority, and we should be using our standing in the world to encourage other countries to join us.