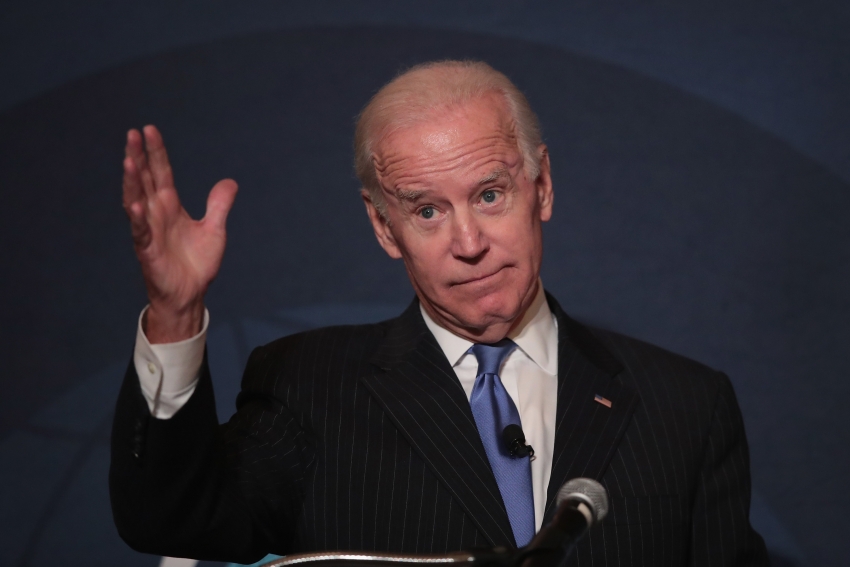 Joe Biden Is Railing Against Hedge Fund Managers, But He Has a Long History of Courting Them

Biden may cast himself as the champion of working people, but he’s seeking support from the same financial elite that he chides on the 2020 campaign trail.

The first time Biden publicly opened the door to a possible 2020 run, he was standing among figures from the hedge fund industry.

“The country wasn't built by Wall Street bankers, CEOs and hedge fund managers,” Joe Biden told a crowd at a Monday campaign rally held in a Teamsters hall, his first appearance as an official 2020 candidate.

This is likely a different message than what Biden has been sending to hedge fund managers themselves, whom he has spent the two years leading up to his announcement aggressively courting. These titans of finance capital have also been among Biden’s early supporters.

In fact, the first time Biden publicly opened the door to a possible 2020 run, he was standing among figures from the hedge fund industry. After months of flat out denials, Biden first admitted he “may very well do it” at the Skybridge Alternatives (SALT) Conference in May 2017, where he appeared as a keynote speaker. SALT is an annual conference bringing together hedge funds in Las Vegas organized and run by Anthony Scaramucci, the hedge fund operator who briefly served as President Trump’s White House communications director in 2017. While Biden is not listed as a speaker for this year’s SALT, his picture is still featured prominently on the front page of its website.

Attendees at the 2017 conference included billionaire investor Sam Zell, The Carlyle Group co-founder and Co-Executive Chairman David Rubenstein, hedge fund manager James Chanos, Milwaukee Bucks co-owner and Avenue Capital Group co-founder Marc Lasry, as well as a host of celebrities and political figures such as Karl Rove and Donna Brazile. Much of the coverage of the event at the time focused on Biden’s teased presidential run and his testy, possibly misreported exchange with billionaire hedge fund manager Bill Ackman. But Biden was well-received at the event, receiving a standing ovation from the 2,000-strong crowd of Wall Street bigwigs.

Biden’s speech reportedly painted an image of the kind of unified, cooperative American polity that tends to animate his worldview, one where competing interests work together and the country functions more as a singular team than one marked by class divisions. The United States had a plethora of research universities and the “most nimble” venture capitalists, he told the gathering. And while hoarding their wealth wouldn’t enrich the economy, he said, investing in education and other public goods would.

This wasn’t the only time Biden spoke alongside such an ultra-wealthy crowd that year. At an event at the University of Delaware in April 2017 to promote his Biden Institute—which describes itself as a “a research and policy center” aiming to “influence, shape, and work to solve the most pressing domestic policy problems facing America”—Biden convened a panel called “Win-Win: How the Long View Works for Business and the Middle Class.” At the panel, Biden was joined by various corporate executives and figures from the investment industry. He kicked things off by expounding on the virtues of a strong middle class, whose fate, he said, depended on “what companies decide to do with their profits”: invest them in “research, training, equipment” or plow them back into “shareholder payout.”

The eight-member panel—consisting of Biden, various corporate executives and two university associates—was critical of both corporate America, which they argued was driven to short-term thinking by fear of poor quarterly performance, and of hedge fund managers who pushed executives into such behavior.

Yet several of these panelists were themselves members of the hedge fund world: Carsten Stendevad of Bridgewater Associates, which recently topped the list of the world’s biggest and most profitable hedge funds; Sarah Williamson, a former partner and 21-year veteran of hedge fund manager Wellington Management Co. who sat on its Hedge Fund Oversight Committee; Charles Elson, a finance professor at the university who just months before was nominated to run a hedge fund; and Mark Wiseman, the Global Head of Active Equity at BlackRock, the world’s largest asset manager with billions of dollars invested in hedge funds, in which the firm is increasing investment.

The following year, Biden looked partly to the hedge fund world to fill out his institute's Policy Advisory Board, adding former hedge fund boss and major Obama bundler Eric Mindich as well as a number of employees and veterans of firms such as BlackRock, Morgan Stanley and JP Morgan Chase. The Advisory Board’s mission involved drafting “a set of new policy ideas to make sure Americans are able to obtain quality jobs that will grow the middle class and our economy.” Mindich, for his part, has also promised to help Biden raise money for his current campaign.

Such events continued into 2018. Early that year, Biden reportedly attended a fundraiser at the home of Laetitia Garriott de Cayeux, a career-long hedge fund executive, and was the special guest at a $10,000 per person dinner for House Democrats at the aforementioned James Chanos’ home. Chanos, a billionaire who made his fortune by betting on the fall in value of company stocks, has said Biden would “make a great president” and “hits a chord with the middle class,” pledging to “support him any way I can.”

Meanwhile, Florida billionaire Marsha Laufer, whose husband Henry served as an executive at the $57 billion hedge fund Renaissance Technologies, had kind words for Biden before he joined the race, saying he represents “stability of government, truth and values in a traditional sense that people are longing for,” while expressing fear about the Democrats’ leftward shift.

It appears Biden may be returning to this well even after taking a rhetorical jab at “Wall Street bankers, CEOs and hedge fund managers.” Some of those slated to attend an LA fundraiser for Biden next month include: Richard Blum, hedge fund manager, private equity investor and husband of California Sen. Dianne Feinstein;  James Costos, board member of PJT Partners Inc.; and Martha Karsh, whose husband, Bruce, co-founded private equity firm Oaktree Capital.

Biden’s closeness to the industry is nothing new. A 2015 letter signed by nearly 50 Democratic Party donors and activists urging Biden to run for president the following year featured longtime hedge fund manager Jim Torrey as well as other finance executives. Biden’s 2008 presidential campaign was fined $219,000 by the FEC partly because three members of the campaign took a flight on a private jet owned by the Clinton Group, a New York-based hedge fund. And Biden’s son Hunter was previously chairman of Paradigm, a now-defunct fund of hedge funds he ran alongside Biden’s brother, James.

Alongside this relationship to hedge funds, Biden has been heavily courting labor union support for his presidential run. He opened his campaign with an endorsement from the International Association of Fire Fighters, has spoken in union halls and in front of union audiences in the lead up to his run (including on the day he announced), and recently said that “I make no apologies—I am a union man.” This is despite union antipathy toward hedge funds, which have a history of depleting pension funds through poor performance and exorbitant fees.

These events suggest the contours of what Biden’s campaign and potential governing style may look like. Biden will likely continue seeking the support of unions while playing up his working-class, Scranton roots in public speeches, while quietly courting hedge fund managers and other corporate and Wall Street executives for funding.

Meanwhile, unlike Bernie Sanders, one of his chief rivals for the Democratic nomination who frames the relationship between corporate America and working people as antagonistic, these episodes suggest Biden sees this relationship as a fundamentally cooperative one.

As Biden said at the Brookings Institution in May 2018, “I’m not Bernie Sanders. I don’t think 500 billionaires are the reason why we’re in trouble.” He went on to say, “The folks at the top are not bad guys… wealthy Americans are just as patriotic as poor folks.”

In this view, Wall Street and corporate executives serve as key stakeholders who must help shape government policy, with Biden acting as a kind of broker between them and the rest of the public. It’s an approach not dissimilar from that taken by previous Democratic presidents in the post-Reagan era.

But can such a coalition of the working class and ultra-rich executives hold together throughout the campaign, particularly at a time of populist anger and historic wealth inequality? With a dangerous billionaire real estate mogul in the White House, that’s one risky proposition.