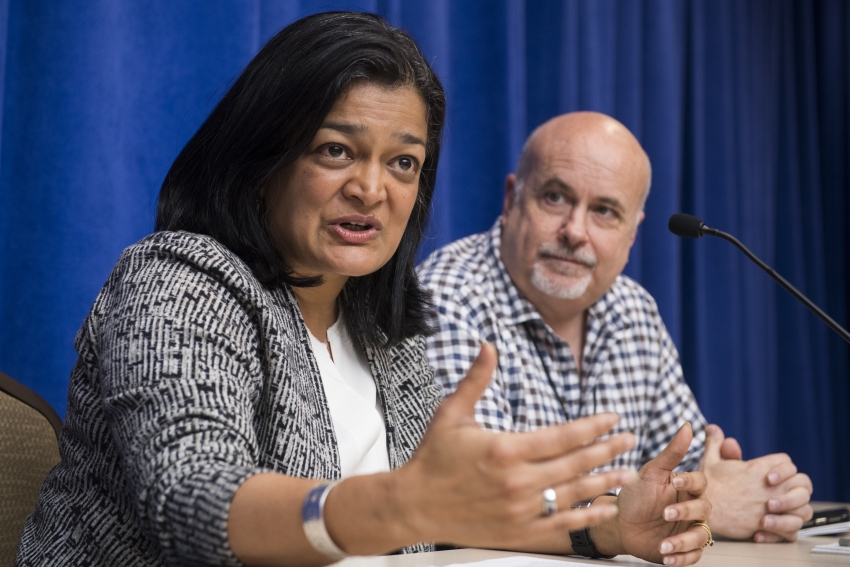 Reps. Pramila Jayapal, D-Wash., and Mark Pocan, D-Wis., talk with the media at the Lansdowne Resort and Spa in Leesburg, Va., on Thursday, April 11, 2019. (Photo By Tom Williams/CQ Roll Call)

Support for a program like Medicare for All should stem from the principle of solidarity—that an injury to one is an injury to all. The same solidarity should be extended to the lives of the tens of thousands of Yemeni people dying in a U.S.-backed war.

House Progressives have fashioned what they may see as a pragmatic response to the unconscionable budgeting priorities of a U.S. government that pours money into the Pentagon while constricting public goods like housing assistance and education. The chairs of the Congressional Progressive Caucus, Reps. Pramila Jayapal (D-Wash.) and Mark Pocan (D-Wis.), proposed in April that spending caps for discretionary domestic programs should be raised in 2020 to match the discretionary military budget.

Pocan and Jayapal’s approach would, indeed, mark a departure from the modus operandi of Congress, which reliably sets higher ceilings for military spending than for domestic. But by tethering progressive programs to war spending, this plan abandons the moral priority to oppose U.S. imperial ambitions. Progressives cannot build domestic gains on the backs of people in the Global South. No amount of domestic spending could justify the size of the Pentagon, the largest military empire humanity has ever seen.

Progressives are eager to find funding for bold, popular programs like a Green New Deal and Medicare for All, and are chafing at the constraints of the Budget Control Act of 2011, a compromise by the Obama administration: Republicans agreed to raise the debt ceiling in exchange for limits on discretionary defense and non-defense spending (which, in practice, has led to far more constraints on the latter). Lindsay Koshgarian, program director for the Institute for Policy Studies’ National Priorities Project, a budget-focused nonprofit, puts it this way, “Every couple of years [the act has] meant a deal with more Pentagon funding and a little more funding for everything else.”

The Congressional Progressive Caucus chairs are pitting themselves against centrist leaders in their own party, including Budget Committee Chair Rep. John Yarmuth (D-Ky.), who rallied Democrats behind a budgetary plan that would increase discretionary defense spending caps to $664 billion in 2020 and non-defense spending to $631 billion. The split came to a head April 9, in an episode the Washington Post called a “liberal revolt” by House progressives, when Jayapal and Pocan introduced an amendment to increase the domestic cap by $33 billion to bring it in line with the military cap. “Here’s a real opportunity to tell people we are investing in their future and not in a Pentagon,” Jayapal said.

But Democratic leaders rejected the amendment on the grounds that it wasn’t fiscally prudent, and ultimately canceled the vote.

To be fair, dollar-for-dollar parity between domestic and military spending wasn’t every progressive Congress member’s first choice. During the initial House Budget Committee hearings on Yarmuth’s proposal, Rep. Ro Khanna (Calif.) put forward an amendment to freeze defense spending at 2019 levels, which gained the support of six other Democrats, but was voted down. Reps. Jayapal, Khanna and Ilhan Omar (Minn.) then voted against the Yarmuth plan, the only three House Democrats to do so. “This is a key philosophical moment for our party,” said Khanna. “We cannot be against endless wars and then fund those wars.”

But even if the Pentagon budget were frozen, it still constitutes, by far, the biggest military budget of any nation in the world—roughly the size of the next seven combined. Military spending has increased for four years straight, climbing from $586 billion in 2015 to $716 billion in 2019 (an inflation-adjusted increase of $85 billion, or 13%). The money funds a global empire, with 800 military bases, active and reserve troops stationed in at least 172 countries and territories, and U.S. commandos deployed in 75% of the world’s countries. According to one estimate, the 2003 U.S. invasion of Iraq resulted in the death of 1 million Iraqi people. Since 2014, the U.S.-led military coalition against ISIS has killed up to 12,000 civilians in Iraq and Syria. U.S. military bases, for their part, erode nations’ self-determination, are associated with environmental harm and sexual violence, and fuel proxy wars, which can be ruthless.

And yet, at a time when aspirational, socialist-leaning programs are taking the national stage, left demands to reduce the U.S. military footprint have nowhere near the same momentum. This puts us in danger of repeating a long history of liberal and left chauvinism—a belief in the superiority of one’s compatriots that enables progressive policies at home and brutal wars abroad to go hand in hand.

The last significant outburst of progressive domestic reform—Lyndon Johnson’s “war on poverty,” beginning in 1964—saw the creation of Medicare, Medicaid, food stamps and the National Endowment for the Humanities, with aspirations for what Johnson called “The Great Society.” From 1965 to 1968, the U.S. budgeted $2.64 billion in new local welfare programs—a 25% increase over 1962 levels. The U.S. also budgeted an increase of 30% for the Defense Department budget, to $76.5 billion.

Those additional billions financed military expansion—and mass atrocity. As Johnson declared war on poverty, he also greenlit tens of thousands more U.S. troops into Vietnam. With the Gulf of Tonkin Resolution, Johnson went all in on a war that between 1965 and 1974 would leave an estimated 1.7 million Vietnamese dead.

According to Margaret Rung, professor of history at Roosevelt University (and board president of In These Times), Johnson “wanted to take the Great Society and export it to the rest of the world, especially parts of the world that might turn to Communism. In [Johnson’s] mind, they were all part of the same project.” In a 1965 speech, Johnson laid out plans for economic development in Vietnam, including a Mekong River Delta Project, inspired by the Tennessee Valley Authority. Three years later, that delta would be the site of the U.S. military onslaught “Operation Speedy Express,” which took the lives of more than 10,000 Vietnamese people and gave U.S. Major General Julian Ewell the epithet, “Butcher of the Delta.”

Similarly, Pierre Laroque, considered the “father of social security” in France in the aftermath of World War II, argued for a “universal welfare state” that incorporated French colonies, from Algeria to Senegal, providing ideological fodder for ongoing violent colonization. Just over a decade later, Socialist Prime Minister Guy Mollet would bring a wave of progressive domestic reform to France at the same time that he escalated the war to crush Algeria’s struggle for independence, deploying 200,000 more troops who engaged in systematic torture.

Domestic and military spending caps remain unresolved in ongoing budget negotiations. The Congressional Progressive Caucus has yet to release its annual People’s Budget, where it has the opportunity to draw a hard line against military spending. Support for a program like Medicare for All should stem from the principle of solidarity—that an injury to one is an injury to all. The same solidarity should be extended to the lives of the tens of thousands of Yemeni people dying in a U.S.-backed war.

We need to oppose war spending with the same gusto we push to expand public goods, on the grounds that lives beyond U.S. borders matter just as much as those within. By failing to root domestic demands in anti-imperialist principles, we risk repeating the horrors of the past—and present.