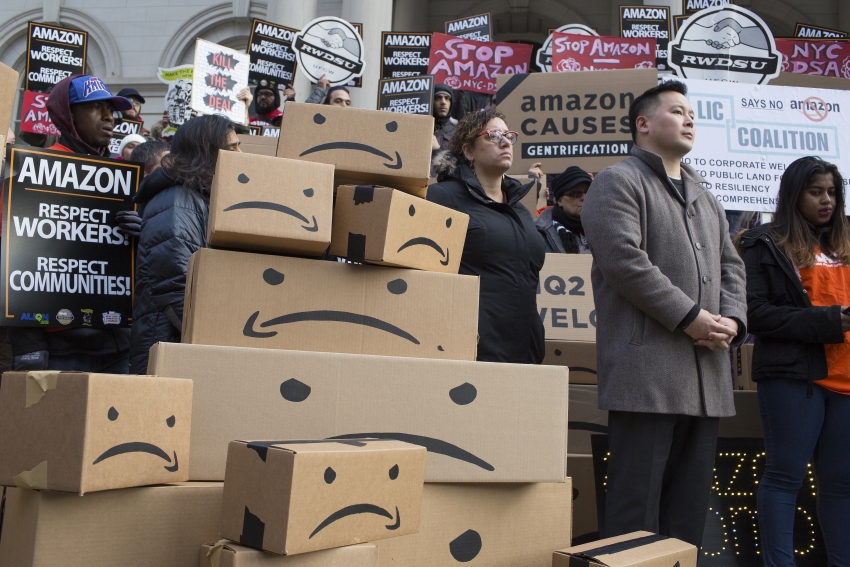 On Dec. 12, 2018, activists and politicians gathered outside of City Hall to protest Amazon’s plan to build a new headquarters in New York. (Photo by Andrew Lichtenstein/Corbis via Getty Images)

A nationalized Amazon could be put to use in building a more equitable, democratic economy.

A nationalized company could play the backbone of a more equitable system.

This piece is a response to “Some on the Left Want To Nationalize Amazon. Breaking It Up Is a Safer Bet.”

What should be done with Amazon? While some parts of the company should indeed be broken up, its sprawling scale is not its only problem. Much of what Amazon does is harmful for reasons inherent to the logic of private ownership, and would remain so at any scale. While the public probably does not need to own, say, The Marvelous Mrs. Maisel, much of Amazon can and should be nationalized and put to use to build a democratic economy.

David and others suggest that breaking up Amazon would restore some semblance of market fairness and that regulatory action could keep the power of its remnants in check. But historically, breakups of monopolies have been relatively inefficient. The Bell System, led by AT&T, was broken apart in 1984 and is today on track to be even larger, as the AT&T-Time Warner merger proceeds. Antitrust mechanisms can temporarily roll back monopolies, but the preference to dominate, rather than compete, survives.

Even should antitrust action succeed, it’s not clear that restoring competition would be better for society at large in the case of Amazon’s primary application—connecting buyers with sellers. Online platforms attain a natural monopoly when a certain level of market share is achieved and competition becomes next to impossible. What little competition among platforms remains doesn’t produce better outcomes, but instead creates a race-to-the-bottom to cut costs. Take Amazon’s new promise of one-day delivery; Walmart quickly followed suit. While it might appear convenient, neither entity has to account for the intensifying extraction from workers and the environment; both can continue to externalize these costs. Profit-driven private ownership of the Amazon marketplace will continue to create “innovation” at the expense of public good.

While David does suggest that the Amazon marketplace could operate under public ownership, he doesn’t seem to see the significance of such a “nationalized digital mall.” Amazon’s ownership of this digital mall is what allows its success, using its primacy to extort and manipulate the market in its own interests. It is Amazon’s profit imperative, not an inevitable function of a marketplace platform, that drives it to pressure third-party sellers, squeeze workers, and recommend products that fail consumers. By becoming the market, Amazon has effectively become the market’s regulator. Such powers should belong to the public.

Democratic public ownership of the marketplace platform could retool this infrastructure for public good. The People’s Amazon—call it Ourmazon—could guarantee access to the marketplace for smaller producers rather than driving down the cost of their goods and services. As a public distribution network, Ourmazon could stabilize prices at a point that ensures viability and competitiveness for small businesses at a cost that benefits consumers.

Critics of nationalization contend that the government would be forced to adopt Amazon’s extractive practices to operate at an enterprise scale. But if those practices are indeed necessary for efficiency, why would new regulations produce different outcomes? A nationalized platform could shift the definition of efficiency to include metrics beyond shareholder value.

One of Amazon’s key (and controversial, due to real privacy concerns) features is the massive amount of data it harvests and leverages to maximize its profits. In its current position, Amazon picks winners and losers for its own ends, with algorithms that impact prices, order search results and collate recommendations. That data could instead be optimized for a wide array of economic priorities, from reducing greenhouse gas emissions to hobbling products with labor abuses in their supply chains. A nationalized entity, managed along democratic priorities, could advantage small businesses, unionized businesses, or worker-owned businesses.

Amazon is dominating its way to becoming the backbone of the U.S. economy. A nationalized company could play the backbone of a more equitable system. As Amazon expands into activities like providing easier-to-access credit cards, it is creating new markets out of sectors that would be better served with social provisions. Similarly, look at Amazon’s move into online pharmacy. We can imagine how powerful a publicly owned pharmacy could be, expanding access to affordable medication, driven by care rather than profit.

The flaw of antitrust is that the problem of power is reduced to a matter of scale, when power should be rooted in democratic control and ownership. Who owns the data? Who programs the algorithm? Who governs the platform? Breaking up Amazon may be necessary, but some of its pieces would inevitably become natural monopolies that would be better served as publicly owned platforms operated for public benefit. Public ownership of Amazon would enable a redesign to maximize public benefit over profit.

For another perspective, read “Some on the Left Want To Nationalize Amazon. Breaking It Up Is a Safer Bet.”