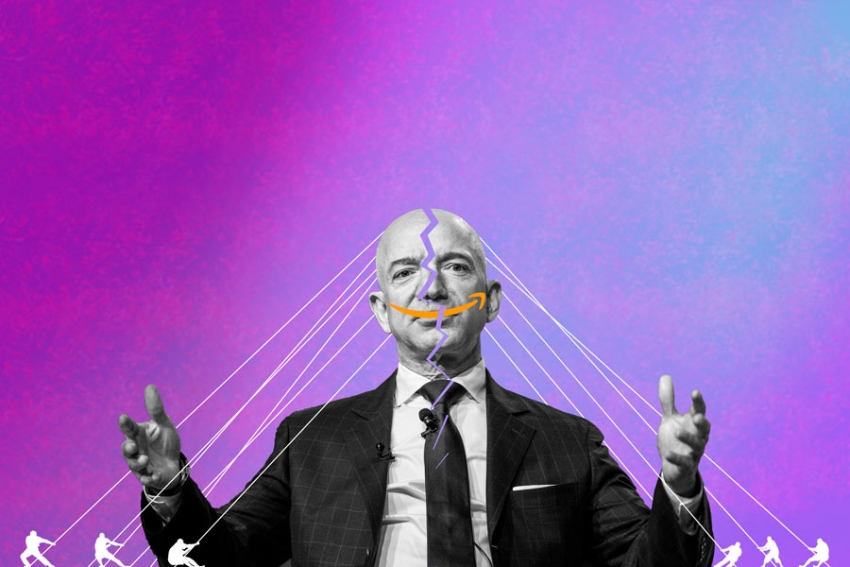 Some on the Left Want To Nationalize Amazon. Breaking It Up Is a Safer Bet.

Antitrust action has worked in the past. We can use the same model against Amazon.

We must eliminate Amazon’s dominance at the center of all these economic transactions.

For another perspective, read “Breaking Up Amazon Doesn’t Go Far Enough—We Must Put It Under Public Control.”

Ninety years ago, regulators were considering what to do about the Great Atlantic & Pacific Tea Company, which you might remember as A&P. By 1930, A&P had almost 16,000 grocery stores around the country—nearly four times as many U.S. stores as Walmart has today, serving a U.S. population about a third as large.

A&P used its tremendous size to force suppliers to sell to it for less, then priced its items artificially low to destroy its competition. It bought a milk company and a bakery and owned its own wholesale operation, known as ACCO, to sell fruit and vegetables to both A&P and its competitors. Food sellers paid kickbacks, known as “advertising allowances,” for the privilege of being stocked on A&P shelves. A&P was viciously anti-union, closing all its Cleveland stores after workers went on strike.

It all sounds a lot like Amazon today, with its buying power, predatory pricing, union-busting and vertical integration. So how did the government handle A&P? By splitting it up. The Robinson-Patman Act of 1936 banned chain stores like A&P from purchasing inventory from suppliers at lower prices than other retailers, and from asking for advertising allowances. The Miller-Tydings Act further prevented predatory pricing. Some states implemented chain store taxes, and a federal complement almost passed Congress. After decades of pursuit, prosecutors won a criminal antitrust case against A&P in 1946, resulting in fines; a civil antitrust case ending in consent decree led to A&P dissolving ACCO in 1954.

The same breakup model could work for Amazon: We could sue for anti-competitive practices under current predatory pricing statutes, split off Amazon’s product lines from its marketplace business (as Elizabeth Warren has suggested), and lop off unrelated business lines (such as Amazon Web Services) and the competing businesses it absorbed (such as Zappos)—the way Bell Telephone Company was split up in the 1980s.

Others on the Left propose nationalizing Amazon instead, putting its size and planning prowess toward the public good, but I am skeptical the country would benefit.

Amazon is definitely a logistical marvel, capable of delivering any of a million products to anywhere in the U.S. within days (if not hours). If the Soviet Union failed at producing enough goods, the theory goes, then modern socialism could instead just piggyback on Amazon’s efficient systems and direct them through public ownership.

But this takeover would also mean co-opting how Amazon makes its system work: bullying suppliers, third-party sellers, workers and partners. In particular, forcing lower margins onto suppliers seems to be a feature of any large efficient organization, from Amazon to Walmart. If the government isn’t getting into the processed food and sundries production business, then it will have to determine what to pay those suppliers—many of which currently outsource manufacturing abroad under harrowing conditions, paying workers next to nothing. Do we want a state-owned Amazon at the wheel of such misery?

Perhaps the United States of Amazon could reverse the process, pay suppliers reasonably, refuse to do business with sweatshops, and transform the global supply chain through its dominance. But would it be able to replicate the enterprise with the same advantages of low prices and rapid delivery? Or is exploitation built into, and unseverable from, this system of logistics? Could a public-controlled Amazon even function?

There’s a better known option out there, built upon historical evidence. Most of the things we may not like about Amazon—its treatment of workers, its carbon emissions, its use of low-wage labor, its fantastic riches for executives—could be dealt with through regulatory action and competition policy. Some politicians have already figured this out, as when Bernie Sanders pressured Amazon into paying its workers better.

Quality doesn’t have to suffer in the absence of Amazon’s exploitative model. While a state-owned Amazon would be torn between the competing imperatives of low prices and better conditions for workers and suppliers, perhaps competition between a panoply of sellers—with guardrails to prevent exploitation—could find an equilibrium with everyone sharing the benefits.

To get there, we must eliminate Amazon’s dominance at the center of all these economic transactions. We can create a playing field that gives workers and suppliers a fair chance at a reasonable wage for their goods and services without paying crippling rent to a middleman.

Because, ultimately, that’s what Amazon is: an intermediary. There may be a case for the government to run a listing website for distributors to sell and ship directly to buyers, but that wouldn’t really be a nationalized Amazon so much as a nationalized digital mall. At that point, you’re talking about breaking up Amazon anyway.

There are certainly sectors where the public provision of goods would be superior. I support government-provided health insurance for everyone, a public option for banking, and something like Sanders’ plan to give workers at large businesses a regular dividend from profits and some ownership of business stock. None of these ideas require the government to run a large logistical operation, hire customer service staff to handle complaints, manage the chaos of 2.5 million product sellers, manufacture devices, and so on. Maybe it’s better that way.

For a response to this piece, see “Breaking Up Amazon Doesn’t Go Far Enough—We Must Put It Under Public Control.”