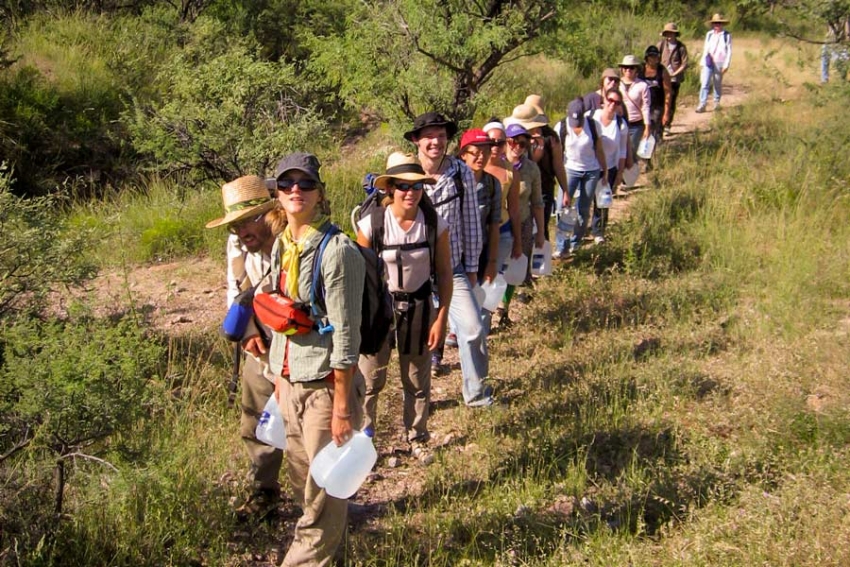 10 Years of Death by Border Patrol

Humanitarian aid for migrants crossing through dangerous deserts has been a crime for years.

In 1994, Border Patrol implemented its “Prevention Through Deterrence” strategy, ramping up enforcement at popular entry points along the U.S.-Mexico border and funneling migrants into more dangerous desert areas. This strategy intensified under President George W. Bush with a hiring surge of roughly 8,000 Border Patrol agents from 2006 to 2009.

As a direct result, significantly fewer of those who cross into the United States from Mexico have lived to tell the tale: An untold number have died of thirst trying to traverse the deserts that flank the border. Responding to this crisis, the Tucson-based group No More Deaths began organizing brigades of volunteers to leave jugs of water in the Sonoran Desert for dehydrated migrants.

As In These Times reported in September 2009, what is lifesaving liquid for migrants is a crime against the state for others. In “Litterers or Life-Savers?” Kari Lydersen wrote:

Walt Staton faces up to a year in prison and a $10,000 fine for littering.

Though he doesn’t expect to actually get jail time, the 27-year-old Tucson web designer still thinks the charges are ironic and disproportionate. Staton says that when he was cited in December 2008, he was actually picking up trash while also leaving full water jugs in the Buenos Aires National Wildlife Refuge along the Mexican border.

Staton is a member of No More Deaths/ No Más Muertes, a border activism group that leaves water along trails for migrants crossing through the harsh, unforgiving Sonoran Desert. About 50,000 migrants cross through the wildlife refuge each year, down from about 250,000 since a seven-mile stretch of a 12-foot-tall fence was built along the border there, according to refuge manager Michael Hawkes. …

In February 2008, No More Deaths volunteer Daniel Millis found the body of a 14-year-old Salvadoran girl. (The cause of death is unclear.) Two days later he was cited for littering while leaving water jugs on trails. He refused to pay the $175 ticket. …

In early August, a judge sentenced Staton to one year of “unsupervised probation.” During that period, he “must complete 300 hours of community service focusing on trash removal from public lands.”

Fast forward to 2019. In These Times reported that, on January 18, federal magistrate judge Bernardo Velasco found four more No More Deaths volunteers guilty of littering, or, as he put it, defiling “pristine nature.” One of the so-called litterers, Zaachila Orozco, testified during the trial: “I didn’t understand that humanitarian aid was criminal.”

Apparently it is. Separating children from their parents and locking them up in cages, however, is perfectly legal.