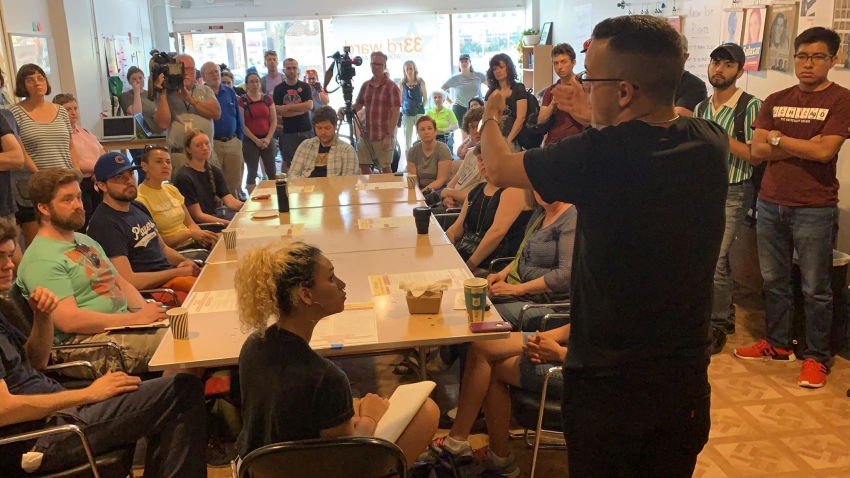 When ICE Comes for Their Neighbors, These Community Defense Brigades Will Be Ready

In the era of Trump, communities are organizing foot and bike patrols to protect their neighbors against immigration raids.

While patrols aren’t ubiquitous at this point, various forms of rapid response have become more common in the Trump era in large cities and smaller suburban and rural areas as well.

Faced with president Donald Trump’s escalation of some of the country’s worst immigration policies—massive Immigration and Customs Enforcement (ICE) raids, the Muslim ban, and tearing migrant children from their families at the country’s southern border—activists and community organizers have rallied behind immigrant communities. One key element of the fightback is the community defense patrol, a rapid response tactic designed to quickly react to ICE activity. Following the recent mass workplace ICE raid in Mississippi, in which 680 people were arrested, the critical need for community education and rapid response to ICE is all the more evident.

Although the specifics of the tactic may vary at different times, community defense patrolling involves groups of activists walking, biking or driving around specific locations where people endure high risk of being arrested by ICE. With the threat of ICE ever-present in immigrant communities, patrol participants organize to monitor areas where raids and arrests may happen. Their physical presence in vulnerable locales facilitates a rapid response to help defend people targeted by ICE. Community defense patrols have been common historically, though new instances of these patrols are emerging again in response to Trump’s repeated threats of large-scale ICE raids this summer.

On July 14, after the Trump administration threatened massive ICE raids in major cities, locals patrolled neighborhoods the north and south sides of Chicago. In the Albany Park neighborhood, the office of 33rd Ward Alderwoman Rossana Rodríguez-Sanchez, a Democratic Socialist, and neighborhood groups such as Organized Communities Against Deportations (OCAD) and the Albany Park Defense Network, joined together to organize community defense brigades. In Chicago’s Pilsen neighborhood, local groups—among them Pilsen En Defensa and the Pilsen Alliance—also organized patrols. In each neighborhood, organizers created a volunteer schedule with three shifts, ensuring that crews patrolled the areas for most of the day.

Lilia Escobar, the neighborhood services coordinator for Rodríguez-Sanchez in the 33rd Ward, says that the office wanted to have an “immediate response to an attack” on people who live in the neighborhood. Locals who signed up to participate in the patrols were given a training hosted by the group 33rd Ward Working Families, divided into smaller groups, and sent to walk or bike around specific sections of the neighborhood to monitor for ICE activity. No verified ICE activity was spotted that day, but participants were instructed to record any incident involving ICE, alert the 33rd Ward Working Families Office and an Illinois hotline designated for reporting suspected ICE activity, and also to inform anyone being arrested of their rights if possible.

“The most immediate goals of the defense patrols is to inform the community of their rights and to build a trained network of community members on standby to monitor and respond to any potential ICE, Homeland Security Investigations or Customs and Border Protection activity as quickly as possible at all times,” Diego Morales, an organizing member of Pilsen En Defensa, tells In These Times. “We want to ease the fears of our undocumented neighbors by showing them that the community they live in has their backs.”

This tactic has also been used this summer in New York City. One organizer with the rapid response group OPERATION ICE POP, who wished to remain anonymous, says that they have been helping to put community defense patrols together to counter ICE acti­vity because “standing around and doing nothing is no longer an option” given the Trump administration’s heightened anti-immigrant policies.

In early June, the group had patrols monitoring for ICE activity in all five of the city’s boroughs. Members of the patrols used various means of transportation including driving in cars, riding on public transit, walking around the streets and even cruising around on skateboards. The organizer says that on one occasion during this time, ICE agents attempted to arrest people, but failed to do so because the targets of the arrest asserted their right not to allow ICE inside their residence. After the community was alerted to the presence of ICE, members of the New Sanctuary Coalition, a group that offers various kinds of support such as accompanying immigrants to court dates and rapid response, arrived to the scene to hand out flyers.

In the Pilsen neighborhood of Chicago, Morales tells In These Times that “much of the inspiration for these patrols was taken from the cop-watching neighborhood patrols the Black Panther Party of Chicago organized in the 60’s to protect their people from racist police brutality.”

Indeed, community defense patrolling has been a popular tactic for marginalized groups under siege in the past. In the 1960s the Black Panther Party—originally named the Black Panther Party for Self-Defense—famously organized armed patrols in cities from Oakland, California and Philadelphia, Pennsylvania to defend Black people against police brutality. Members of Queer Nation later created the Pink Panther Patrol of New York City, also inspired by the Black Panthers, to deter anti-gay violence in the city’s East and West Village neighborhoods in the 1990s. This patrol model spread to San Francisco as well.

Community patrolling has also lately been in use abroad in response to deportations. The Anti Raids Network in the UK facilitates an expanded version of community defense patrolling. Rather than using organized groups that take shifts patrolling specific locations, this model encourages vigilance against deportation forces at all times. The Network mainly consists of a website and a Twitter account, the latter of which is set up so that anyone who sees an immigration vehicle can alert the account, which then blasts the information out on social media. The Anti Raids Network has published a number of reports from bicyclists who have successfully thwarted deportation activity in the last few years.

Broad education around how to intervene during arrests or raids at any time is an important component for the sustainability of the community defense patrolling. It’s not necessarily feasible to always have large enough groups of people in every vulnerable area at all times, but it is possible to organize and educate communities so that a vast number of people will know what to do in the moment when raids or other arrests occur, announced or otherwise.

Chicago organizers have an eye toward expanding community defense in similar ways. Chris Poulos, the chief of staff for Rodríguez-Sanchez, explains that their office wants to grow the definition of neighborhood services so that it includes things like a rapid response to ICE activity. In the Pilsen neighborhood, Morales says that Pilsen En Defensa wants to increase the use of community patrolling to the extent that it becomes common practice whenever someone is out and about in a vulnerable area. “With a sizable amount of the community educated on rapid response as part of our network, a walk to the bodega becomes a patrol. A morning commute becomes a patrol. A barbecue at the park becomes a lookout,” he says.

While patrols aren’t ubiquitous at this point, various forms of rapid response have become more common in the Trump era in large cities, and smaller suburban and rural areas as well. Around the country, immigrant rights organizations have established hotlines that people can call if they are subjected to or witness ICE activity. In Washington State, the Washington Immigrant Solidarity Network (WAISN), a coalition of immigrant rights organizations and activists, established a hotline for reporting ICE activity. Since the creation of the hotline, the coalition has trained people in verifying ICE activity and addressing the situation accordingly.

Ann Reeves, a board member of Pacific County Immigrant Support (PCIS) in southwest Washington, says that 28 members of the organization have participated in trainings with WAISN so that they can provide a rapid response to activities reported to the WAISN hotline. Beyond rapid response, PCIS supports immigrants and the families of immigrants who are suffering due to anti-immigration policies. The Trump administration’s ever-changing and accelerated attacks on immigrants has presented immigrant communities and their allies with significant challenges. But Reeves says, “Seeing the large outpouring of support and good wishes from the community gives us hope for the future.”