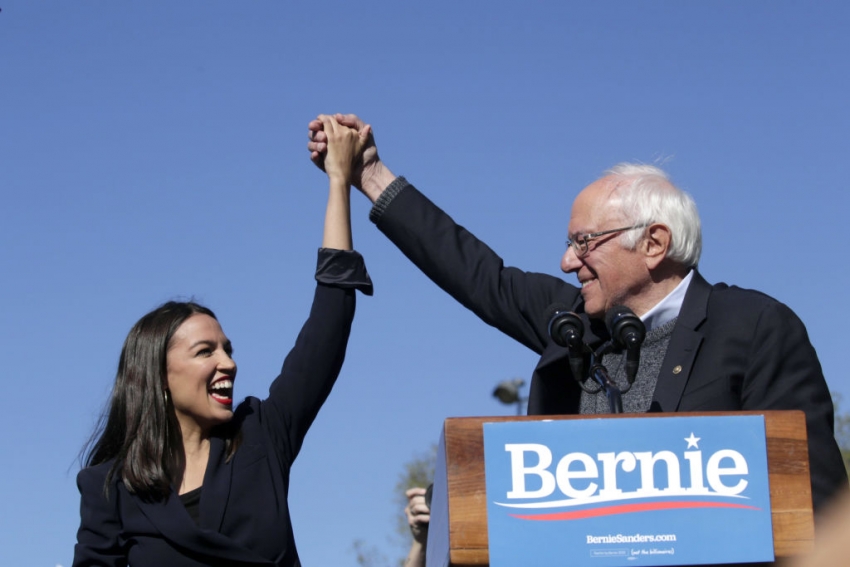 You can’t trust anyone over 30 years in office. Except maybe one.

An aging elite is refusing to “pass the torch”—and using that torch to set the planet alight. As Greta Thunberg asked: How dare they?

Young people are badly underrepresented in the U.S. government. The average age of Senators is currently 63, a full 25 years older than the median U.S. resident. In the House, it’s 58. The four leading presidential contenders, including Trump, are all in their 70s. Joe Biden was first elected to the Senate in 1972—he has been one of the planet’s most powerful people for nearly half a century, longer than most have been alive.

Politics is often construed as noble public service, but it is also a tremendous privilege. Federal officeholders wield power over not only U.S. voters but also many who have no say in our elections, including residents of other countries and those under 18. In fact, climate change, nuclear war and environmental pollution have the potential to affect all life on this planet for centuries if not millennia to come.

Probably no single government should have such power. At the least, a supposed democracy should share this power as widely as possible. In reality, most ordinary people never get near it.

Over time, this power corrupts. As Rep. Alexandria Ocasio-Cortez (D-N.Y.) reports: “Behind closed doors, your arm is twisted, the vise pressure of political pressure gets put on you, every trick in the book, psychological and otherwise, is used to get us to abandon the working class.”

“As a consequence of my fundraising I became more like the wealthy donors I met,” wrote Barack Obama of his 2004 Senate campaign in The Audacity of Hope. “I spent more and more of my time above the fray, outside the world of immediate hunger, disappointment, fear, irrationality and frequent hardship of the other 99%. … I suspect this is true for every senator: The longer you are a senator, the narrower the scope of your interactions.”

The ancient Athenians would have agreed. They believed elections favor the wealthy and influential, instead appointing (male, non-slave) citizens to political positions for one-year terms through random selection.

Despite high-profile successes such as the victory of Ocasio-Cortez (age 30) over Joe Crowley (age 57), most Congressional incumbents can rest relatively easy, with well above an 80% likelihood of reelection. What we get is an insulated class of professional politicians, propped up by a relatively wealthy and old donor class. As Astra Taylor argues in the New York Times, structural obstacles from age limits to economic precarity to the Senate’s rural-state bias hinder young people (who disproportionately live in cities) from entering politics.

On the surface, this may seem only a modest injustice—can’t millennials just wait our turn? But the importance of youth representation becomes clear when you begin to consider climate change: The old folks in Congress will die before the worst impacts hit. (While the elderly poor are already getting slammed by heat waves and storms, the elderly poor are not who sit in Congress.) They can dismiss youth-led calls for a Green New Deal as a “green dream, or whatever” (Nancy Pelosi, 79), knowing they will be safely in the grave while future generations struggle to make a life among the wreckage. An aging elite is refusing to “pass the torch”—and using that torch to set the planet alight. As Greta Thunberg asked: How dare they?

Of course, age should not be the only factor in making our presidential decisions. It is perhaps ironic that the oldest candidate, Bernie Sanders, has the most ambitious plan to rein in climate change, student debt and war, all issues disproportionately affecting the youth; he also eschews corporate fundraising and, according to Ocasio-Cortez, who recently endorsed him, has maintained “consistent and nonstop advocacy” for the 99% despite his 34 years in elected office. This is probably why the vast plurality of millennials planning to vote in the Democratic primary—this author included—back him.

It is probably not coincidence, however, that the long-tenured Sanders has been reluctant to embrace such institutional reforms as abolishing the filibuster or expanding the Supreme Court. Several younger candidates, such as Pete Buttigieg (37) and Kamala Harris (55), are much more open, as is Elizabeth Warren (70). Their relative youth and newness to politics may give them a fresher perspective on how government should be operated. (Warren, although just eight years younger than Sanders, has only held elected office since 2013.)

In fact, Buttigieg, the youngest candidate at 37, introduced “intergenerational justice” as a campaign theme and has voiced the strongest support for court packing. (Unfortunately, the details of his court-packing plan are needlessly convoluted and, like his whole campaign, leave much to be desired.)

Sanders’ other electoral weaknesses—his improved but imperfect messaging around race and gender; baggage and old grudges from 2016 (not totally his fault); concerns about his heart—also correlate with age and length of time in politics. All of this suggests that “passing the torch” to a younger, more diverse suite of left politicians will need to happen sooner than later.

It is to his credit that Sanders is doing this, both directly and indirectly. The organization that came out of his 2016 campaign, Our Revolution, is actively working to build up new progressive leadership at every level of government. And many of the young people mobilized by that campaign have gone on to hold office, from Ocasio-Cortez to socialist Chicago alderman Andre Vasquez (now 40). Rep. Ilhan Omar (D-Minn., age 38), too, says she was inspired to run for Congress by the Sanders campaign.

We may have seen a glimpse of the future in New York this October, where Sanders and Ocasio-Cortez shared a stage before an audience of 26,000.

Later, in a joint interview, Ocasio-Cortez was asked whether she would work in a Sanders administration. Bernie jumped in: “Yes, you would!”

This is part of a debate about whether age matters in a presidential candidate. Read the first entry, “Ageism Has No Place in a Presidential Election,“ by Susan Douglas, here.