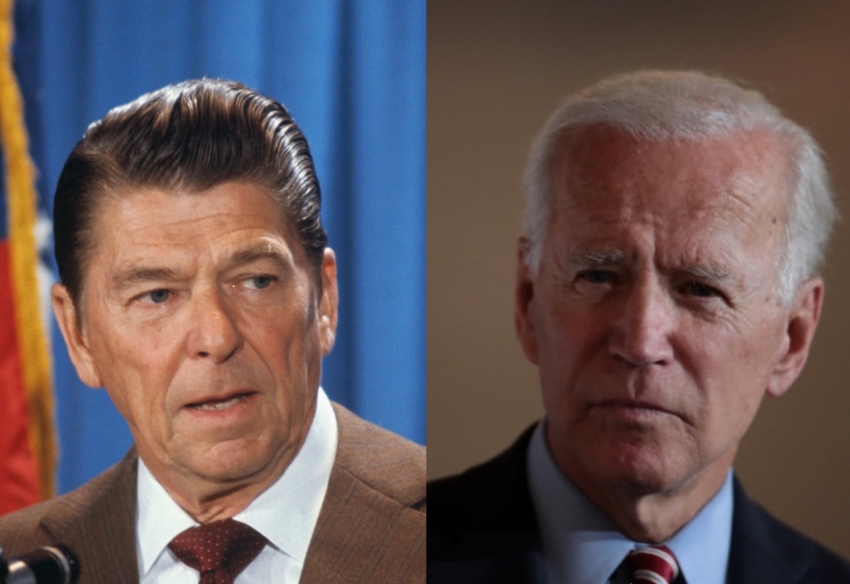 Reagan Lives On in Biden

For 40 years, Biden has pushed to cut federal spending. In a recession, don’t expect him to prime the pump.

Biden fended off Republican challenges to his seat by embracing right-wing economic doctrine.

Amid warnings of a coming global recession, it’s worth asking what the 2020 presidential aspirants would do during an economic downturn. When it comes to Joe Biden, we may already know.

Biden’s formative political years were spent in the shadow of economic crisis. After more than a decade of economic expansion and blissful, carefree consumerism, recession hit in 1973, the same year Biden entered the Senate. Two years later, 2.3 million jobs had disappeared. Americans also had to contend with runaway inflation that reached double digits by 1974. The United States had barely exited that recession when it plunged into another one in the early 1980s, with unemployment climbing past 10% by 1982.

During this economically turbulent decade, Biden fended off Republican challenges to his seat by embracing right-wing doctrine—specifically, that restraining federal spending is more important during economic downturns than priming the pump.

This fiscal austerity would become a core conviction of Biden’s and help animate a lifelong belief that compromise and reaching across the aisle are the perennial solution to what ails America.

Biden had always been a somewhat ambivalent New Deal liberal—fretting about government spending as early as 1975, even as he garnered positive scores from liberal groups for his voting record—but the recession and his time in the halls of power nudged him in a more conservative direction.

“I must acknowledge that when I first came to the U.S. Senate at age 29, not too long out of college, many economists had been telling me why deficit spending was not all that bad,” he told the Senate in 1981.

“So I was not very convinced of the arguments made by my friends here, who I must acknowledge, were mostly on the Republican side of the aisle.” But, he went on, “as I listened over the years in this body, I became more and more a believer in balanced budgets.”

By the close of the 1970s, Biden began calling himself a fiscal conservative and introduced what he called his “spending control legislation”: a bill requiring all federal programs to be reauthorized every four years or automatically expire. He also voted for a large but unsuccessful tax cut introduced by Sen. William Roth, his Republican counterpart.

Ronald Reagan took office in 1981, pioneering the economic program of generosity to the rich and stinginess to the poor that became known as Reaganomics. Biden was right there with him.

Biden, Reagan and other conservatives pushed the flawed idea that the government is like a household and must take drastic measures to pay off debt to stay solvent. Six months into Reagan’s first term, Biden called the reduction of deficit spending “the single most important” path toward “an economically sound future.”

To curtail government spending, Reagan severely scaled back or eliminated federal programs—even as he slashed tax rates for the rich. Biden voted for both (including an updated version of Roth’s failed tax cut). When the president proposed a budget freeze in 1983—to cut the enormous deficits that, ironically, his tax cut helped produce—Biden one-upped him, working with two Republican senators to propose an even more aggressive budget freeze doing away with scheduled cost-of-living increases for Medicare and Social Security.

This idea is contrary to what economists and experience tell us is the proper course of action in times of economic downturn. Economist Joseph Stiglitz credits Obama’s 2009 big-spending stimulus for ameliorating the recession (criticizing it only for being too small) and criticized austerity politics for undermining it. Meanwhile, countries like the United Kingdom and Greece stand as living monuments to the economic ravages of budget cutting during a recession, something even the International Monetary Fund belatedly acknowledged.

The economy under Reagan did recover—even as he slashed programs for the poor and vulnerable, he ramped up defense spending, in effect creating an economic stimulus much larger than what would come in the wake of the Great Recession.

Meanwhile, Biden voted three years in a row for a constitutional amendment requiring a balanced budget. When the 2008 financial crisis plunged the world into recession, Republicans again called for cuts to entitlement programs. As ever, Biden stretched out a bipartisan hand. As Obama’s lead negotiator during the “grand bargain” negotiations, Biden—to his Democratic colleagues’ horror—capitulated to every one of Republican Sen. Mitch McConnell’s demands, including cuts to Medicare, Social Security and food stamps, and warned in 2013 that, left untouched, deficits “may become a national security issue.”

While that effort collapsed due to Tea Party obstinacy, a President Biden could get one last shot. Following the Reagan playbook, the Trump tax cuts have sent the national debt soaring, and Republicans and conservative groups are now pushing for stringent budget cuts. Biden stands alone among the leading Democratic presidential candidates in his insistence that Democrats can work with McConnell’s GOP. Add a recession into the mix and the temptation to resume what he and Reagan began may be too great. Who says the era of bipartisanship is dead?