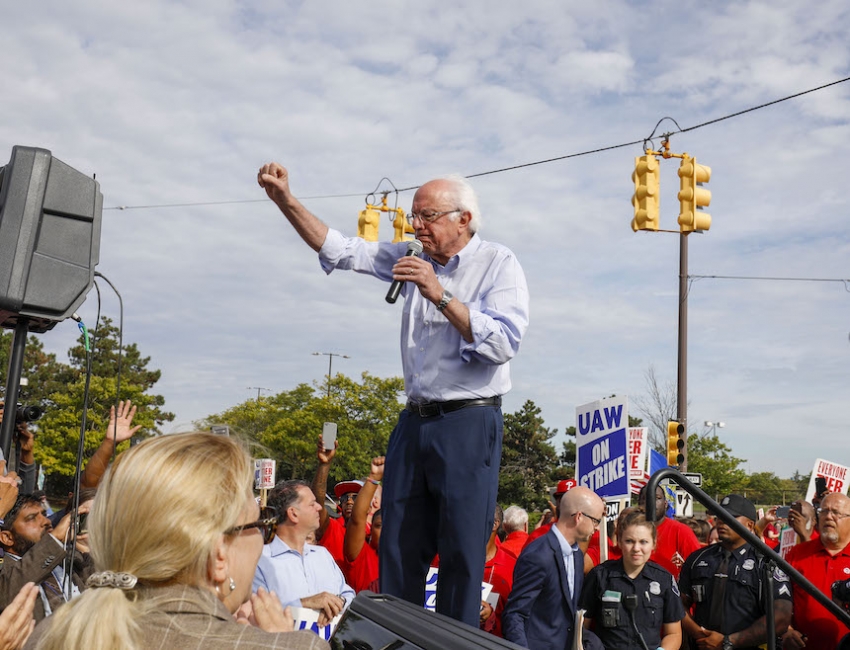 In “What a Bernie Sanders Presidency Would Look Like,” Daniel Denvir presents a comprehensive and upbeat appraisal of Bernie Sanders’ platform and its resonance with a variety of social movements, echoing the campaign’s rhetoric about the central role of popular movements and touting Sanders’ purported credentials as an organizer, not just a politician. Sanders’ 2020 campaign, like his effort four years ago, has had an undeniably galvanizing effect on the Democratic primaries and transformed the policy agenda—and the acceptable limits of political discussion—while energizing people young and old to work for positive change. But the campaign has also served to reinvigorate the persistent and dangerous myth that activists for social change should spend every fourth year subordinated to the demands of presidential elections. This myth ultimately preserves the political status quo.

Denvir points out the central role of the militant labor movement of the 1930s in winning union protections, but it was the relative independence of that movement from party politics that made this leverage possible. Frances Fox-Piven may be correct that “electoral resonance” can drive movements forward, but the U.S. electoral culture demands that movements subordinate our strategies, our goals and our language to electoral constraints, often at the expense of our movements’ integrity and militancy.

My first direct experience with this phenomenon was during the early years of U.S. Green politics. For nearly a decade before we had a national Green Party, grassroots Green activists were on the forefront of many social and environmental issues, frequently running candidates for local offices. But once presidential politics became its primary focus, the fledgling party’s movement base virtually evaporated as state-level Greens became more focused on the rules of ballot access and advancing electoral ambitions, rather than protecting air and water, challenging the spread of GMOs and defending Indigenous rights, among other issues where the Greens had made their mark. Ralph Nader’s 1996 and 2000 presidential campaigns raised a host of neglected issues, but by continuing to emphasize their quadrennial presidential campaigns, the Greens have ceased to be a viable political force.

Even should Sanders win, it is a mistake to assume Sanders’ goals line up exactly with movement demands. In Vermont, over the past four decades, Sanders has played a supportive and sometimes inspirational role in left movements, but he has rarely been a member of the organizations he publicly supports, and he has sometimes been disconnected from their demands. As mayor of Burlington, Sanders pushed for commercial waterfront development over the wishes of community members. In Congress in the 1990s, he led a controversial plan to ship radioactive waste from Vermont to a remote site in Texas, winning the enmity of both antinuclear Vermont activists and Texan environmentalists. (He has been far more committed to environmental issues as a senator.) Sanders frequently clashed with antiwar activists over his support for President Bill Clinton’s bombing campaign in Serbia. More recently, Sanders joined with Sen. Pat Leahy (D-Vt.) to bring the costly and troublesome F-35 fighter plane to the National Guard airfield on the edge of Burlington.

Still, supporters point out, Sanders’ positions on most issues are far better than the alternatives, and even since 2016, Sanders has moved left on foreign policy, criminal justice, immigration and climate change. But these shifts came in large part from pressure outside the campaign. Sanders was disrupted by Black Lives Matter protesters on the campaign trail in 2016; his pledge for a moratorium on deportations was a demand from the immigrant rights group Mijente; and his Green New Deal, far more ambitious than anything he proposed in 2016, would never exist without grassroots climate actions around the globe.

These movements are not shaping their demands around anyone’s electoral strategy, but around society’s most pressing needs. We need strong independent advocacy around those issues rather than an “organizer-in-chief” setting the agenda in the White House. Even a successful politician can only push the policy envelope so far and still win a majority. The prospect of a genuinely progressive—or even socialist—president should not lull us into the complacent belief that someone on top can make change for us.

Here in Vermont, countless progressive initiatives—even those supported by Democratic governors, such as the push for universal healthcare in the early 2010s—have been sabotaged by Republicans and conservative Democrats alike, even in a legislature fairly responsive to public pressure. An entrenched political status quo will only succumb to progressive demands when the pressure becomes overwhelming, when elites are divided, and when social and political stability are seriously threatened.

It is inevitable (perhaps necessary) that a core of dedicated left organizers and strategists will devote their energy to presidential politics, especially for campaigns like Jesse Jackson’s in the 1980s, Nader’s in the 1990s and 2000s, and Sanders’ today. But it is more essential, for those dedicated to racial justice, climate justice, gender equity, immigrant rights and combating corporate abuse, to sustain our focus on those struggles, on growing alliances among them, and on building powerful and steadfastly independent movements. If it is indeed a “political revolution” we seek, it will be driven primarily by those movements, not by even the most remarkable presidential campaign. Elected officials can and should support movements, but they cannot justly claim to lead them.

This is a response to Daniel Denvir's cover story in the January 2020 issue, “What a Bernie Sanders Presidency Would Look Like.” Read it here.

The views expressed in this piece are the author's own. As a 501(c)3 nonprofit, In These Times does not oppose or endorse candidates for political office.