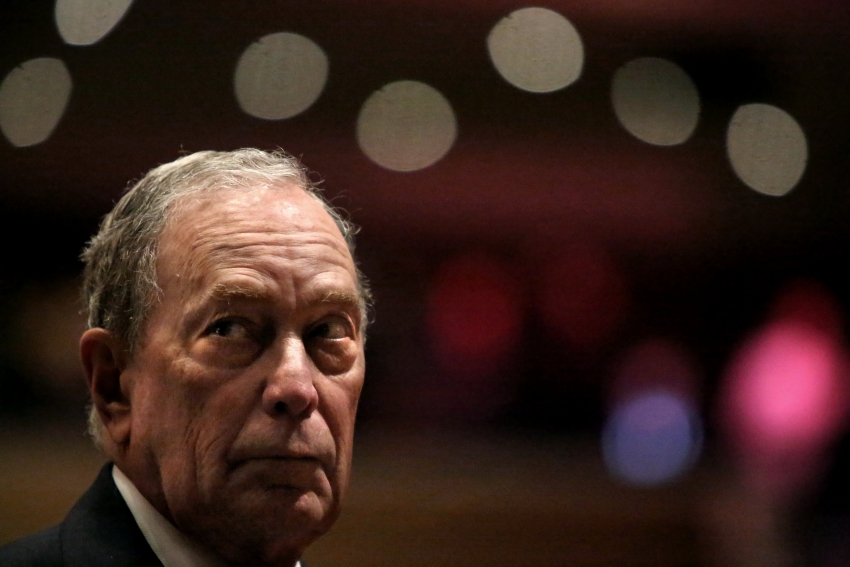 Michael Bloomberg prepares to speak at the Christian Cultural Center on November 17, 2019 in the Brooklyn borough of New York City. (Photo by Yana Paskova/Getty Images)

At What Point Does Bloomberg’s Unprecedented Ad Spending Amount to Bribery of the Media?

Bloomberg has already spent $400 million on ads, making hardly a dent in his $60 billion fortune.

It’s far from hyperbolic to suggest that Bloomberg is attempting to buy the presidency from an all-too-eager political media apparatus.

Yet these numbers are a mere sliver of Bloomberg’s totals. In fact, Bloomberg’s expenditures aren’t just astronomical; they’re unprecedented, amounting to what many critics have called an act of grand-scale bribery in pursuit of the world’s most powerful political position.

Bloomberg formally entered the presidential race comparatively late, in November of 2019. Since then, he has eschewed the traditional campaigning methods used by opponents Bernie Sanders, Elizabeth Warren, Pete Buttigieg, Joe Biden and Amy Klobuchar, such as town halls in the earliest primary states like Iowa, New Hampshire and Nevada, relying instead on a colossal advertising budget. As part of that strategy, Bloomberg reportedly plans to concentrate on highly populous Super Tuesday states like California and Texas; Florida, whose primaries are on March 17; and New York and Pennsylvania, which hold primaries on April 28.

Currently, a hefty portion of Bloomberg’s ad spending is devoted to TV commercials in preparation for Super Tuesday on March 3, when more than one-third of the electorate is expected to vote. According to data from FiveThirtyEight, the campaign has produced at least 39 commercials, costing more than $300 million as of February 14. FiveThirtyEight displays 10 ads, most of which have aired hundreds of times in Texas, California and Florida. For comparison, Tom Steyer, another billionaire in the Democratic race and the second-highest ad buyer, has spent an estimated $133 million on commercials as of February 14.

Additionally, Bloomberg has far outpaced his opponents in digital ad expenditures. The campaign has spent at least $42 million on more than 90,000 ads, according to its latest disclosures. Bloomberg’s Facebook advertising has accelerated precipitously; the campaign’s daily Facebook ad expenses are now over $1.3 million. Bloomberg’s spending reached its greatest heights in the largest states: From November 14 to February 11, the campaign spent north of $4.2 million, $5.5 million and $13.4 million in Texas, California and Florida respectively. Again, Steyer is a distant second, hovering around $100,000 per day. As of February 14, Sanders’ one-day expenditure followed at approximately $70,800; Buttigieg at $42,600; Warren at $26,000; Klobuchar at $13,800 and Biden at $7,600.

Meanwhile, as of mid-February, Bloomberg ranked first among political ad buyers on Google, with a total of 33,869 ads costing nearly $37 million. Similar to his TV and Facebook ads, Bloomberg’s Google ads appear to be courting the Super Tuesday vote. While expenditures peaked in mid-January, ad spends were again on the rise moving into February. This considerably surpasses Steyer’s campaign, the second-highest-spending Democratic campaign on Google, which has bought over $7 million worth of advertising, as well as the campaigns of Buttigieg ($6.36 million), Sanders ($5.3 million), Warren ($4.27 million), Biden ($1.64 million) and Klobuchar ($1.6 million).

The ad blitz appears to have been chillingly effective, throwing into sharp relief the immense influence the super-wealthy wield in U.S. politics. Since the ads began, Bloomberg’s poll numbers have soared. According to RealClearPolitics, Bloomberg’s polling average was 4.9% as of December 24; as of January 23, it had climbed to 7.7%. In a February 10 Quinnipiac national poll of Democratic candidates, Bloomberg placed third, at 15%. A day later, a Morning Consult poll showed the candidate had risen to 17%.

Bloomberg’s ad flurry has also been a boon to the broadcast industry. CNBC reported that Bloomberg’s spending “has created a windfall for local TV broadcasters.” The report elaborated: “Shares of publicly traded companies that own local broadcasters have also risen a welcome surprise for an industry that’s being eroded by digital media. Shares of Nexstar Media Group, the largest of the local broadcasting companies, are up over 20% since news of Bloomberg’s run broke in late November. Shares of Gray Television are up about 10%.”

Other broadcast corporations have confirmed Bloomberg’s effect on their profits. According to The Intercept, Christopher Ripley, president and CEO of Sinclair Media Group, which owns over 190 television stations throughout the United States, said the “amount of fundraising that’s happened through this year has broken all records.” He added that Sinclair is “already benefiting tremendously from that and the entrance of players like Bloomberg.” In addition, Patrick McCreery, an executive of media firm Meredith Corporation, said, “Bloomberg is certainly having an impact across most of our footprint.” This means that media channels—in addition to Bloomberg L.P., the mass media company Bloomberg owns—have an incentive to prolong Bloomberg’s candidacy in a blatant conflict of interest.

Bloomberg’s ability to spend with such abandon stems from his personal wealth, which is the sole source of his campaign funding. The billionaire—a former Republican whose ideology has manifested in rank racism, transphobia, misogyny and animus toward the poor—touts this donor-free model as proof of his financial and ideological independence from “special interests.” But his strategy to fund his own candidacy is no sign of virtue; Bloomberg has a record of leveraging his monstrous wealth into political viability.

On account of his self-funding, Bloomberg didn’t qualify for the Democratic presidential debates in November, December, January and early February, which required participants to reach a certain threshold of donations. Yet, last January, the Democratic National Committee suspiciously eliminated the fundraising criteria for the next debate on February 19, replacing it with a minimum polling requirement of 10 percent in four polls released from January 15 to February 18, or 12 percent in two polls conducted in Nevada or South Carolina—a benchmark Bloomberg has met, thanks entirely to his plutocratic status.

This dovetails with Bloomberg’s history of purchasing political alliances. Through a series of so-called philanthropic municipal initiatives, including grants and other monetary “support packages,” Bloomberg has ingratiated himself with current and former mayors throughout the country, garnering endorsements from at least two dozen officials, including Washington, D.C. Mayor Muriel Bowser; San Francisco Mayor London Breed; and former Flint, Michigan Mayor Karen Weaver. According to the New York Times, at least four of his endorsers received funding from Bloomberg “worth a total of nearly $10 million.” Accompanying the endorsements, appropriately enough, is an outpour of uncritical media coverage.

It’s far from hyperbolic to suggest that Bloomberg is attempting to buy the presidency from an all-too-eager political media apparatus. If recent developments are any indication, it’s likely that Bloomberg’s visibility will only grow for the foreseeable future. As that happens—if indeed it does—it will be imperative to question why it was ever allowed.